Chromosomal Instability as a Potential Marker of Radiation Sensitivity

Chromosomal instability (CIN) is an ongoing rate of chromosome mis-segregation that occurs over the course of multiple cell divisions resulting in aneuploidy, or the presence of an abnormal number of chromosomes in a cell. CIN has long been recognized as a hallmark of tumors, each of which has a unique level and type of CIN.

Low rates of CIN may be weakly tumor promoting while very high CIN rates may lead to cell death due to loss of both copies of one or more essential chromosomes. Researchers have found what appears to be a range of CIN that allows for optimal tumor cell fitness, but when CIN rates increase beyond a maximally tolerated threshold, cell death results.

It has been shown that combining two independent insults that each cause low CIN rates results in high CIN rates, cell death and tumor suppression. Ionizing radiation is one such insult (it is known to induce CIN) and is one of the main modalities used to treat both cervical and head and neck cancers (HNC).

As part of her 2019 RSNA Research Fellow Grant, Pippa Cosper, MD, PhD, now a radiation oncologist and assistant professor in the Department of Human Oncology at the University of Wisconsin, Madison, hypothesized that tumor cells with increased baseline levels of CIN would be more sensitive to radiation.

“Cancer cells with inherent mitotic errors, or CIN, already make some mistakes when dividing but these are generally tolerated. If this rate of error is increased above a certain threshold, the daughter cells will die because they have lost too many essential chromosomes,” Dr. Cosper said. “Radiation itself causes these errors, so the principle is that cells with a slightly higher baseline level of CIN before treatment will be closer to their maximally tolerated threshold. Therefore, when they are hit with radiation, the rate of mitotic error increases beyond that threshold, leading to cell death. Conversely, radiation may not be able to increase CIN levels above the tolerable threshold in cells with very low pre-existing CIN, implying these cells are more likely to survive treatment and have potential to repopulate a tumor.” 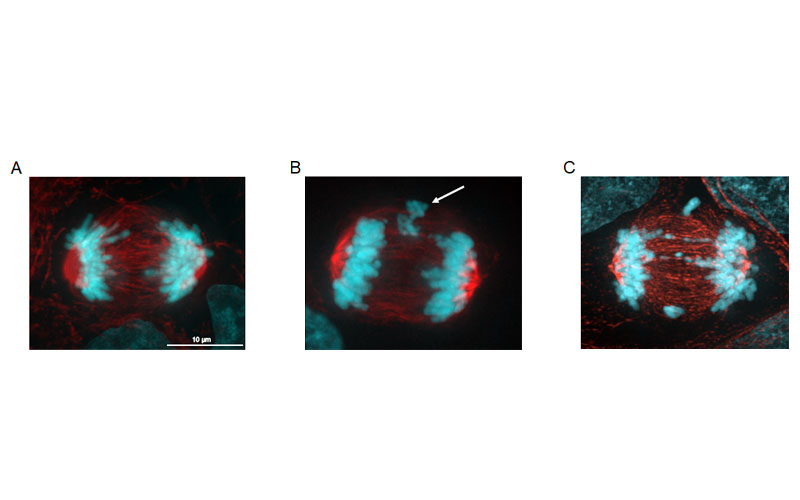 Research Identifies Cells That Are More Sensitive to Radiation

To test this hypothesis, Dr. Cosper and her team generated isogenic HPV+ and HPV- CIN and non-CIN cervical and HNC cells using tetracycline-inducible expression of the mitotic checkpoint protein Mitotic Arrest Deficient 1 (Mad1), a process which induces CIN. These isogenic cell lines were used to determine if CIN sensitizes HNC cells to radiation in vitro and in vivo.

“I found that there was a much higher recurrence rate for patients with tumors with CIN rates below the median and a very low recurrence rate (<10%) for patients with CIN rates above the median,” Dr. Cosper said. “This is consistent with my preclinical work showing that tumor cells with higher baseline levels of CIN are more sensitive to radiation.”

This research and general principle that CIN may influence cancer cells’ sensitivity to radiation is applicable to many other cancers because CIN is very common in most cancer types, according to Dr. Cosper. She plans on expanding her research to include other cancer types and delve into specific types and mechanisms of CIN as well.

“Research of this type is designed to make a more personalized radiation therapy prescription, based on each patient’s tumor biology, rather than giving every head and neck cancer patient the same dose, which is what is done now,” Dr. Cosper said. “For example, we could potentially select patients within HPV+ or HPV- cohorts with tumors with higher CIN rates that could be cured with less radiation, thereby potentially sparing them severe side effects. Conversely, patient tumors with very low baseline CIN levels may need more treatment, such as with a CIN-inducing drug in combination with radiation, to achieve a complete response.”

The R&E Foundation grant was instrumental in getting this research off the ground, according to Dr. Cosper, as it allowed her to hire a technician to help with the research.

“I used the preliminary data obtained from this research to apply for an NIH K08 award, which I was awarded in 2021. This will fund me for five years where I can continue to expand this line of research to study how individual tumor biology affects radiation therapy response with the goal of personalizing radiation prescriptions,” Dr. Cosper said. “In addition, because of these grants I was promoted to assistant professor and started my own lab, which is incredibly exciting.”

Learn more about the R&E Foundation and how you can invest in the future of radiology.