The following are highlights from the current issues of RSNA’s peer-reviewed journals.

Cranial US in Infants Exposed to Zika Virus: The NATZIG Cohort

Zika virus infection during pregnancy may lead to a wide range of central nervous system changes. Most previous studies have assessed patients who are severely affected, usually associated with microcephaly, a hallmark of the infection. There is little information regarding the prevalence of central nervous system abnormalities in infants with normal head size. Moreover, studies addressing neuroimaging findings as primary outcomes of the offspring of mothers infected with Zika virus are variable regarding inclusion criteria.

“Lenticulostriate vasculopathy (LSV) was more common in the Zika virus– exposed infants than in the control infants. Except for LSV, the frequency of mild cranial US findings was not significantly different between the Zika virus–exposed infants and the control infants. Further studies are needed to evaluate the potential clinical significance of LSV and other mild cranial US findings in infants exposed to Zika virus,” the authors conclude. 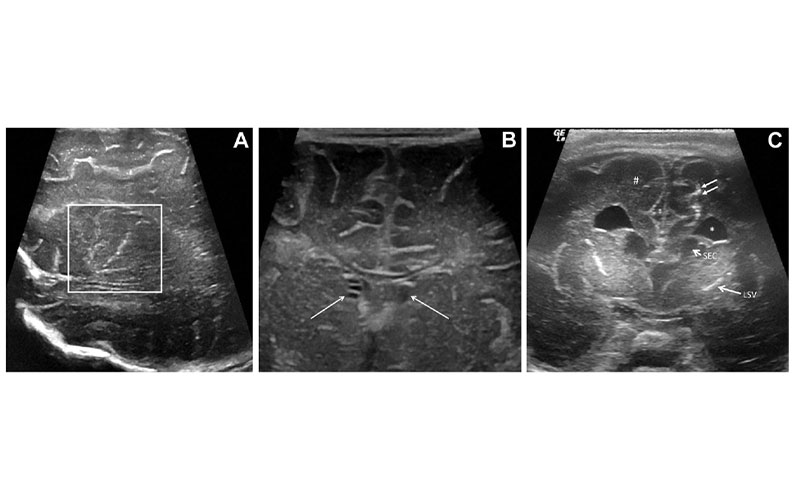 Gastrointestinal (GI) bleeding is a common potentially life-threatening medical condition that frequently requires multidisciplinary collaboration for proper diagnosis and management. CT aids identification of the location and cause of bleeding and is an important complementary tool to endoscopy, nuclear medicine, and angiography in evaluating patients with GI bleeding. For radiologists, interpreting CT studies in patients with GI bleeding can be challenging owing to the large number of images acquired and the diverse potential causes of the bleeding.

Some causes of GI bleeding are not visible on CT images, in which case identifying contrast extravasation or highly attenuation intraluminal blood can help to direct patient treatment. The most common CT pitfall that mimics active contrast extravasation is the presence of hyperattenuating material in the bowel loops. The use of a consistent search pattern can optimize detection and characterization of GI bleeding. The ideal way to review CT images in the picture archiving and communications system is to link the noncontrast and arterial and venous phase images in the axial, coronal, and sagittal planes and review images from the three phases and three planes in synchrony.

“This pictorial review provides a practical resource for radiologists interpreting GI bleeding CT studies so that their interpretation and radiology reports can be clear and concise and facilitate prompt clinical management,” the authors write. 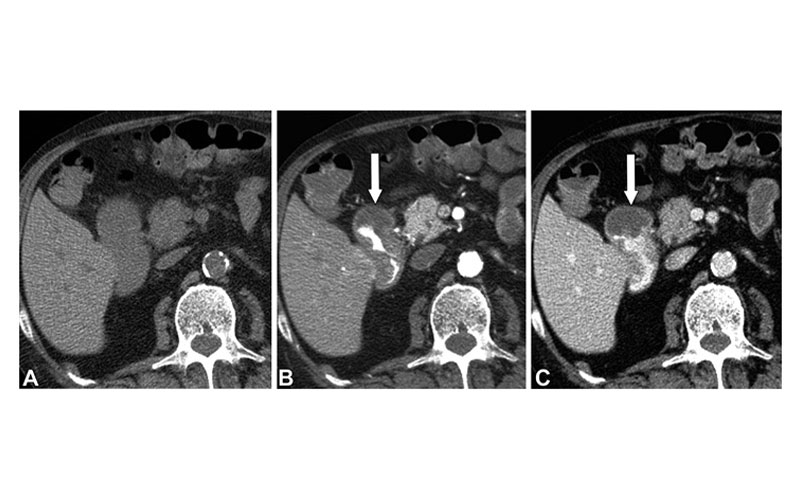 Active bleeding in the proximal duodenum, which was caused by two bleeding duodenal ulcers that were identified with endoscopy (not shown), in a 71-year-old man who presented with melena, hypotension, and shock. (A) Axial noncontrast, (B) arterial phase, and (C) portal venous phase CT images show contrast extravasation in the proximal duodenum, which appears in the arterial phase (arrow in B) and changes in size, attenuation, and shape in the portal venous phase (arrow in C). The bleeding duodenal ulcers noted at endoscopy were not visualized on CT images.

Anatomic Variations of the Hepatic Artery in 5,625 Patients

In a study in Radiology: Cardiothoracic Imaging, Tae Won Choi, MD, Seoul National University Hospital, Republic of Korea, and colleagues analyzed the origin and anatomic course of the hepatic arteries by using digital subtraction angiography (DSA) and multidetector CT and to define aberrant hepatic arteries. Patients underwent liver CT and chemoembolization, and the CT and DSA images were reviewed to evaluate the visceral arterial anatomy for variations in the celiac axis and hepatic arteries.

Right hepatic arteries were categorized as being aRHAs, if originating from the proximal to middle common hepatic artery, gastroduodenal artery, superior mesenteric artery [SMA], celiac axis, aorta, splenic artery or left gastric artery [LGA] or as being aLHAs, if arising from the LGA, celiac axis, aorta, or SMA. The prevalence of aRHAs and the prevalence aLHAs were similar. Patients with an aRHA were more likely to have an aLHA than those without an aRHA and patients with an aLHA were more likely to have an aRHA than those without an aLHA.