Radiology among specialties evaluating processes to create an inclusive environment

This is the fourth in a series of articles addressing health care equity and the solutions radiology can implement. Read part one, part two and part three. View the health care equity infographic for details on how RSNA is working to promote diverse representation across the profession and within its leadership.

The results of a 2020 survey of more than 500 transgender patients highlighted the challenges that can occur in the imaging suite.

In the survey, published in the American Journal of Roentgenology (AJR), 70% of respondents reported at least one negative imaging encounter involving physical and/or psychological trauma. That compares unfavorably to results from a 2015 National Center for Transgender Equality survey, in which one-third of transgender patients reported having at least one negative experience with a health care provider.

“Something is happening behind the closed doors of the radiology department that is not serving transgender patients well,” said study coauthor Justin Stowell, MD, a thoracic radiologist and assistant professor of radiology at the Mayo Clinic, Jacksonville, FL.

While more invasive procedures like pelvic ultrasound in transgender male patients were highly correlated with negative experiences, 1 in 5 patients reported experiencing psychological trauma from noninvasive studies like CT, MRI or radiography. Comments attached to the survey suggested that much of the trauma could be stemming from what the patients were hearing from technologists.

“There were some pretty sad stories about what patients are enduring during their scans and what was being said about them,” Dr. Stowell said. “It speaks to education and sensitivity training and other things we need to do to best prepare our staff to care for transgender patients in a sensitive and appropriate manner.”

Even the most empathetic providers can make mistakes.

David Pryluck, MD, MBA, an interventional radiologist and vice chair of education and radiology residency program director at Geisinger Health System in Danville, PA, and a member of RSNA’s Committee on Diversity, Equity and Inclusion (CDEI), often tells the story of a patient encounter he had early in his career.

He was asked to attend to a transgender female patient who was getting a procedure in interventional radiology. Dr. Pryluck felt that as the only gay attending physician on staff, he would be well suited to understand the patient’s concerns.

However, the patient had been frustrated with her care prior to their encounter and proved to be challenging, and as the discussion grew heated, Dr. Pryluck mistakenly referred to the patient as “sir” twice. He apologized both times, but the damage had been done.

“It’s amazing how when conversations are excited and emotions are high our minds don’t always allow us to use the pronouns we know we should be using,” Dr. Pryluck said. “And I — as someone who should know better and does know better — slipped, and I saw how hurtful it was.”

From that day on, Dr. Pryluck has worn a rainbow sticker on his ID badge as a way of signaling to his patients that he is an ally.

“We as radiologists have an obligation to address the barriers to care that impact the transgender community,” he said. “It’s our responsibility to help raise awareness for this patient population and create as welcoming and inclusive an environment as possible.” 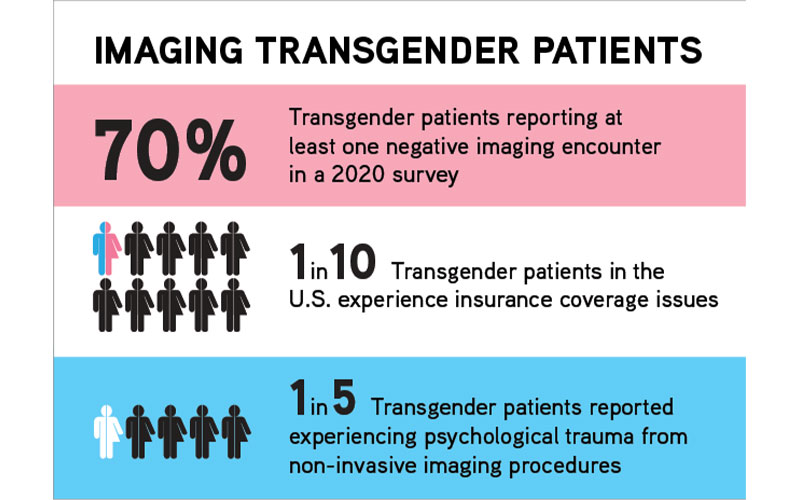 Inclusivity Starts at the First Encounter

Opportunities to create an inclusive environment start well before the imaging encounter.

In waiting areas, all-gender or gender-neutral restrooms and reading material and postings that are affirming to LGBTQ+ patients go a long way toward making transgender patients comfortable.

Intake forms should include information about the patient’s sexual orientation and gender identity, what their personal pronouns are, and if they have a chosen name that’s different from their legal name.

“All of that information is critically important up front and from there it’s vital to make sure the information is pulled through to everyone else in the department so they use the correct name and pronouns,” said Evelyn Carroll, MD, body imaging and intervention fellow at the Mayo Clinic in Rochester, MN. “A lot of patients have not yet legally changed their name so it might be different from what’s in the medical records. That happened to me for a good portion of my transition.”

Dr. Carroll began her transition early last year during her residency at Mayo. While her colleagues were highly supportive, they could not shield her from some negative experiences, like when her primary care practitioner failed to ask what her personal pronouns were after she came out to him as transgender, and then he assumed what they were in the visit note.

“It was always a little awkward having to educate some of my providers about me being transgender and what that meant exactly,” Dr. Carroll said. “I remember going to the pharmacy to pick up prescriptions before my name was legally changed, and they would call out my old name or address me by my old name, which was disheartening.”

Name changes can also create insurance problems for transgender individuals, such as when an insurer refuses to cover a screening mammography for a trans man (assigned female at birth) because they have a male name on their legal documentation.

“In our survey, about 1 in 10 transgender patients had problems with insurance coverage in the U.S. because of their gender identity, compared with none in other

In 2018, RSNA launched the CDEI, the same year the American College of Radiology (ACR) started a workgroup on gender diversity under the Commission for Women and Diversity. Recently, ACR published appropriateness criteria for transgender breast cancer screening, something for which Dr. Stowell has advocated.

Journals including RadioGraphics, AJR, and Skeletal Radiology have featured important articles on imaging findings and potential complications in the transgender population. For example, those who are assigned male sex at birth but identify as women may receive estrogen, which can affect bone health and the interpretation of DEXA scans.

patients. For Dr. Pryluck, who is on the workshop’s panel, the event feels like a milestone.

“It’s made me reflect on how my career started and how, when applying to radiology residencies, I kept my being gay a secret, and as a resident how I felt alone in the experience,” he said. “To be part of this panel and this session 15 years later is

The efforts by Dr. Pryluck and others in radiology to reduce barriers to care for transgender individuals reflects a larger phenomenon.

Last year, a tweet Dr. Carroll posted about bringing her authentic self to work for the first time received more than 17,000 retweets and 365,000 likes. Although Dr. Carroll says the attention on social media can be unnerving, she has no plans to stop speaking on the issue of transgender equality.

“As one of the few trans women in medicine, I’m happy to step in and educate and advocate when a voice is needed, because I am passionate about this issue and I want to help make things better,” she said.

Access the American Journal of Roentgenology study at ajronline.org.