In 1949, radiologist Leo Henry Garland, MD, former RSNA president, published his first of several articles on errors in radiology. Among his findings, Dr. Garland discovered that experienced radiologists would miss important findings in approximately 30% of chest radiographs positive for radiologic evidence of disease. The ensuing decades saw the development of contrast agents, the introduction of CT and MRI, and other major advances.

But despite these technological advances, along with vast gains in knowledge about human biology and disease processes, error rates in radiology have remained largely unchanged from Dr. Garland’s time, according to Michael A. Bruno, MD, vice chair for quality and safety, and chief of emergency radiology at Penn State University.

“We have a field that a radiologist of 1949 would not recognize and yet the error rate is the same,” Dr. Bruno said. “That suggests that what we’re dealing with is a human factor that doesn’t change with improved technology or improved knowledge.”

The human factor encompasses a wide range of sources for perceptual errors that occur when an abnormality is not seen on initial interpretation. A fatigued radiologist or one who is being rushed might miss an abnormality. Interruptions in the reading room can also throw radiologists off their routine.

“If you are interrupted in the middle of reading a CT, you may forget where you left off and then forget to go back and look at something that you would have seen if you were not interrupted,” said Bettina Siewert, MD, vice chair for quality and safety in the Department of Radiology at Beth Israel Deaconess Medical Center in Boston.

Dr. Siewert, who has written extensively on the human factors behind errors, notes that some of these events become more likely in a time when radiology workloads are increasing.

“In this time of the COVID-19 pandemic, we are experiencing unprecedented short-staffing,” Dr. Siewert said. “You have to go faster and it’s easy to miss things.”

“We have a field that a radiologist of 1949 would not recognize and yet the error rate is the same. That suggests that what we’re dealing with is a human factor that doesn’t change with improved technology or improved knowledge.”

Outsourcing and Bias Can Result in Errors

Trends toward teleradiology and remote reporting accelerated by the COVID-19 pandemic also may increase the risk of errors, most commonly through deficits in communication.

A 2017 United Kingdom audit published in Clinical Radiology looked at emergency abdominal CT interpretation in patients presenting with non-traumatic abdominal pain. The rate of major discrepancy between the imaging diagnosis and the ultimate clinical diagnosis was three times higher when those CTs were reported by off-site reporters than when reported by on-site consultants.

The less common types of errors that occur when a finding is seen but attributed to the wrong diagnosis often can be traced to cognitive factors like anchoring bias, where the radiologist is biased toward finding confirmatory evidence for a preconceived idea instead of calling it into question even when there is opposing information.

The “Biology” Behind Human Errors

But the primary culprit for radiology errors, according to Dr. Bruno, is something a very long time in the making: our own neurobiology.

“Humans did not evolve through millions of years of selective pressure to practice radiology,” Dr. Bruno said. “Our eyes and brain are not optimized for it; it’s actually amazing that we do as well as we do.”

Using eye-tracking technology, Elizabeth Krupinski, PhD, professor and vice chair for research in the Department of Radiology and Imaging Sciences at Emory University School of Medicine in Atlanta, and colleagues found that the radiologist actually looked at the abnormalities, in some cases several times, but still had no mental awareness of it.

“It’s not that these radiologists are lax, lazy or reviewed an image too fast,” Dr. Bruno said. “Most of the time, it’s none of those things. It’s a potential neurocognitive factor that we don’t completely understand. It’s not that our eyes blink. It’s that our brain does.”

Dr. Bruno continues to research the neurocognitive underpinnings of perceptual error and anticipates important breakthroughs in our understanding of these processes in the next 10 years.

“The quality of the light in the room, the quality of the images, all those things matter and should be optimized, but until we really understand something about the underlying human factors we’ll only be able to improve error rates a small amount,” he said.

“Root cause analysis can be used to adjust the radiologist’s workflow, by limiting the number of interruptions, standardizing processes and developing checklists and forcing functions,” Dr. Siewert concluded. “The creation of new communication pathways ensuring increased exchange of information between all team members will have additional impact on decreasing error rates in the future.” 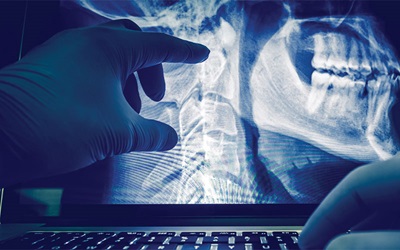 Balancing the “Human” in Human Errors

These underlying human factors cannot be ignored hoping, for example, that artificial intelligence and related tools will solve the problem, according to Dr. Krupinski.

“Simply adding more information to already complex tasks and images may not reduce as many errors as many are hoping that it will. We need to consider how and why AI can alter the human decision-making process and develop tools that synergize the radiologist-AI interaction,” Dr. Krupinski said.

Fundamentally, the practice of radiology is still a human enterprise, concluded Dr. Bruno, as such it is subject to the limitations of the human beings involved.

“A deeper understanding of the human factors that lead to errors will be the key to reducing their incidence,” Dr. Bruno said. “Finding ways to detect errors promptly when they inevitably occur will be the key to preventing patients from being harmed.”

Dr. Brady summed up his thoughts by quoting Sir William Osler from over a century ago, who said, “Errors in judgment must occur in the practice of an art, which consist largely in balancing probabilities.” “This perfectly describes the work of diagnostic radiology, and the inherent uncertainty underpinning it,” Dr. Brady said. “Some errors are inevitable; it’s only by understanding why and how they occur that we can adapt our work to minimize their number and impact.”