In the U.S. each year, 1.6 to 3.8 million concussions occur, with up to 80% of patients experiencing acute vestibular symptoms such as dizziness, nausea, mental fog and physical imbalance. In a subset of these patients, vestibular symptoms persist beyond the acute phase, creating barriers to daily life activities and increasing costs on the health care system.

“When a patient experiences vestibular symptoms on a daily basis, it can be very debilitating,” Dr. Trofimova said. “The symptoms can be provoked by any routine activities that encompass visually rich stimuli, such as going to the grocery store. Patients then require assistance with these activities, or just stop doing them altogether.”

Dr. Trofimova emphasizes that it is often assumed that patients with mTBI do not experience significant or long-term sequelae of their injuries. Also, routine structural brain MRI usually appears normal after concussion. Despite this, some patients develop persistent chronic VVS symptoms. Dr. Trofimova believes that her research will help to advance the understanding of the underlying mechanisms and explain why symptoms persist. These data could also be used for the development of personalized rehabilitation techniques. Through treatment, it may be possible to reverse vestibular impairment and prevent chronic VVS. 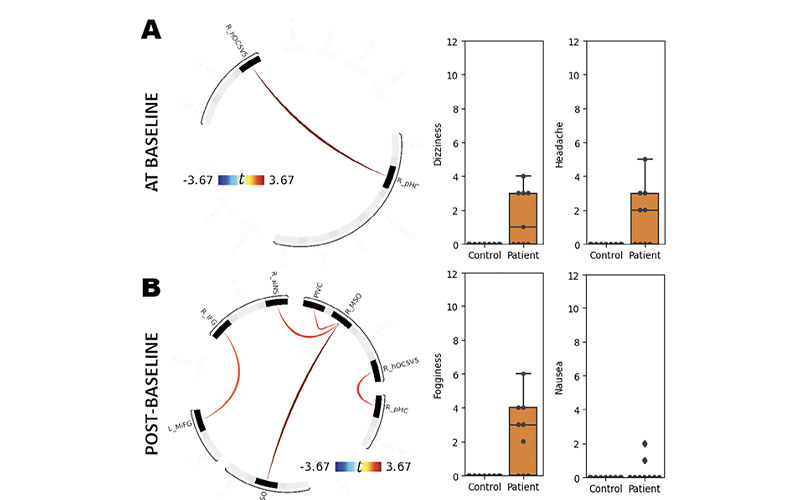 In collaboration with her mentors, Jason W. Allen, MD, PhD, and Russell Gore, MD, and with the support of the Shepherd Centre in Atlanta and the Georgia Institute of Technology Center for Advanced Brain Imaging, Dr. Trofimova developed a novel vestibular paradigm task-based functional MRI (t-fMRI) technique to compare functional brain connectivity of patients with VVS symptoms to that of healthy controls.

During t-fMRI, participants were shown short videos portraying scenarios containing visually complex stimuli, such as a busy street in a large city, that were designed in collaboration with vestibular neurologists. These videos were interspersed randomly with videos of less visually stimulating scenery, such as a calm sea without waves.

In addition to capturing MR imaging data, the researchers also collected data from participants regarding the type of symptoms they experienced during the videos, and their severity, through the use of handheld recording devices.

“The novel vestibular paradigm allows us to collect task-based functional brain connectivity information, as well as link each particular video to a patient’s clinical response,” Dr. Trofimova said. “Using this approach, we can track which symptoms are provoked by each video and correlate with the pattern of functional brain activation.”

She notes that healthy controls remain predominantly asymptomatic during this task, and thus the data regarding their brain connectivity is useful for comparison.

It is hoped that with enough imaging data, patients’ responses to various rehabilitation therapies may become highly predictable. This may make it possible to treat specific connectivity issues and symptoms caused by vestibular impairment with targeted rehabilitation therapies, thereby increasing positive patient outcomes and decreasing cost.

One interesting preliminary finding included observations regarding the vestibular system’s processing in the brain. These observations are notable because consensus does not currently exist about how vestibular information is mapped within the cortex. The researchers now have hypotheses as to the dominant hubs and nodes in the vestibular network.

Another somewhat unexpected preliminary finding in the research was that the experimental group experienced increased brain connectivity between the dominant vestibular network hubs compared to the control group.

“This may in part be representative of altered multisensory processing causing increased weighting of visual and vestibular stimuli,” Dr. Trofimova said. “Compared to healthy controls, patients with mTBI experience increased activity with the cortical networks involved in visual and vestibular stimuli processing. In other words, symptomatic patients exert much more effort to process the same vestibular information than healthy controls.”

“There are patients that undergo vestibular impairment therapy who do experience recovery, and there are some who don’t improve as much as we would like,” Dr. Trofimova said. “What we are lacking at this point is understanding what exactly those therapies do to the brain connectivity. Through gathering more imaging data, could we predict from the beginning, before even applying therapy, which vestibular rehabilitation technique will be most effective as well as what the outcomes will be? That’s probably the biggest question, and we have a long journey ahead of us to try and answer that question."