Despite its effectiveness, colorectal cancer screening has been underused, in part because of patient concerns over the invasiveness of optical colonoscopy.

CT colonography (CTC), sometimes referred to as virtual colonoscopy, offers a less invasive alternative that provides similar detection rates to those of optical colonoscopy for high-risk pre-cancerous polyps. However, challenges related to CTC technique and the anatomy of the colon have driven some variation in performance among radiologists.

In the wake of the findings, Dr. Plumb and colleagues designed a new study to assess the impact of training on radiologist performance.

“The 2022 Radiology study was designed to answer two main questions,” Dr. Plumb said. “Was there significant variation in radiologist CTC reporting accuracy, and if so, could we increase diagnostic sensitivity by providing focused individualized training and feedback to these radiologists?” 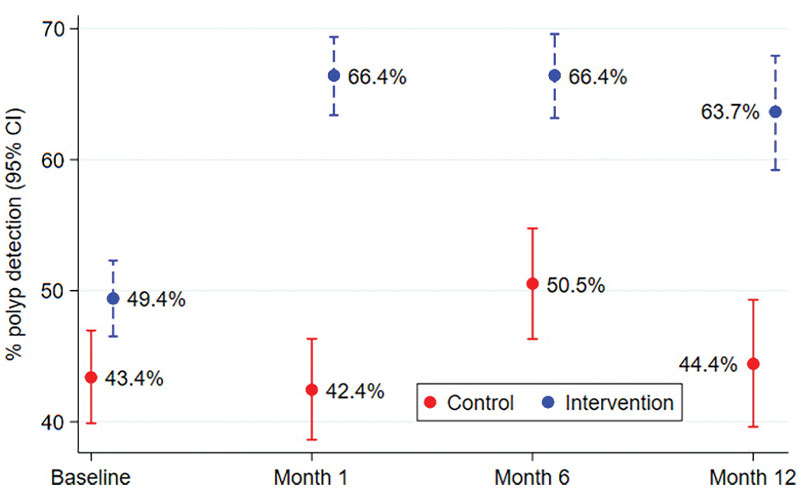 Per-lesion detection of colorectal cancer or lesions 6 mm or larger at each test time point for the control and intervention arms, with corresponding 95% CIs. Radiologists who dropped out before reaching the 1-month time point were omitted from the baseline calculations.

The researchers randomized radiologists into two groups. The first group, comprising 80 radiologists, received a day of training in CTC reporting. They practiced at various stations, each focused on a specific topic such as flat lesions, non-neoplastic mimics and fold-related lesions.

“These stations had multiple examples of true lesions and pitfalls, with every station overseen by an expert faculty member who delivered the training in a 1:1 or maximum 1:2 ratio in a very hands-on, interactive manner,” Dr. Plumb said.

The remaining 59 radiologists received no training.

Flat lesions were more likely to be detected by radiologists who received training. The positive effect of training was not associated with prior CTC career experience.

Dr. Plumb attributed the improved performance to the motivation of the radiologists and the design of the training. Radiologists in the training arm received constant feedback and interaction after the workshop, if desired, with detailed breakdown of their performance relative to their colleagues in the cohort. The training emphasized a standard approach to case navigation with an initial 3D read followed by 2D axial, coronal and sagittal interpretations.

While training is vital to CTC interpretation, other factors must be taken into consideration when seeking to optimize radiologist performance, according to Perry Pickhardt, MD, chief, gastrointestinal imaging from the Department of Radiology at the University of Wisconsin School of Medicine and Public Health and medical director of oncological imaging, UW Carbone Cancer Center, both in Madison.

Dr. Pickhardt, writing in an accompanying editorial, pointed to the use of positive oral contrast material for fluid and stool tagging as being critical to boosting the performance of less-experienced radiologists.

A Department of Defense CTC trial led by Dr. Pickhardt found that the combination of oral contrast material tagging and robust 3D polyp detection delivered excellent diagnostic performance, despite the lack of any prior formal training for the radiologists involved.

“By using this approach in clinical practice, we have found that interobserver variability in the detection of large polyps at CTC screening is much less than the performance spread observed at optical colonoscopy,” Dr. Pickhardt said. “With this approach, CTC also dominates over the stool-based tests in both clinical efficacy and cost-effectiveness.”

“The value of CTC screening can be further enhanced by leveraging body composition data for osteoporosis and cardiometabolic screening available in every abdominal CT scan,” Dr. Pickhardt said.

“The 2022 Radiology study was designed to answer two main questions: Was there significant variation in radiologist CTC reporting accuracy, and if so, could we increase diagnostic sensitivity by focused individualized training and feedback to these radiologists?”

Back in the United Kingdom, Dr. Plumb and colleagues are working to expand their training package beyond the research setting to see if its benefits translate to the clinic.

“In the study, we used test datasets where the prevalence of abnormality was between 50% and 60%, which is much greater than in routine practice where only around 20% of scans have a 6 mm or larger polyp,” he said. “Also, people may have been particularly rigorous in the study since they knew they were being assessed.”

Dr. Plumb’s group is also looking for factors associated with variability in missed cancer rates and how these can be minimized.