Abnormal results on a nuclear stress test are associated with a significantly increased risk of cardiac-related deaths, especially among people with diabetes, according to a multi-center study in Radiology: Cardiothoracic Imaging.

Diabetes is a devastating worldwide pandemic and a major risk factor for coronary artery disease and heart attack. Accurate cardiac risk assessment of these patients is vital, as it helps guide appropriate and potentially lifesaving treatments.

PET MPI has emerged in recent years as a promising diagnostic and risk assessment tool. Prior research backs the test’s use in evaluating individuals with suspected or known coronary heart disease. However, less is known about its value among patients with diabetes.

In the largest study of its kind to date, investigators at four centers collected clinical data on stress tests for both diabetic and non-diabetic patients and then followed them to track the occurrence of adverse events like heart attacks. The study group consisted of 7,061 participants, including 1,966 people with diabetes.

The data showed that among diabetic patients an abnormal PET MPI was associated with increased risk of cardiac death in all important clinical subgroups based on age, gender, obesity, or those with prior revascularization procedures like angioplasty. Using the data, the researchers were able to more accurately assess the cardiac risk for a significant proportion of diabetic patients.

“The data from the stress test among diabetic patients actually allowed us to better risk-stratify people in greater than 39 percent of the cases,” said study lead author Hicham Skali, MD, MSc, from Brigham and Women’s Hospital and Harvard Medical School in Boston. “Patients with diabetes remain at a significantly higher risk of cardiac death compared to patients without diabetes, and the data from a stress test helps us further stratify those at greatest risk.”

The results suggest PET MPI could help select which vulnerable patients may need immediate treatment while sparing others from unnecessary procedures.

Among people without diabetes, the study findings echoed those of previous studies that showed men face a significantly higher risk of cardiac death than women. But that wasn’t the case among diabetic patients.

“In patients without diabetes, being a woman confers a certain advantage in that their risk of death is much lower, regardless of their stress findings,” Dr. Skali said. “However, when you look at patients with diabetes, men and women have relatively the same risk of cardiovascular death, and that risk increases with worsening findings on the PET stress test.”

The data also revealed that, even when they had normal PET MPI results, people with diabetes had a similar rate of cardiac death to people without diabetes who were 10-15 years older, suggesting that younger diabetic patients may require additional tools for risk stratification. 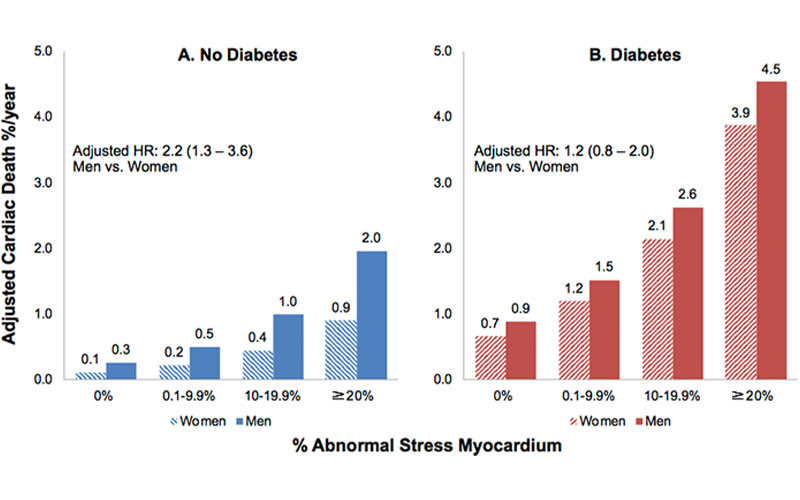 Bar charts show risk-adjusted annualized cardiac death rate in women and men, A, without and, B, with diabetes stratified according to percentage abnormal stress myocardium category. In patients without diabetes, women showed a lower risk of cardiac death than men for each scan category. In patients with diabetes, the risk of cardiac death was similar for women and men. Numbers in parentheses are 95 percent confidence intervals. HR = hazard ratio.