The number of women getting screening mammograms has increased significantly over the past 30 years, said Eric Kim, MD, diagnostic radiology resident at NYU Langone Health. 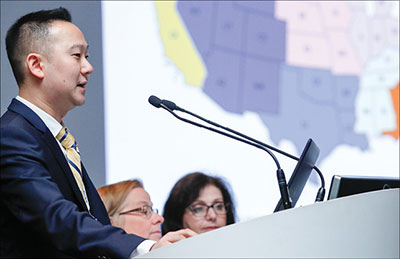 According to data from the National Center for Health Statistics, utilization of screening mammography has increased from 28.7 percent of women 40 years and older in 1987 to 65.3 percent in 2015.

However, millions of women in both rural and urban areas are still not receiving mammographic screening. Breast cancer remains the second leading cause of cancer-related deaths among women in the U.S.

“We can still do better,” Dr. Kim said during an RSNA 2018 presentation.

He said screening mammography rates for women 40 years and older in 2004 varied from 71.1 percent in rural areas to 75.4 percent in metropolitan areas. While researchers have identified a lack of access to care providers and other physical barriers as factors affecting the lower rate of mammographic screening in rural areas, less is known about urban areas.

“Studies thus far have focused on rural disparities in screening utilization,” he said. “City-level screening mammography disparities have been less evaluated, although more than 30 million adult women live in the 500 largest U.S. cities.”

To evaluate disparities in screening mammography utilization at the city level, Dr. Kim and his colleagues conducted a descriptive study using public data from the 500 Cities Project, which reports city-level data on 27 chronic disease measures in more than 103 million people.

According to the statistical analysis, the mean utilization rate for city screening mammography was 77.7 percent, with the highest utilization (82.7 percent) in the New England cities and the lowest (73.6 percent) in cities in the mountain states, a north-south corridor stretching from Montana, Idaho and Wyoming to Arizona and New Mexico.

“We found higher screening mammography utilization on the coasts in areas with higher levels of household income and insurance,” Dr. Kim said.

The study demonstrated a positive correlation between screening mammography utilization and use of preventive health screenings and with household income. Utilization was negatively correlated with obesity, poverty and a lack of insurance.

According to the researchers’ analysis, significant independent predictors of screening mammography utilization included Pap test compliance, being of Asian descent, having private insurance and geographic region of residency.

“Although the literature focuses on rural screening disparities, uptake varies at the city level throughout the country,” Dr. Kim said. “Identifying predictors of uptake may aid in targeting areas and populations for screening education and intervention.”

Next research steps for Dr. Kim include connecting city-level screening utilization with the incidence of breast cancer mortality.

Go to RSNA.org/News to watch our interview with Dr. Kim.

coverage of RSNA 2018 is available at RSNA.org/Bulletin.