A recent study in Radiology may help provide data to supplement the American College of Radiology (ACR) recommendations for follow-up of pancreatic cystic neoplasms detected incidentally on MR or CT imaging.

Management of incidental pancreatic cysts is challenging because a very small percentage of these cysts have malignant potential, yet the incidental detection rate is very high, said researcher Ihab R. Kamel, MD, PhD, a professor in the Russell H. Morgan Department of Radiology and Radiological Sciences at Johns Hopkins University School of Medicine, Baltimore, MD.

“There has always been emphasis on the size of these cysts at baseline, but we didn’t have solid long-term data, or large enough datasets, to determine how frequently and for how long we should be imaging these patients to monitor growth of the cysts,” Dr. Kamel said.

Dr. Kamel’s team sought to collect those data, retrospectively studying a total of 646 cystic neoplasms in 390 patients, who had follow-up imaging at a median of 50 months. The researchers stratified the cysts into size categories as identified in the 2017 update, Management of Incidental Pancreatic Cysts: A White Paper of the ACR Incidental Findings Committee.

Cysts measuring 15 to 25 millimeters on initial CT or MRI were most likely to show growth on follow-up, averaging 3.1 times the rate of growth when compared to smaller cysts. More than 60% of all cysts were stable for the duration of the surveillance period, while 8 percent decreased in size. Dr. Kamel explained that the cysts that decreased in size might have decompressed through a small communication with the pancreatic duct.

The research team also examined baseline characteristics including age, sex, presence of a septation in the cyst, or presence of more than two pancreatic cystic lesions. Though these factors did not appear to be associated with growth, the team did find evidence that the presence of a mural nodule (reported in 1% of cases) demonstrated a tendency for association with growth.

“The average growth for all cysts was 8.5 millimeters, with an average growth rate of 1.4 millimeters per year,” Dr. Kamel said. “What was interesting is that the very tiny cysts — smaller than 5 millimeters —didn’t show any growth for up to three years after initial detection. All cysts smaller than 5 millimeters remained stable until then, and only 13% of cysts in this size range grew over a median follow-up of 65 months. And management of these tiny cysts is usually challenging because they are so common.”

For incidental and asymptomatic pancreatic cysts smaller than 5 millimeters, the ACR White Paper suggests that doing one follow-up study at two years with CT or MRI that demonstrates stability is sufficient to stop surveillance of the cyst.

“We expected that these cysts would remain stable for a long time,” Dr. Kamel noted. “Although the majority of very small cysts remain stable, we don’t know the long-term risk associated with having such cysts.”

Dr. Kamel emphasized that surveillance decisions are best considered in the context of other risk factors for pancreatic cancer.

“Detection rate for incidental cysts is increasing because we’re using cross-sectional imaging more often,” Dr. Kamel said. “This is one attempt to have a large dataset with long-term follow-up for over a 50-month period of time to determine the rate and frequency of size change in these cysts. Hopefully we can use this information to help determine the best strategy to follow up these patients.”

Gastrointestinal (Artificial Intelligence and Machine Learning), will be held Monday, Dec. 2, at 3 p.m.

The Controversy Session: Incidental Pancreatic Cyst Management, will be held Wednesday, Dec. 4, at 7:15 a.m. The session will explore the variability among expert published recommendations for follow up of incidentally discovered pancreatic cysts.

Register here for these and all RSNA courses. 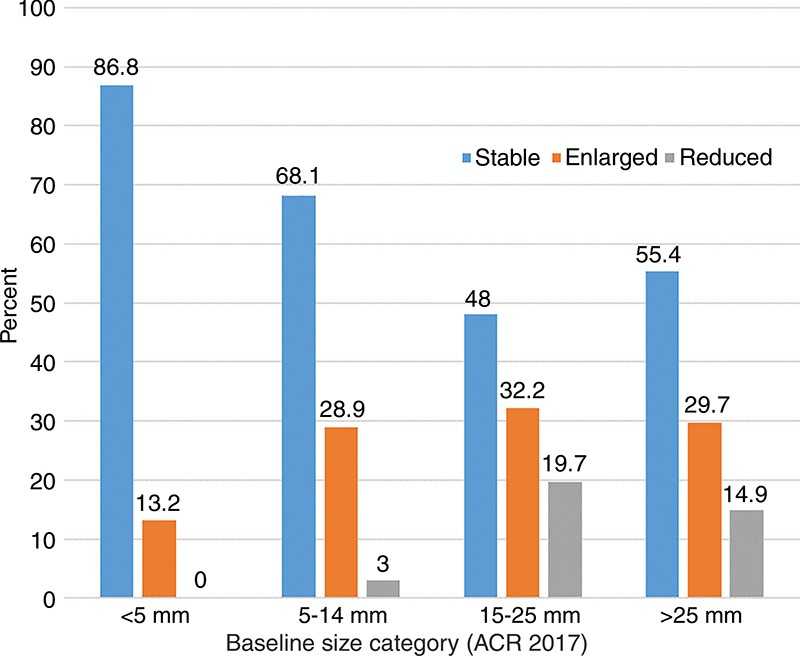 Bar chart shows the proportion of pancreatic cystic neoplasms with a size change in the baseline size categories, as defined by the American College of Radiology White Paper recommendations
Editor's Picks