Editor’s Note:This is the first in a three-part series on the 3D printing explosion in radiology.Read parts two and three.

On March 4, 2017, radiologists, scientists and vendors gathered in Scottsdale, AZ, for the second meeting of the RSNA Special Interest Group (SIG) dedicated to 3D printing and its implications for radiology.


As the SIG members discussed, debated and voted on important issues, one overarching theme emerged: radiology must play a leadership role in this diverse and growing field.

“3D printing is a direct extension of medical imaging and should be housed within the structure of radiology instead of having printers popping up everywhere like mushrooms,” said SIG chair Jonathan M. Morris, MD, an assistant professor of radiology at the Mayo Clinic in Rochester, MN. “We need a centralized program in a hospital run by radiologists, because nobody knows images better than we do.”

Rybicki
The SIG meeting came amid a period of rapid expansion for 3D printing in medicine. Applications in surgical preparation, patient-specific simulations and education are growing fast, and bioprinting is not reserved for science fiction, said Frank J. Rybicki, MD, PhD, a pioneer in 3D printing and a SIG member who organized the meeting.
“We’re in the beginning of an exponential curve in growth in 3-D printing,” said Dr. Rybicki, professor and chair of the Department of Radiology, University of Ottawa, Canada. “Things are dramatically ramping up, and when 3D printed models are reimbursed, the field will explode.”

The Birth of 3D Printing


3D printing is an adopted term for the design and generation of physical medical models that traces its roots to the 1980s, when U.S. inventor Chuck Hull patented a stereolithography apparatus.

Other pioneers like husband and wife team S. Scott and Lisa Crump and Andy Christensen advanced the field through the 1990s. But penetration of 3D printing into the clinic was slowed by a lack of computing and imaging power, according to Dr. Morris.

Over the past decade, in conjunction with improvements in computing and imaging power, radiologists began working closely with surgeons to tap into the technology’s potential. In 2008, Dr. Morris was part of a team at the Mayo Clinic that successfully performed an exceedingly complex surgical separation of conjoined twins. Pre-surgical 3D models played a central role in helping surgeons prepare for the separation of vital organs.

“The 3D model became the focal point of discussion for the surgeons when they got to planning the separation of the liver,” Dr. Morris recalled. “The surgeons liked that the model was the actual size and that it helped them understand the spatial relationships.”

A few years later, Dr. Rybicki and his team at Brigham and Women’s Hospital used 3D printing in another groundbreaking surgery: the first full face transplant in the U.S. Once again, 3D models were essential to the planning of a challenging and ultimately successful surgery.

“I immediately realized that 3D printing was going to be a game changer for radiology, and medicine as a whole. RSNA realized it too,” Dr. Rybicki said.

Weadock
Indeed, the RSNA annual meeting quickly became a barometer of the growing interest in the field. William Weadock, MD, a professor of radiology at the University of Michigan, started and managed a rapid expansion in didactic hands-on training courses at the meeting. This culminated at RSNA 2016 when several hundred square feet of prime real estate at McCormick Place’s Lakeside Center were given over to an extensive display of 3D printed models and printers.

“The displays were like something from the Smithsonian Institution,” Dr. Weadock recalled. “The response was overwhelming; we had to expand the space on the first day because there were so many visitors.”

Surgical planning is enhanced by models that allow surgeons to understand a patient’s anatomy before operating. For instance, models can show how a tumor might be encasing critical nerves that allow an arm or leg to function, and 3D printed cutting guides help take the guesswork out of a procedure. For patient-specific simulations, physicians can have two custom stents made based on a patient’s vascular anatomy and use one for a simulation. The additional planning can help reduce the significant expenses of operating room time.

“With 3D printing, you take things that are unknowns before you go into the operating room and make them known.” Dr. Morris said. “You decrease time in the operating room, decrease morbidity for the patient and realize huge cost savings and better patient outcomes.”

Education has also been significantly improved. Three-dimensional models help everyone on the team, from the scrub techs to medical trainees and all potential learners and can even show pathologists where a tissue sample originated. From the perspective of patient consent, 3D printing has dramatically helped patients to understand their diagnoses and potential interventions.

“The number of people one model can touch is truly remarkable,” Dr. Morris said. “This technology has really improved medical care at the Mayo Clinic.”

Once focused on non-medical domains, 3D printing is now becoming integrated into medical care, and newer materials that form the models are being developed to better emulate human tissues, said Dr. Rybicki. Implantable, patient-specific printed tissue will soon start to appear, and bioprinting — the printing of models with human cells — is on the horizon.

All of these possibilities start with imaging, and that is what brought dozens of radiologists together in March. Radiology leaders want to ensure that best practice is incorporated to protect patients during what Dr. Rybicki expects will be “a dramatic increase in 3D printing operations.”

In that spirit, the attendees approved the declaration to support the use of U.S. Food and Drug Administration-approved software to generate 3D models.

“This technology fits in exactly with what we do,” Dr. Weadock said. “We are a service organization, we deal with all different parts of a hospital and we’re built for the quality control of images.”

Editor’s Note: This is the first in a three-part series RSNA News is covering on the explosion in 3D printing in radiology. 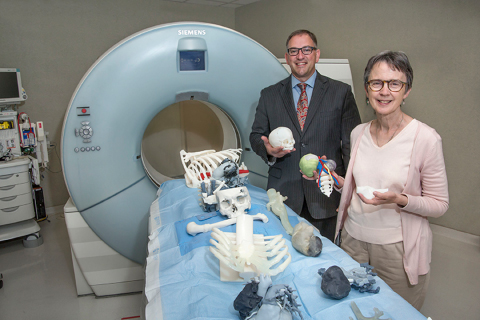 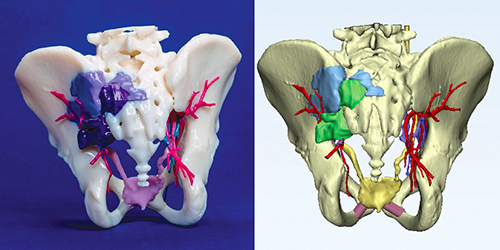