Resident and Fellow Committee Plans for 2017

Members of the RSNA Resident and Fellow Committee (RFC) recently met at RSNA headquarters in Oak Brook, IL, to plan for the year ahead. Committee Chair Courtney M. Tomblinson, MD, led discussions about the RSNA Career Connect tool and making social media connections for trainees. The group also finalized the Resident and Fellow Symposium that will be held on Tuesday, Nov. 28, during RSNA 2017 and agreed to host a VIP Meet and Greet at the Residents’ Lounge during lunch before the symposium.

Other resident and fellow activities being planned for RSNA 2017 include a Tweet-up in the Discovery Theater and the RSNA/ACR jointly sponsored reception on Monday afternoon.

The committee continues to share pertinent RSNA content and topics through regular communications sent to the Radiology Resident Representatives at over 100 radiology residency programs. The committee also collaborates with RadioGraphics staff making recommendations on enhancements for ease of use by trainees under the guidance of Jennifer Harvey, MD, chair of resident and fellow education on the RadioGraphics editorial board.

Members also represent the RSNA RFC on the American Board of Radiology (ABR) Initial Certification Advisory Committee, where they strive to improve the content and design of communications between the ABR and trainees. They identify and evaluate methods of contemporary communication including social networking and social media, investigate ways to increase interaction between the ABR and trainees, and assess the effectiveness of proposed modifications in communications. Using these metrics, representatives recommend modified approaches. 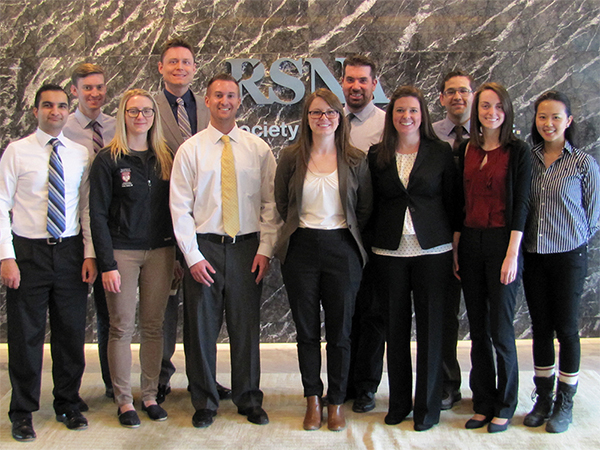