Tight Budget? Experience Chicago at Low — or No — Cost

“In countries like mine, working in a public hospital, we cover most of the expenses ourselves. There is no institutional budget for international training,” said Cesar Caldas, MD, attending physician in the Nuclear Medicine Department at Guillermo Almenara Hospital in Lima, Peru.

Similarly, travel expenses can overwhelm the budgets of residents and fellows.

RSNA polled its social media followers to learn how they save money on food, entertainment and transportation while attending the annual meeting. Thirty-two people responded to the poll, which included a ranking of their top expenses, excluding lodging and transportation to the meeting. Following are some of their ideas for getting the most for your money.

Dining, Entertainment on the Cheap

Eighty-two percent of respondents said that food is their top expense while in Chicago for the RSNA annual meeting.

The good news is that Chicago’s world-renowned restaurant scene has enough dining options to meet the needs of every pocketbook.

Thirty-eight percent of respondents saved money by choosing restaurants off the beaten path in Chicago’s diverse array of neighborhoods.

When exploring restaurants, it can pay to do some research before heading out.

“Restaurant prices can be high, so check out their menus online beforehand,” Dr. Ikuta recommended. “Sometimes you can find a bar or restaurant with a happy hour, which certainly makes it less expensive.”

Other respondents recommend searching discount sites like Groupon for deals at pricier establishments.

But for RSNA 2016 attendees with busy schedules, finding time to sit down at a restaurant may be difficult.

Grocery stores such as Jewel-Osco, Mariano’s or Trader Joe’s, or convenience stores like Walgreen’s or 7-Eleven can be a big money-saver. One poll respondent purchases fruit and cereal bars to bring along for snacks or lunch. Some stores have robust delis and even seating areas to enjoy an economical meal.

“As a resident and fellow, the complimentary food in the Resident and Fellow Lounge at the RSNA meeting has been great, and it’s a good way to meet other trainees from all over the country — and world,” Dr. Ikuta said.

Poll respondents ranked entertainment as their second largest cost, but as in dining, inexpensive options abound.

“‘The Bean’ is free and is always a fun photo opportunity,” said Dr. Ikuta, referring to the famous mirrored Cloud Gate sculpture in Millennium Park, nicknamed “The Bean.” The sculpture was named the favorite free attraction of 45 percent of poll respondents.

Several respondents said their favorite free activity is simply walking around downtown and enjoying the outstanding architecture. For the winter holidays, many stores along the Magnificent Mile have elaborate Christmas displays.

Interested in a guided tour? RSNA offers $35 guided walking tours. And if arranged online in advance, services like Chicago Greeters can provide free or low-cost walking tours, including free drop-in tours of the Loop and Millennium Park on Fridays, Saturdays and Sundays.

With many free and low-cost transportation options, travel within Chicago was the top budgetary concern for just nine percent of respondents.

“Chicago has excellent transportation systems to visit all areas of the city. At the RSNA annual meeting, there are free shuttle buses from your hotel to the event,” Dr. Caldas said.

Attendees also receive complimentary passes for the Metra train, which has stations at McCormick Place and around the city. Chicago’s other bus and train lines are also affordable.

Of course walking is free and a great way to see the sights. “Chicago is a very walkable city in reasonable weather,” wrote one respondent.

Ride-sharing services like Uber or Lyft may be cheaper than cabs. Reduce costs further by riding with other attendees. “If you travel with someone, you can split cabs,” Dr. Ikuta said. “And it’s a good way to network.”

Because cab transportation from the airport to the Loop, and vice-versa, can be expensive, one respondent recommends making the trip to O’Hare or Midway airports by either the Blue or Orange Line trains, respectively. Besides being inexpensive, “They are clean, safe and timely, regardless of the weather.”

Explore More Free Things to Do in Chicago

RSNA has teamed up with Hosts Chicago, a Hosts Global Alliance Member, and Bloomingdale’s, to offer exciting ways to experience Chicago during your stay for RSNA 2016. Registered RSNA 2016 attendees can sign up for tours, performances and more.

Attendees are invited to visit the Restaurant Reservations Desk in the Grand Concourse for restaurant recommendations, reservations and concierge services. 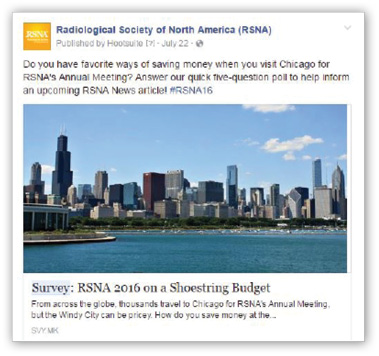 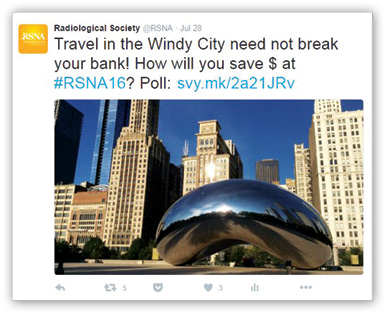