Not yet in widespread use, non-invasive virtual autopsies represent the future of forensic medicine

Unlike the traditional model, a virtual autopsy is a non-invasive approach that doesn’t harm the body or tamper with forensic evidence, according to Michael J. Thali, M.D., who presented at RSNA 2015. The method creates permanent 3-D models that can be easily accessed and the data quickly relayed via computer to aid in getting a second opinion, he said.

Dr. Thali, professor and chair of the Institute of Forensic Medicine at the University of Zurich in Switzerland, co-founded The Virtopsy Project in 1999. Since then virtual autopsies have become standard procedure for forensic investigations in Switzerland, and an emerging procedure around the globe.

Although the technique has been featured on episodes of “CSI: NY” and “CSI: Miami,” virtual autopsies have yet to reach wide use in the United States. Dr. Thali acknowledged that cost may be a factor, but added that the benefits outweigh the costs.

“It is a little bit expensive, but because you have this 3-D information you can always go back to it,” Dr. Thali said, explaining that traditional autopsies by nature change the integrity of the anatomy. He added that he expects the costs to decrease as technology improves and the practice gains popularity, much like the path DNA testing took toward more common usage.

The information produced by the individual modalities is then merged into a robotic system called Virtobot, which creates 3-D, high-resolution computer images to document an injury.

The Virtobot system is a robotic system that performs a variety of tasks in conjunction with the CT scanner. It allows for automated, high resolution 3-D surface documentation as well as CT-guided post-mortem tissue sampling.

In the case of a bite mark, for example, Dr. Thali said a 3-D morphological fingerprint of the mark on the body is created. That image can be compared to the dental records of the suspect, if available, to see if it matches.

Visualization is a key component in the value of virtual autopsies. As an example, Dr. Thali pointed to a domestic violence case in which the victim had been kicked by her husband, causing a torn pancreas. The 3-D recreation of the injury provided a better understanding for court officials during the trial.

“Our customer (the court system) often has no real knowledge of the body’s internal structures, so having 3-D visualization is a good tool to show what really happened to the body,” Dr. Thali said.

Another advantage of virtual autopsy over the conventional method is that it speeds the decision-making process because imaging can be done so quickly. Also, the process is observer-independent, allowing for objective data archiving, he said. Finally, virtual autopsies can be used in cultures and situations where conventional autopsy is not tolerated for religious reasons or is rejected by family members.

In the U.S., virtual autopsies are still not used as standard procedure, though they are being utilized by the U.S. military. Since 2006, the bodies of soldiers arriving at Dover Air Force Base in Dover, Del., undergo whole-body multi-slice CT as part of the postmortem examinations.

Virtopsy is also used at forensics institutes in Baltimore and Albuquerque, New Mexico, to gather forensic information that simplifies the process of death investigations.

Dr. Thali said he wants to see collaboration of the radiology and forensics fields, especially as technology improves and makes virtual autopsies even more beneficial.

“With virtual autopsy, imaging becomes the gold standard in the future examination of forensic evidence,” Dr. Thali said. “At the moment, we cannot see everything with imaging, but judging by the (technology) on display at RSNA 2015, I think the direction is absolutely clear.” 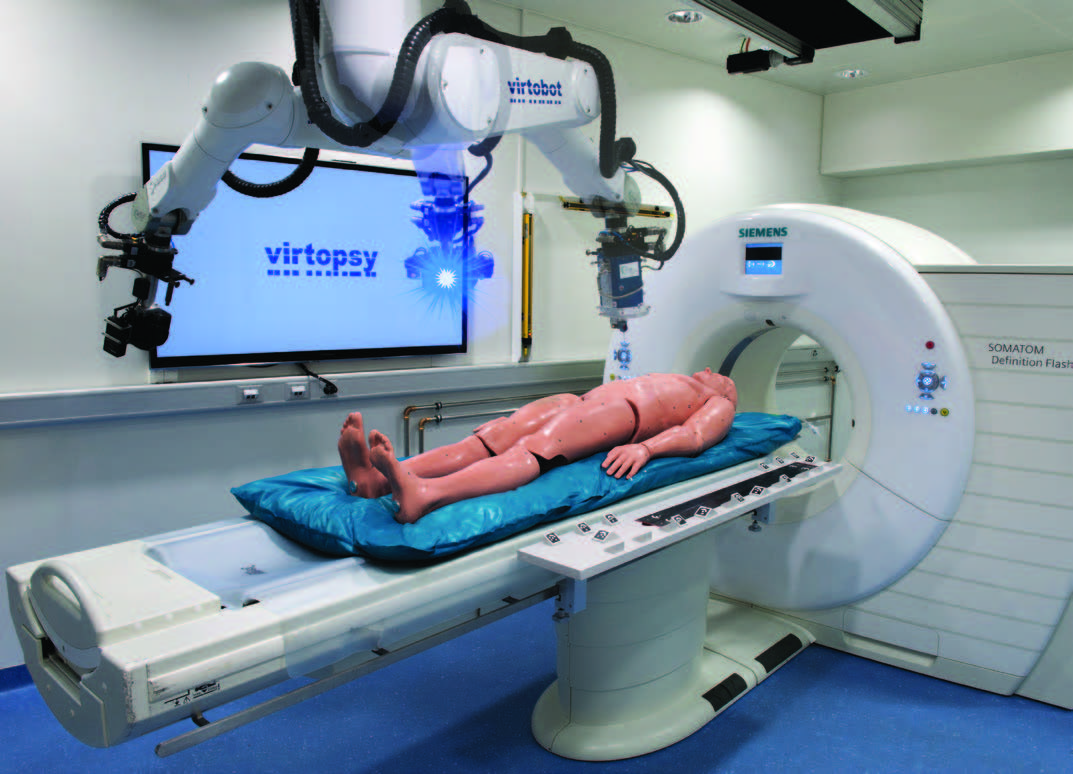 The Virtobot is a robotic system that performs a variety of tasks in conjunction with the CT scanner. It allows for automated, high-resolution 3-D surface documentation as well as CT-guided post-mortem tissue sampling.