Want to be a Successful Leader? Three of Radiology’s Prominent Leaders Tell You How 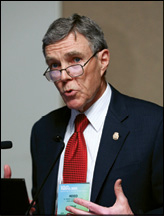 Successful leaders share a variety of traits including emotional intelligence, honesty, the ability to inspire confidence and an abundant optimism, according to a trio of radiology’s foremost leaders during an RSNA 2015 session.

The root characteristics of successful leaders, how these values build on each other, how to consistently demonstrate these core values and behaviors that can lead to failure were some of the topics discussed by Jonathan Lewin, M.D., senior vice-president for Integrated Healthcare Delivery at Johns Hopkins Medicine.

“Many of the most impactful opportunities are the informal leadership roles that we play in our organizations and these are available to everyone with dedication and a willingness to serve,” Dr. Lewin said.

Other critical traits include the ability to create and communicate a compelling vision, the ability to inspire confidence, unfailing respect for others and generosity of time and ideas, Dr. Lewin said.

James Brink, M.D., radiologist-in-chief at Massachusetts General Hospital and a professor of radiology at the Harvard Medical School in Boston, explained the pitfalls to avoid when dealing with confrontational issues and axioms to adopt to elevate respect in your organization.

Those tips include: Address others as you would like to be addressed; bring problems first to those responsible; look for the good in each other and relish it; do not put confrontational messages in writing; limit e-mail/text messages to the logistics of face-to-face meetings or phone calls (e-mail does not convey emotion, which can be confusing as many words have double meanings). And, “do not copy the world,” he added.

“Emotional intelligence with an emphasis on empathy, respect and selflessness are all necessary,” Dr. Brink said. Emotional intelligence, he said, is the ability to identify, monitor and discriminate among different human emotions and to use emotional information to guide thinking and behavior.

It’s time to change how our leaders are often selected, said presenter N. Reed Dunnick, M.D., professor and chairman of the Department of Radiology at the University of Michigan, in Ann Arbor.

“We do not prepare them for the next position and then we express surprise when they fail,” said Dr. Dunnick, 2014 RSNA President. “That must change, and programs such as the RSNA Academy of Radiology Leadership Management (ARLM) provide one way to participate in that change.”

Successful leaders put the organization ahead of themselves and possess a high degree of emotional intelligence.

“We don’t do it well,” he said. “Sometimes it is unclear, sometimes too late, sometimes it’s not done at all.”

A good leader must have an appreciation of culture when leading any organization, Dr. Dunnick said. Find good people and support them, he said. Create a clear vision and communicate it in a compelling way.

Attendees were left with some basic principles to take with them.

“Walk the talk,” Dr. Dunnick said. “But be consistent and reward positive contributors.”

“Look for ways to help each other,” Dr. Brink said. “Do not swing the imaginary sword in the corner until you’ve thought through the ramifications of your actions.”

Lastly, Dr. Brink added: “Trust is hard to come by and easy to lose. It can take a long time to overcome a negative reputation that develops because of a poorly thought out action.”