Joseph Delic, M.D., of the University of Pittsburgh Medical Center, and colleagues obtained FA maps and performed neurocognitive testing in 74 patients with mTBI. Mean FA and SE were correlated with clinical variables and were used to determine the areas under the receiver operating characteristic curve (AUCs) and likelihood ratios for mTBI and development of PTM.

SE analysis of whole-brain FA histograms demonstrated outstanding diagnostic performance for distinguishing patients who have suffered a true concussive injury from control subjects and was further able to help distinguish those patients with mTBI with PTM. Lower SE also correlated with increased recovery time in patients with mTBI.

Based on information theory, SE measures the complexity of a data set. The larger the amount of information or complexity contained in a data set, the more data points that are required to characterize the data set, and the higher the SE.

“Our study results suggest that SE analysis of FA histograms may better reflect the white matter pathologic conditions underlying mTBI and postconcussive symptoms and may have a role as a diagnostic tool and prognostic biomarker in individual patients with concussion,” the authors write.

Figure 1. Sample histograms for, A, a control subject and, B, a patient with mild traumatic brain injury. Despite the overall similar appearance of the curves, subjective differences in the complexity of the histogram shape are seen between the patient and the control subject. 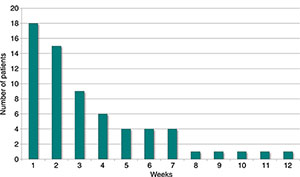 Figure 2. Histogram of the time to presentation for patients with mild traumatic brain injury (mTBI) shows that the majority of the patients (83 percent) presented within 2 months of injury. The remaining nine patients with mTBI presented more than 12 weeks after the initial injury. 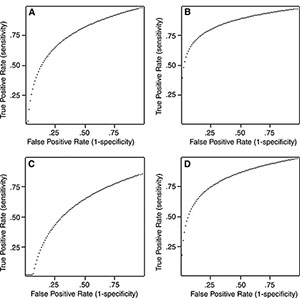