Simulation training is a promising method for teaching and assessing residents’ communication abilities, according to the presenter of an RSNA 2015 session.

“Simulation is a great way to teach and evaluate residents’ communications skills because prior studies have shown that training courses that allowed radiologists to practice delivering bad news not only improved performance, but also significantly altered attitudes and beliefs about importance of psychosocial issues and communication,” said Carolynn DeBenedectis, M.D., an assistant professor of radiology at the University of Massachusetts Medical School (UMass) in Worcester.

In March, Dr. DeBenedectis conducted simulation training at the interprofessional Center for Experiential Learning and Simulation (iCELS) at UMass to develop a curriculum to teach radiology residents communication aptitude through simulation.

The findings initially surprised Dr. DeBenedectis. She thought that first-year residents would have better communication skills given their recently completed internships which involve considerable patient contact and more opportunity to communicate with patients directly.

She explained that while conventional teaching with the “case conference” in radiology residency is a form of simulation, there are now more formalized and sophisticated simulation techniques available for education. These include computer-based techniques, the integration of 3-D imaging models, physical models, mannequin or cadaver models and hybrid simulation systems.

“The conventional philosophy of medical teaching was ‘see one, do one, teach one.’ However, our thinking has evolved with the availability of simulation tools,” Dr. Fayad said. “We can now give the trainee an opportunity to practice all aspects of a procedure, including the distracting aspects that are not directly related to the task at hand, such as interfacing with the nursing staff and equipment.” 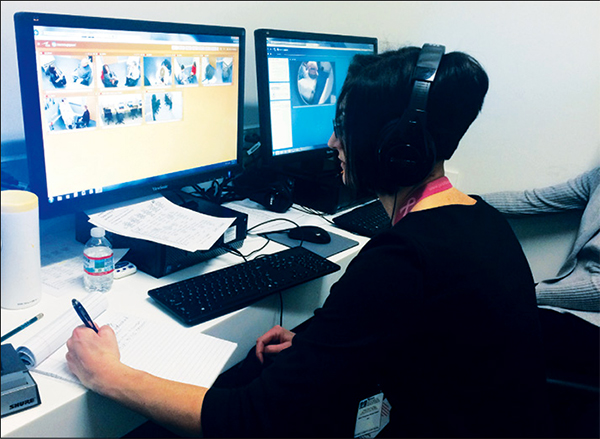 Carolynn DeBenedectis, M.D., watching and taking notes on the residents’ performance during the communication skills simulation at the University of Massachusetts.
Felicia Dechter is a Chicago-based freelance writer specializing in healthcare topics.
Editor's Picks