When used as a complement after regular screening, a new breast MRI technique is effective in ruling out cancer, research shows

A new breast MRI technique is highly effective at ruling out malignancy, and thus has the potential to reduce unnecessary biopsies and emotional distress, for breast cancer screening participants when used as a complement after regular screening, new research shows.

“If the preliminary findings are confirmed, this approach could have a high potential to be used as an adjunct in the clarification process of unclear lesions on X-ray mammography in breast cancer screening,” said author Sebastian Bickelhaupt, M.D., a radiologist at the German Cancer Research Center in Heidelberg. “This might help to reduce the number of invasive biopsies and alleviate the anxiety of breast cancer screening participants with unclear breast lesions found in mammograms.”

DWIBS-MRM adds background suppression to DWI, addressing some of DWI’s limitations while enabling volumetric 3-D image processing. First shown feasible in 2004, DWIBS is commonly used as an adjunct to regular MRI examinations for abdominal and prostate imaging, but less is known about its utility in breast imaging.

For the study published online in September 2015 in Radiology, researchers optimized DWIBS for breast imaging by adjusting the b-values—variables that affect the MR image contrast—and using fat suppression to improve image quality.

“Further, we developed and implemented a quality-assurance system with periodic quality testing in order to assure a high, comparable and standardized quality of our images,” Dr. Bickelhaupt said.

Researchers compared DWIBS-MRM to an abbreviated contrast-enhanced MRI and a full diagnostic breast MRI protocol in 50 women ranging in age from 50 to 69 years who had suspicious screening mammograms and indication for biopsy from September 2014 to January 2015.

Twenty-four of the 50 participants had a breast carcinoma. Comparing the different approaches, researchers determined that DWIBS-MRM showed comparable accuracy to that of the full diagnostic and the abbreviated contrast-enhanced MRI protocols. In addition, DWIBS-MRM yielded a negative predictive value of 92 percent.

Among its advantages over other MRI approaches, DWIBS-MRM results can be obtained in less than seven minutes, compared with more than 30 minutes for a full breast MRI exam, while mean reading time using unenhanced DWIBS-MRM is less than 30 seconds. The faster times would make it easier to integrate the protocol into a high-volume screening environment.

“We also took care that the time demand on the radiologist is as short as possible to allow for the case load expected within the screening setting,” Dr. Bickelhaupt said.

Researchers developed a standardized quality assurance program for DWIBS-MRM implementation that could be incorporated into existing programs like the Mammography Quality Standards Act (MQSA) program in the U.S.

Potential Exists for Wider Use

DWIBS-MRM has the potential for widespread use, especially if study results can be reproduced at different centers, said Savannah Partridge, Ph.D., a research associate professor in breast imaging at the University of Washington in Seattle who has investigated the role of DWI in differentiating high-risk breast lesions requiring additional workup from other non-malignant subtypes.

“The results of this study are promising for reducing false positives and unnecessary biopsies in breast cancer screening,” Dr. Partridge said. “Breast diffusion MRI approaches and image quality vary widely across centers, and advantages of the vendor-specific DWIBS technique for breast tumor characterization over more conventional diffusion MRI techniques were not tested in this study, warranting further investigation.”

Dr. Bickelhaupt says DWIBS-MRM is not intended as a standalone screening modality, but as an adjunct to X-ray mammography and tomosynthesis. “While the results so far are promising, the degree of evidence is currently not sufficient to recommend the method be implemented into screening in a general setting,” Dr. Bickelhaupt said.

Researchers also plan to extend their DWIBS-MRM research to women with dense breasts and women who are undergoing diagnostic X-ray mammograms with unclear findings. 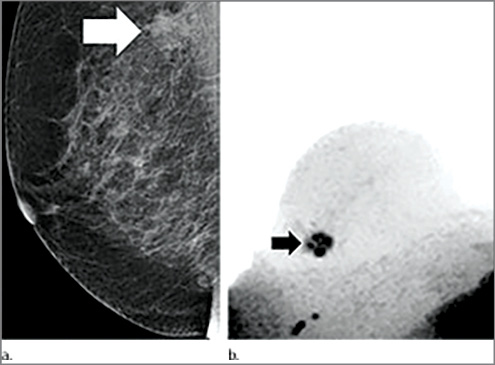