Unenhanced diagnostic MRI-diffusion-weighted imaging with background suppression (DWIBS) mammography can help exclude malignancy in women with suspicious X-ray screening mammograms without the use of ionizing radiation or a contrast agent, according to a new study published online in the journal, Radiology). The method has the potential to reduce unnecessary biopsies—as well as emotional distress—for breast cancer screening patients if used as a complement after the regular screening clarification procedure.

Sebastian Bickelhaupt, M.D., of the German Cancer Research Center, Heidelberg, Germany, and colleagues conducted a prospective institutional review that included 50 women (mean age, 57.1 years; range, 50-69 years), who gave informed consent and who had suspicious screening mammograms and an indication for biopsy from September 2014 to January 2015. Before biopsy, full diagnostic contrast-enhanced MR imaging was performed that included DWIBS (b = 1500 sec/mm2). Two abbreviated protocols (APs) based on maximum intensity projections (MIPs) were evaluated regarding the potential to exclude malignancy: DWIBS (AP1) and subtraction images from the first post-contrast and the unenhanced series (AP2). Diagnostic indexes of both methods were examined using the McNemar test and were compared with those of the full diagnostic protocol and histopathologic findings.

Unenhanced diagnostic MR imaging–DWIBS mammography achieved a comparable accuracy to the full diagnostic protocol and to abbreviated contrast-enhanced protocols when used as a complementary method after screening mammography, according to researchers.

“The comprehensive method is fast and robust to perform as a complement to routine mammography. Along with lack of need for intravenous contrast agent administration, ad-vantages include its short acquisition time of less than seven minutes and short reading time of less than 30 seconds,” the authors write. 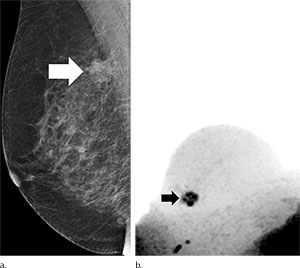 Figure 3. Images show example of a screening-detected lesion in a 51-year-old breast cancer screening participant who was examined with breast MR imaging protocols that revealed a second lesion on the diffusion-weighted imaging with background suppression maximum intensity projection.