Radiology can play an integral role in diagnosing mild traumatic brain injury (mTBI) and predicting outcomes for patients who have suffered concussions, according to studies presented at RSNA 2014.

For concussion victims, imaging is largely used as a tool to exclude more serious injuries. “But in reality, injuries occur in a continuum of severity, with subtle diagnostic differences that imaging might be able to detect," said Lea M. Alhilali, M.D., assistant professor of radiology at the University of Pittsburgh Medical Center. “Ideally, I’d like to see radiology used not only as a diagnostic tool in the evaluation of concussions, but also as a prognostic tool.”

Dr. Alhilali was lead author on a retrospective study that identified a central axonal injury component in patients with mTBI and vestibulopathy, who were imaged with diffusion-tensor imaging (DTI). The findings suggest a role for DTI in mTBI diagnosis, with a quantitative biomarker to aid in that diagnosis. The results were published in the July 2014 issue of Radiology.

Previously no specific brain regions had been linked to the prognosis of patients with vestibulopathy. “Clinical tests rely on patient cooperation and can very easily be undermined. There has not been a lot of success accurately predicting outcomes in these patients,” Dr. Alhilali said.

Physicians currently view all patients with concussions as a whole, Dr. Alhilali said, and don’t consider differences that could occur between them as individuals. Focusing on the differences between patients could lead to more accurately prescribed treatments.

“For instance, our results show that you can detect specific injuries in patients with specific symptoms, indicating that perhaps an objective, measureable injury can be quantified that will improve the diagnosis,” Dr. Alhilali added.

“The more we tease out what’s different, the more we will find out about the actual pathophysiology and the better we will be able to treat individual patients,” she said.

Increased cerebrovascular reactivity (CVR) in college athletes following a sports-related concussion may be related to recurring headache symptoms and could be an indicator of acute injury, according to a separate study presented at RSNA 2014 by Adam R. Militana, M.D., and colleagues.

“We hope that the ability to image pathophysiology following concussion will one day inform clinical decision making,” said Dr. Militana, a third-year resident at Vanderbilt University School of Medicine.

Researchers studied four male and three female athletes (ages 18-22) three to six days following sports-related concussions diagnosed by a sports medicine physician. They had no history of prior concussion and only one noted a prior migraine condition.

Using functional MRI with a hypercarbia challenge—increased levels of carbon dioxide closely simulate the physiologic challenge that an athlete will encounter during physical activity—researchers found CVR increased approximately 33 percent across all regions of interest in the concussed athletes, compared with control patients. CVR increase was associated with more recent injury and in one region was also associated with increased headache symptoms.

“Some regions were more elevated than others, but all were increased much more than the controls,” Dr. Militana said. “This is unusual in CVR work.”

Increased CVR may be an objective measure that could be a future role for imaging in assessing return-to-play symptoms after concussion, Dr. Militana said.

“The relationship between symptoms and CVR is an area to explore as we design studies to investigage the physiological mechanism behind concussion symptoms at rest and during physical exertion,” added lead investigator Victoria L. Morgan, Ph.D., associate professor of radiology at the Vanderbilt University Institute of Imaging Science.

The research could ultimately affect patients in two ways, including assessment of the small percentage of patients who have persistent concussion symptoms well beyond impact, Dr. Morgan said.

“Moreover, if longitudinal studies can determine the typical time frame at which CVR can be expected to return to normal levels and whether this correlates with resolution of symptoms, then we will know whether symptom resolution is an accurate indicator of brain recovery,” Dr. Morgan added. 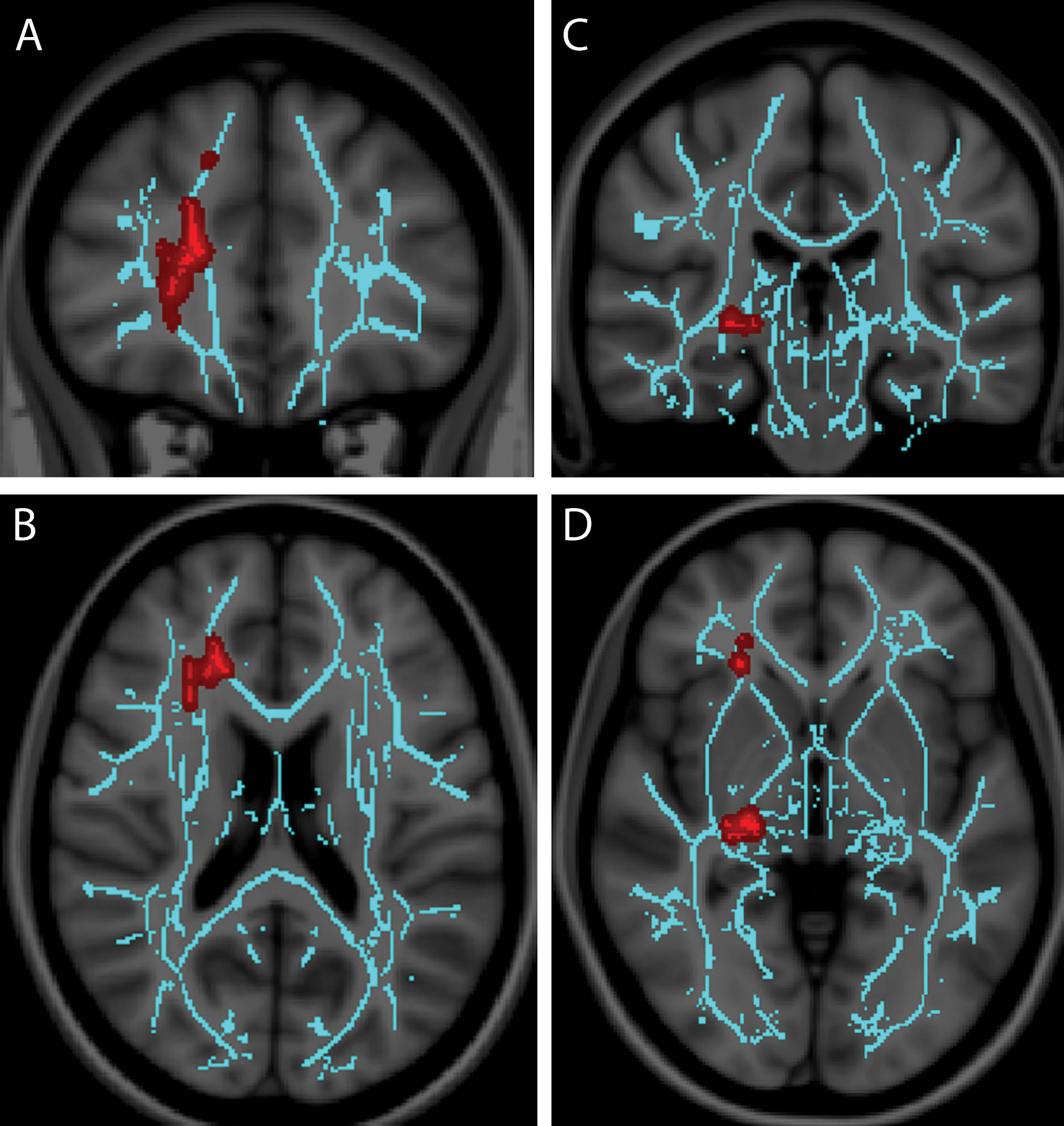 Recent research in Radiology suggests a role for diffusion tensor imaging (DTI) in mild traumatic brain injury (mTBI) diagnosis, with a quantitative biomarker to aid in that diagnosis. Left: Convergence insufficiency correlates with increased FA in right anterior thalamic radiation, which is central to processing speed, and right geniculate nucleus optic radiations, the major relay station for the accommodation circuit central to oculomotor convergence. Asymmetric involvement of the right is not unexpected, as the corresponding left visual field is dominant for spatial processing as compared with the right visual field, which is dominant for nonspatial and/or temporal processing. Images derived from TBSS results and rendered on T1-weighted images from Montreal Neurologic Institute atlas show that significant white matter differences in patients with mild TBI and convergence insufficiency involve right anterior thalamic radiation, as shown in (a) coronal and (b) axial planes, and right geniculate nucleus optic radiations; as shown in (c) coronal and (d) axial planes. Significant voxels (P<.05, corrected for multiple comparisons) were thickened by using TBSS fill function into local tracts (red) and overlaid on white matter skeleton (blue). (Radiology 2014; 272;1;224-232) ©RSNA 2014 All rights reserved. Printed with permission. 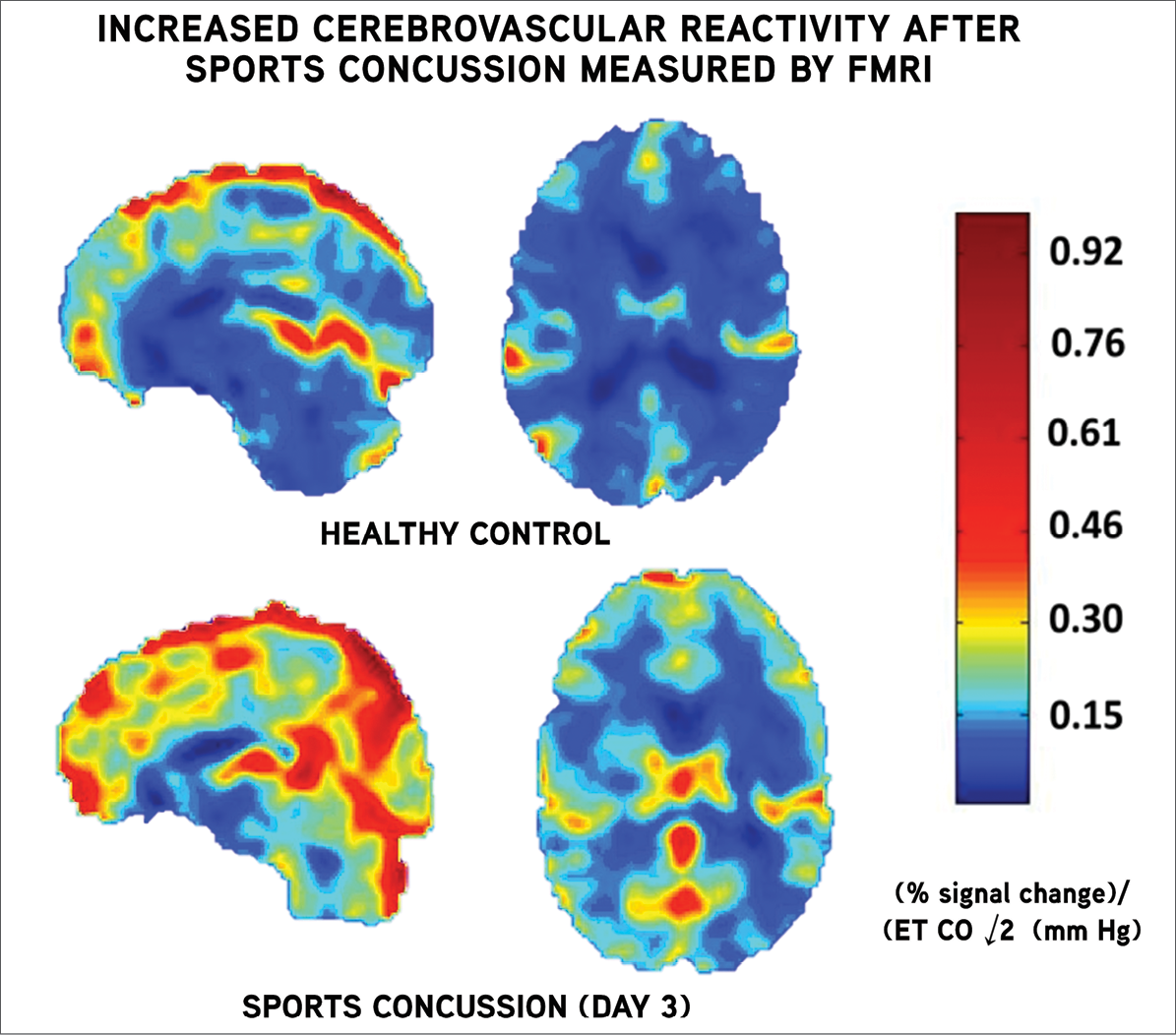