A new CT dose metric, the size-specific dose estimate (SSDE), is moving toward becoming an international standard. Developed by a task group of the American Association of Physicists in Medicine (AAPM), SSDE offers a better estimate of patient dose and may serve as an improved dose management tool.

In January 2015, the International Electrotechnical Commission (IEC) convened a 20-member team to develop a universal method of calculating SSDE. Members from the Medical Imaging and Technology Alliance (MITA), liaisons from the U.S. Food and Drug Administration (FDA) and medical physicists in clinical practice are working on developing uniform methodologies for calculating SSDE and determining how SSDE data should be displayed and recorded.

Although they are voluntary, standards set by the IEC—an organization that develops standards for safety and performance of electrical devices throughout the world—are often incorporated into the standards of the American National Standards Institute (ANSI) and the National Electrical Manufacturers Association (NEMA), as well as FDA regulations and regulations of other countries.

SSDE adds a new metric with a new value to current dosimetry metrics—CT dose index (CTDIvol) and dose length product (DLP)—which essentially measure radiation output rather than individual patient exposure. CTDIvol and DLP were defined by the IEC and recognized by the FDA in the 1980s.

“A parent who takes a child to the hospital for a CT scan today and asks what radiation dose the child received is unable to get that information from the equipment,” said Marilyn J. Goske, M.D., professor of radiology and pediatrics at the University of Cincinnati School of Medicine and co-chair of the Alliance for Radiation Safety in Pediatric Imaging/Image Gently. “Radiation output of equipment was not intended for use for a specific patient. But in the radiologist’s report, there’s a dose report page that lists CTDIvol and DLP. That’s confusing.”

“Radiologists are used to seeing CTDIvol and DLP numbers, but may forget that they aren’t patient-specific—they reflect how the machine is being operated,” added Cynthia H. McCollough, Ph.D., director of the CT Clinical Innovation Center and X-ray Imaging Core at the Mayo Clinic in Rochester, Minn.

In addition, interpreting the displayed CTDIvol or DLP as the estimated patient dose can lead to overestimating or underestimating dose levels because of discrepancies in body size versus that of the calibration phantom.

“CTDIvol underestimates the radiation dose being given to small children and smaller adults,” said Keith J. Strauss, M.Sc., a clinical imaging physicist at Cincinnati Children’s Hospital Medical Center. “It gives clinicians a false sense of security. When you look at CTDI, it may look like quite a low dose, but the actual dose may be double for kids.”

In response to organizations concerned with imaging pediatric patients, the American Association of Physicists in Medicine (AAPM) formed a task force dedicated to developing a better CT dose metric.

“The Alliance for Radiation Safety in Pediatric Imaging/Image Gently got the ball rolling in 2008 when they held a summit and asked vendors and stakeholders to help create a better dose index,” Strauss said.

In 2011, the AAPM task group—which included Dr. McCollough and Strauss, as well as Dr. Goske as a consultant—published an AAPM Report 204 that included conversion factors to translate CTDIvol to SSDE in accordance with patient size. Recently, another AAPM working group, chaired by Dr. McCollough, published AAPM Report 220, which describes how to best measure patient “size.”

“SSDE has been quickly and broadly embraced, which really shows that it was a concept whose time had come,” Dr. McCollough said.

“SSDE is much more accurate at estimating dose for patients of all sizes,” added Strauss.

Once the IEC working group reaches an international consensus on methods for calculating SSDE—a process that could take up to four years—the standard could then be incorporated into equipment design and clinical practice.

“I expect that the user community and stakeholders will push to have manufacturers implement [the SSDE standard] as soon as possible,” said project team leader John W. Jaeckle, chief regulatory affairs strategist at GE Healthcare.

Developing the international standard is a huge endeavor and a step in the right direction, according to Dr. Goske.

“Size-specific dose estimate will give radiologists, technologists, referring physicians, parents and patients relevant radiation dosage based on the patient’s size,” she said.

In addition to improving the monitoring and reporting of patient dose, SSDE will also help radiologists address issues of optimal image quality.

“For instance, two CT scans of the abdomen could each have a CTDIvol of 20 mGy, but one patient may be tiny and the other very large in size,” Dr. McCollough said. “You might not be concerned about this because a CTDIvol of 20 mGy is reasonable for CTs of the abdomen. However, for the smaller patient, the CT images would be incredibly sharp because too much dose would have been used; but for the very large patient, images would be difficult to interpret because not enough radiation was used. SSDE addresses that problem by providing a dose value that takes into account patient size.”

As a dose management tool, SSDE will also facilitate more meaningful dose comparisons and notification values for the NEMA/MITA Smart Dose standard, that helps ensure patients are imaged using optimal radiation dose and that the dose is being tracked and reported in a standardized manner. Beginning January 1, 2016, healthcare providers will be required to ensure that their CT scanners comply with this standard.

“The formula will be worked out and standardized for all variations, which means we will be able to compare apples to apples and collect and analyze data and identify outliers,” Dr. McCollough said. “SSDE is a solid data point people can trust.”

While the SSDE international standard is in development, radiology practices can obtain SSDE calculations for diagnostic CT exams by participating in a dose registry. For example, the American College of Radiology Dose Index Registry automatically calculates SSDE from an institution’s dose data, allowing for comparisons to other institutions. 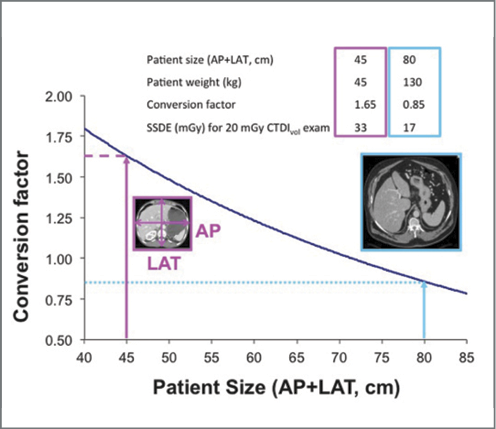 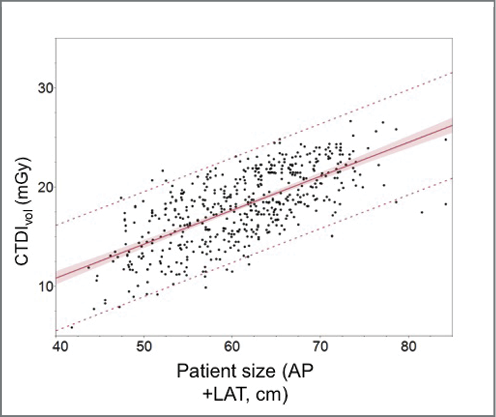 From left: in 545 adult patients undergoing abdominal CT, the scanner output (CTDIvol) increased proportional to the sum of the anterioposterior (AP) and lateral (LAT) dimensions, measured in the center of the scan range. 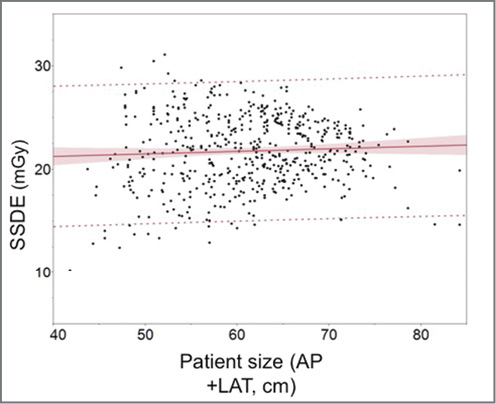 After conversion to patient dose (SSDE), there is no statistically significant relationship between patient size and dose, demonstrating that the use of higher scanner output values (CTDIvol) in larger patients (to obtain adequate image quality) does not necessarily translate to increased patient dose in larger patients. Images courtesy of Cynthia H. McCollough, Ph.D.

Mary Henderson is a writer based in Bloomington, Ind., specializing in health and medicine.
Editor's Picks