Conquering Childrens’ Fear of MRI with the Help of Superheroes

A Denver teenager with a form of autism was daunted by the MRI scans he regularly needed. So just before Christmas in 2014, his mother phoned Robert J. Min, M.D., chairman of radiology at Weill Cornell Medical College, N.Y., to tell him that her son was excited to hear about a new program that could help battle his fear: Marvel: The MRI Heroes Kit.

“She contacted me and said that all her son wanted for Christmas was an MRI Heroes Kit and that if he received one, he was sure that he could do his scans without sedation,” said Dr. Min, also radiologist-in-chief at NewYork-Presbyterian Hospital and president of Weill Cornell Imaging at NewYork-Presbyterian.

Dr. Min knows first-hand that having an MRI can be a scary experience for anyone, but especially for a child who may be getting his or her first scan. The machine’s loud clanging noise, the confining space and the amount of time sometimes needed to complete the scan can terrify patients, especially children, to the point of requiring sedation.

So at RSNA 2013, Dr. Min approached a Siemens Healthcare representative and shared some of his thoughts about putting together an educational program to help combat children’s fear of MRI scans.

Distributed by Siemens to radiology departments, the MRI Heroes Kit aims to change the way kids—and their parents—feel about the scans by educating them in a fun, non-intimidating way. And easing their fears translates to the highest-quality scans possible.

The departments receive the following: 100 copies of an educational comic book, 100 superhero-themed capes, 100 Captain America and Iron Man plush toys, a mini-model of a Siemens MRI scanner and an educational DVD. Each child gets a comic book, a stuffed Captain America or Iron Man, and a superhero cape after their scan. They can also play with the model MRI scanner and are encouraged to watch the six-minute educational video, which—through the eyes of a 10-year-old girl recounting her MRI exam experience—details what children and parents should expect during their visit.

“We encourage parents to sit and watch the video with their kids before the scan,” Dr. Min said. “By helping children understand what an MRI is, including what it looks like, what it sounds like, and what it does, I am convinced we can make a difference.”

Often it isn’t nerves about the MRI, but the fear of undergoing sedation that causes parents to withhold a test their child may need, or to go through it filled with anxiety, Dr. Min said.

“The MRI Heroes Kit helps reduce the anxiety of children and their parents, and may offset the need for sedation in many instances," Dr. Min aid. "Safety and efficiency go up while costs come down."

By reviewing the previous year’s MRI scans performed on 4- to 12-year-olds with sedation, Dr. Min was able to quantify the potential impact of the program and determine where to direct the initial educational efforts.

“I was surprised to discover how many MRIs are currently performed with sedation,” Dr. Min said. “If even 50 percent of last year’s MRI scans can be accomplished without sedation, that is obviously a huge benefit to patients first and foremost, and a huge benefit to healthcare in general, because we are improving safety while driving down costs significantly.”

“Parents are surprised by how simple and powerful the kit really is,” Tait said. “With it, they now know what to expect for their children. It’s been really well received. We’re very proud of it.”

Siemens Healthcare worked hand-in-hand with Marvel to make the comic book as fashionable and true to Marvel as possible, Tait said. In the comic book, Captain America’s nagging shoulder pain following a heated battle prompts Iron Man to urge his reluctant, anxiety-filled partner to obtain an MRI scan, sending the message that if Captain America can lie still during an MRI exam, so can anyone else—and that it’s OK to be nervous or scared.

“We see the patients as the true superheroes, and believe they deserve a superhero cape and toy to take home after their MR exam, as well as a special comic book developed just for them,” Tait said. “We couldn’t be happier with the end result.”

“Adults can benefit from getting educated on what to expect from an MRI exam too,” Dr. Min said. “Helping to improve the pediatric patient experience can improve not just the ability to care for these patients, but also their families’ satisfaction with the organization as a whole.” 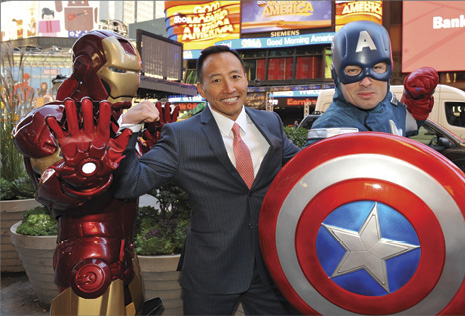 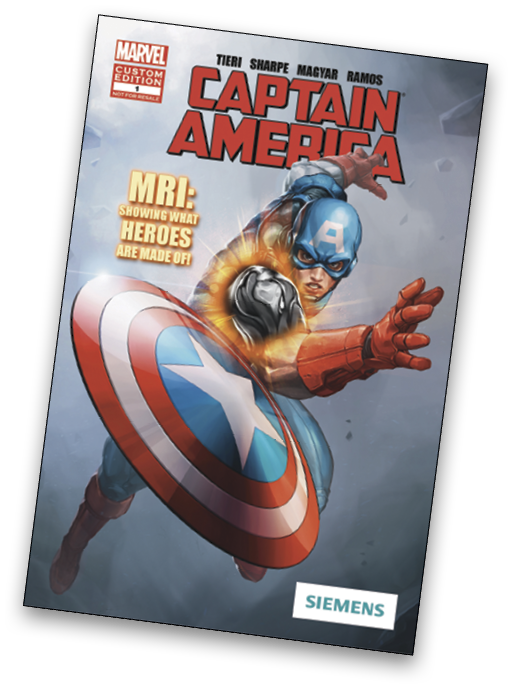 Part of the MRI Heroes Kit, the comic book explains in simple language what an MRI is and how it works. Image courtesy of Siemens Healthcare.

After Captain America injures his arm in battle, Iron Man urges him to go to the hospital for an MRI, where the nurse assures him, "Getting an MRI is no big deal." 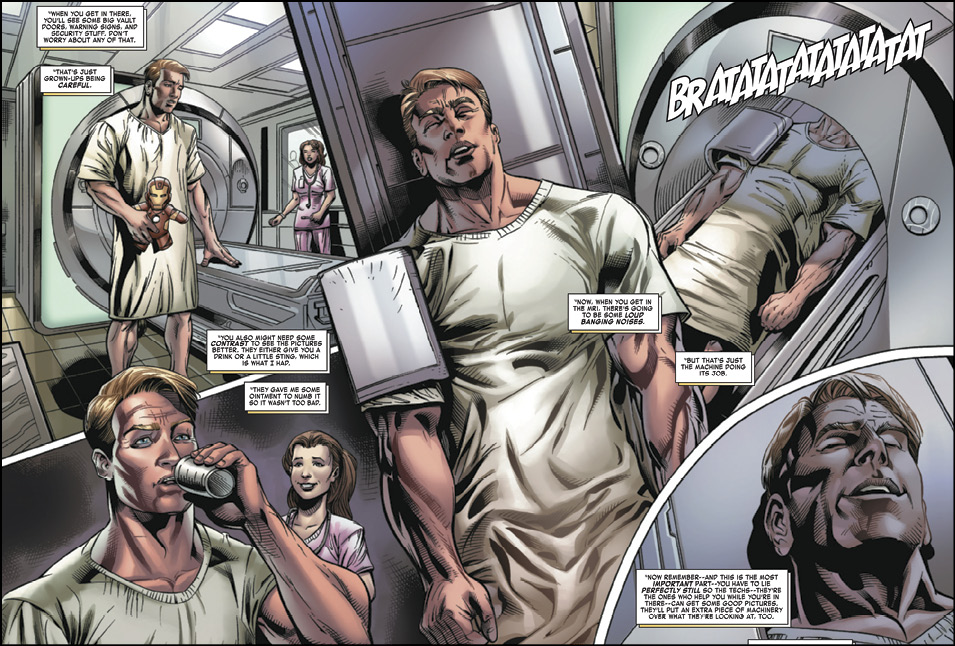 Because he can't carry his metal shield into the MRI exam room, Captain America is given an Iron Man plush toy to hold during the exam. Parents can read the comic to their kids and answer questions, while kids can take the comic book into the MRI waiting room. Images courtesy of Siemens Healthcare.