3-T MR imaging detects a high prevalence of cerebellar hemorrhages (CbH) in preterm infants—a finding that could carry long-range implications regarding cognitive and motor function, according to research presented at RSNA 2014.

In addition, a standardized scoring system can be applied to assist in grading of overall brain injury and prediction of neurodevelopmental outcomes, said Mai-Lan Ho, M.D., clinical instructor/chief fellow in neuroradiology and soon-to-be assistant professor of pediatric neuroradiology at the University of California, San Francisco (UCSF). “It’s very exciting because 25 years ago, people thought that the cerebellum only modulated motor coordination and balance,” said Dr. Ho, who was the 2012 RSNA William W. Olmsted Editorial Fellow and received a 2012 Roentgen Resident/Fellow Research Award from the RSNA Research & Education (R&E) Foundation and the 2012 Bracco Diagnostics/RSNA Research Resident Grant.

Detection of CbH in preterm infants has steadily increased with the introduction of new imaging modalities, said the study’s senior author, A. James Barkovich, M.D., professor in residence and chief of pediatric neuroradiology at UCSF. CbH was thought to occur in about 10 percent of preterm infants when 1.5-T MRI was used; however, the proportion jumped to more than 20 percent when 3-T MRI was used, and surpassed 30 percent with the use of susceptibility-weighted imaging at 3T.

The study is ongoing, but in their most recent analysis, the researchers identified 22 of 59 (37 percent) infants with CbH, a proportion approaching the reported prevalence of cognitive impairment in the preterm birth population.

“When you start getting into 35 or 40 percent [with CbH], and you realize 50 percent [of preterm infants] have developmental problems, this is a significant finding,” said Dr. Barkovich, the 2012 RSNA Outstanding Researcher. “Maybe this is why we haven’t been able to get the neurodevelopmental levels up to normal in 90 or 95 percent like we have with motor function.”

Based on Fisher’s exact test, the researchers’ cohort showed that CbH is statistically associated with intraventricular hemorrhage (IVH), but not with white matter injury (WMI) or ventriculomegaly (VM). Furthermore, they found that at 1 year of age, CbH is associated with cognitive and motor subscores on the Bayley-III Scales of Infant and Toddler Development.

“A big question has been, ‘Can we use imaging to evaluate preterm risk factors associated with neurodevelopmental outcomes?’” Dr. Ho said. “If so, could we identify these patients early and institute earlier preventive or therapeutic measures? It’s an exciting concept.”

The high volume of admissions to the neonatal intensive care unit (NICU) at UCSF make it one of the few centers worldwide able to investigate CbH in great detail. The group is among the first to focus on cerebellar in addition to cerebral injury.

“The human cerebellum represents 10 percent of intracranial volume, but contains 80 percent of total neurons in the brain,” Dr. Ho said. “Fascinatingly, the ratio of neurons between the cerebellum and cerebrum has been relatively preserved throughout evolution, which really does make a case for the cerebellum being a higher order executive center.” 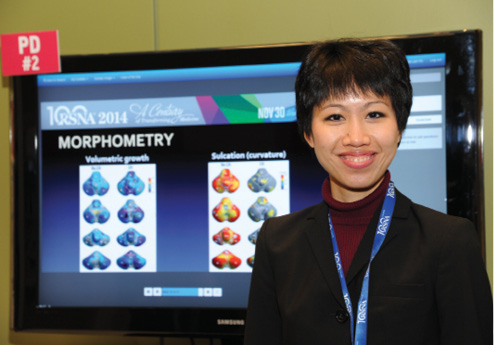