Radiologists realized salary increases for the second consecutive year, according to the American Medical Group Association (AMGA). The 2015 Medical Group Compensation and Productivity Survey ranks radiology among the most highly compensated specialties.

“It’s always good to see that compensation is going up,” said David Yousem, M.D., M.B.A., a professor in the Department of Radiology, vice-chair of program development and director of neuroradiology at Johns Hopkins Hospital in Baltimore, and a nationally recognized expert in radiology economics. “We are working harder, but we continue to get maximum efficiency."

A look at the radiology compensation numbers—and productivity numbers as represented by work RVUs (relative value units)—over a longer period of time suggests that while radiologists are earning more money, they are also working more efficiently.

He pointed out that it’s not unusual to find “anomalies” in a compensation survey, particularly when it comes to high-income specialties where large practices might report their data one year and fail to do so the next.

“We always suggest that people blend data from a longer length of time rather than looking at one-year periods,” Dobosenski said.

One explanation for this may be that payer mixes are changing, according to Dr. Yousem.

“For example, in Baltimore many private practices contract with insurers at rates that are less than what Medicare pays, while hospitals like the University of Maryland Medical Center and Johns Hopkins contract at higher than Medicare rates,” he said. “This may suggest that more procedures are being performed at facilities that charge more to the payers than Medicare rates.”

Radiology Among Most Highly Compensated Specialties

“I would have expected to see primary care go up at a faster pace than it did over the past several years, particularly with the shift to preventive medicine and value-based compensation structures,” Dobosenski said.

“When you look at radiology, these numbers sort of map where the market is going for a lot of specialties,” Dobosenski added. “There are specialties that have seen larger increases in compensation over the last few years, such as cardiology, but a lot of medical and surgical specialties have been relatively flat this year.”

As for the future, both experts say they believe there really isn’t much room for more efficiency in radiology practices. “With PACS and RIS and voice recognition we are pretty much maxed out,” Dr. Yousem said. “I don’t know how we are going to get more efficient in reading more cases per unit time. So I don’t expect to see RVUs increase that much from the standpoint of work efficiency.”

Watch RSNA News for a report on RSNA 2015 sessions covering issues including the CMS 2017 mandate for clinical decision support and trends in radiologists' reimbursement including the role of relative value units (RVUs). 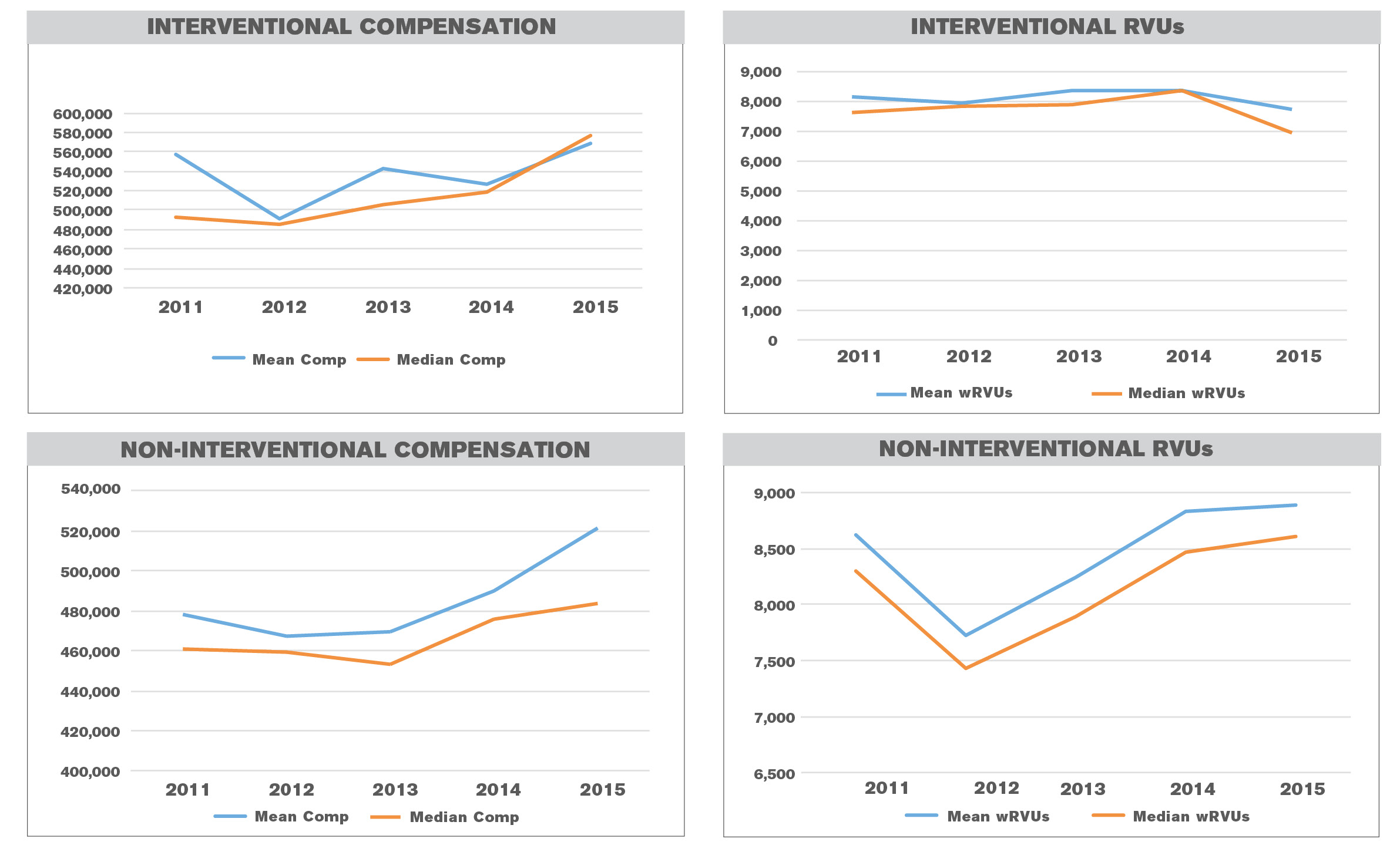 Radiologists' salaries increased across the board in 2014. The American Medical Group Association (AMGA) survey shows that the median compensation levels for non-interventional radiologists increased by 1.6 percent, from $476,013 in 2013 to $483,660 in 2014, while compensation for interventional radiologists jumped 11.4 percent in the same time period. In terms of productivity represented by RVUs (relative value units), the survey shows that radiologists are earning more money, but are also working more efficiently. Charts courtesy of the American Medical Group Association (AMGA).
Mike Bassett is a writer based in Holliston, Mass., specializing in health and medicine.
Editor's Picks