Radiology Should Take Lead in MRI Contrast Media Use, Research

Recent research has determined that a component of some MRI contrast agents remains in the brains of people who undergo repeat examinations, raising new concerns about the safety of these widely used agents. Although no harmful effects have yet been shown, radiology experts said the findings highlight the need for more research and a more prominent role for radiologists regarding the use of MRI contrast media.

Gadolinium-based contrast agents (GBCAs)—first approved by the U.S. Food and Drug Administration (FDA) for use in MRI in 1988—are widely used for brain imaging. The gadolinium ion is toxic to humans, so it is attached to a ligand, a kind of molecular escort that carries the agent into the bloodstream and out of the body through the urinary system without leaving any of the toxic ion behind. However, concern that gadolinium may become dissociated from the ligand in certain agents began to grow in 2006, when reports first surfaced of patients contracting nephrogenic systemic fibrosis (NSF), a disease of the skin and internal organs, after GBCA administration.

“As we acquired more knowledge about NSF, we found that some contrast agents have a higher risk of dissociation of gadolinium from its protective ligand molecule,” said Emanuel Kanal, M.D., a radiology professor at the University of Pittsburgh Medical Center (UPMC) and chairman of the American College of Radiology MR Safety Committee from 2002-2012, in an interview with RSNA News. “The gadolinium stuck around longer than normal in patients with kidney impairment, increasing the risk of dissociation of the gadolinium ion from its ligand molecule while it was still within the patient.”

Along with Michael F. Tweedle, Ph.D., Dr. Kanal co-authored the editorial, “Residual or Retained Gadolinium: Practical Implications for Radiologists and Our Patients,” in the June 2015 issue of Radiology.

In recent years, new research of MRI studies of patients with a history of multiple GBCA administrations detected hyperintensity indicative of gadolinium in two brain regions: the dentate nucleus and the globus pallidus. The research team led by Tomonori Kanda, M.D., Ph.D., of the Teikyo University School of Medicine in Tokyo, followed up their initial findings with research published in the June 2015 issue of Radiology.

Researchers used mass spectroscopy to compare brain tissues obtained at autopsy in five subjects who received GBCA with five subjects who had no history of GBCA administration. Gadolinium was detected in all brain specimens from the GBCA group, with significantly higher concentrations in the dentate nucleus and globus pallidus. The non-contrast group had no detectable levels of gadolinium in those areas.

In a separate June 2015 Radiology study, researchers from the Mayo Clinic in Rochester, Minn., led by Robert J. McDonald, M.D., Ph.D., used mass spectroscopy and electron microscopy (EM) to compare brain samples from 13 patients who underwent at least four GBCA-enhanced brain MR examinations between 2000 and 2014 with those of 10 patients who did not receive GBCA. The brain tissue of patients from the contrast group contained up to 58.8 micrograms gadolinium per gram of tissue, while no gadolinium was detected in the control patients. The dentate nucleus contained the highest median concentration of elemental gadolinium. Using EM, gadolinium deposits were detected within the neuronal interstitium of the dentate nucleus, suggesting that gadolinium is somehow able to cross the blood brain barrier.

While neither of these studies was able to identify whether the residual gadolinium was in free or chelated form, these results are especially concerning because the abnormalities were found in patients with normally functioning kidneys.

“NSF is a severe condition, but it applies to only a very small section of the population,” said Dr. Kanal. “Now we’re talking about patients with normal kidneys. There are tens of millions of patients in the United States alone who are receiving these contrast agents and we don’t at this point know what the significance may be, if any.”

Rather than being defensive about the findings, radiologists should take the lead in studying their clinical implications, Dr. Kanal said. One potentially important area of study is cognitive function in people who receive multiple GBCA administrations.

“The question of clinical consequence has to be front and center until we can answer it,” Dr. Kanal said.

Future research will also focus on the relationship between gadolinium deposition and the nine different GBCAs approved for use by the FDA. GBCAs are classified as linear or macrocyclic based on their structure. Linear agents have an open chain structure, while the gadolinium ion in macrocyclic agents is “caged” inside the ligand. Macrocyclic GBCAs are considered more stable.

“From the knowledge we have, macrocyclic agents as a class are better at rendering the gadolinium excretable,” said Dr. Tweedle, a professor and Stefanie Spielman Chair in Cancer Imaging, Department of Radiology, Ohio State University Medical School, Columbus, in an interview with RSNA News. “That’s why molecules of this class are recommended for patients with renal impairment.”

Macrocyclic GBCAs may also be less likely to be retained in brain tissue, according to another June 2015 Radiology study.

Alexander Radbruch, M.D., J.D., of the University of Heidelberg Medical Center, Germany, and colleagues used MRI to compare two groups of 50 patients who had undergone at least six MRI examinations with either Magnevist, a linear GBCA, or Dotarem, a macrocyclic agent. The researchers found a signal intensity increase in the dentate nucleus and globus pallidus in the linear group but not in the macrocyclic group.

“These findings are especially important for people who receive multiple contrast administration, such as multiple sclerosis patients, pediatric patients and patients with metastases,” Dr. Kanal said. “If you have a choice and if all other considerations are equal, would you rather have a 5-year-old receive one of these agents associated with brain deposition or one that isn’t?”

The recent findings of gadolinium deposition in the brain have the potential to change the practice of radiology, which would ideally involve a higher profile for radiologists in the selection of MRI contrast, Dr. Kanal said..

At the institution level, radiologists could be involved in decisions about which GBCAs are kept in stock—decisions predominantly made today by non-physicians. At the patient level, radiologists can have a more prospective role in ensuring that MRI with contrast is used only when absolutely necessary. Dr. Kanal, who notes that he often cancels orders for contrast MRI when working in emergency neuroradiology, likened the potential role of the radiologist to that of a physician writing a prescription for medication.

“If we have a choice as to what GBCA to prescribe for our patients, why would I specifically choose to prescribe a contrast agent that has been shown to be associated with intracranial gadolinium accumulation rather than one that has not been shown to do so?” he asked.

Although future ramifications of the new research remain to be seen, the best-case scenario for patients involves a more central role for the radiologist, Dr. Kanal said.

“I hope that these new findings awaken us to the fact that current practices with respect to MRI contrast will no longer be acceptable,” he said. “Patients need to know that someone is watching their back and safeguarding their best interests, and the radiologist is in the best position to do that.” 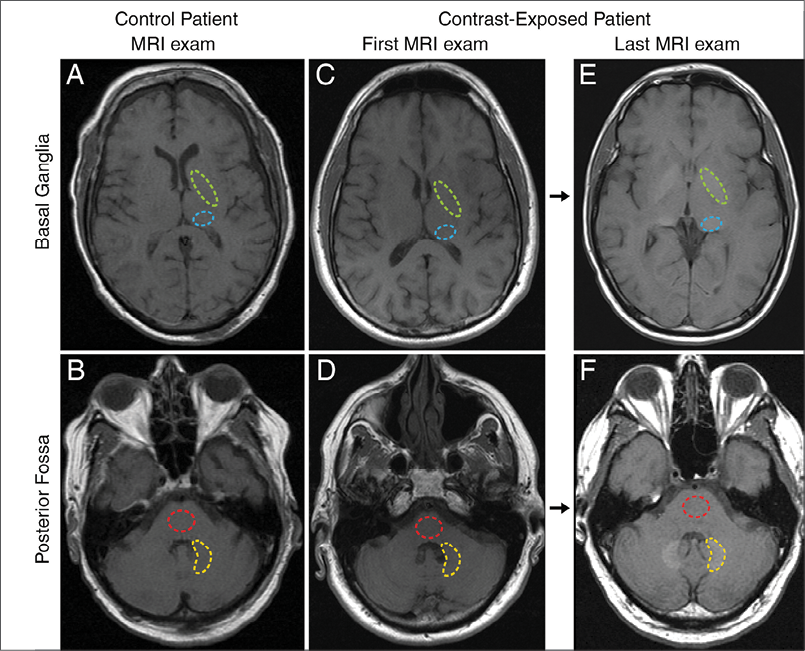