With the implementation of the Affordable Care Act, the introduction of new paymentmodels, and a shift from volume- to value-based radiology, radiologists are facing a number of challenges as they head into the foreseeable future.

But there are several steps radiologists can take to deal with these challenges going forward, according Vijay M. Rao, M.D., David C. Levin, M.D., and Jonathan W. Berlin, M.D., who presented “The Future of Radiology: What are the Threats and How to Respond to Them,” at RSNA 2013.

While all three radiologists addressed the same topic just one year ago at RSNA 2012, some circumstances have changed since then, said Dr. Rao, RSNA Board Liaison for Information Technology and Annual Meeting. “People were still wondering about the Affordable Care Act and whether that really meant a change from volume- to value-based radiology,” she said. “That has become a reality and now we are focusing on quality metrics. It’s important for us to become champions of quality in our institutions.”

Dr. Rao urged radiologists to become more visible within the hospital environment, particularly with the evolution and adoption of new payment models. “One thing that clearly needs to happen is that radiologists need to build bridges to hospital administrations,” she said. “As we evolve into bundled payments or the formation of ACOs (accountable care organizations), we’re no longer talking about fee-for-service, so radiologists may be in an unfavorable position unless the hospital recognizes their value.”

In the meantime, many of the challenges that have afflicted radiology over the last several years continue to do so. Dr. Levin pointed out that it’s clear the perception of radiology as a commodity continues to dog the specialty. He pointed to a recent article in the New England Journal of Medicine that called for Medicare to “extend competitive bidding to medical devices, lab tests, radiology diagnostic services and all other commodities.”

“There we are identified as a commodity like broccoli and toilet paper,” Dr. Levin said. “That’s the way we are being perceived by a lot of intelligent people.”

A “culture change” is needed, Dr. Levin said. Radiologists must act like true consulting physicians by screening imaging exams for appropriateness, supervising advanced imaging exams, giving patients access to their test results, and being available to consult with referring physicians.

In order to do these things, radiologists will have to change the way they look at productivity, Dr. Levin said. Co-presenter Dr. Berlin pointed out that in order to deal with declining reimbursements, radiologists have focused on increasing productivity while cutting expenses and reducing hiring.

This is problematic on several levels, Dr. Berlin said. It’s a problem when radiologists fail to pick up the phone or reach out to other clinicians or residents because these activities won’t increase RVUs, he said.

“Radiologists should behave more like consulting physicians,” Dr. Levin said, “even if it means we have to sacrifice some income to do it.”

Dr. Levin also urged radiologists to “take back the nights and weekends” from teleradiology companies; consider consolidating into larger groups in order to better cover those times as well as provide subspecialty expertise and achieve more market power and economies of scale; do more to publicize American College of Radiology (ACR) appropriateness criteria; and build bridges to primary care physicians who will be increasingly influential under new payment models.

In terms of utilization management, radiologists need to take on a larger role, Dr. Rao said. In the past radiologists have shied away from becoming utilization gatekeepers, she said, partly due to financial interests, as well as the possibility of alienating their colleagues by rejecting imaging tests as unnecessary.

“This is where radiologists have to take a leadership role in reducing unnecessary imaging,” she said.

Taking on that role can be accomplished in several ways, including educating medical students, staff and referring physicians about appropriate imaging and working with hospitals to install decision support systems linked to order entry.

Another major concern is that a bigger segment of the radiology job market is contracting. And a poor job market means “less clout and prestige for the specialty,” as well as less added-value as perceived by referring physicians and patients, Dr. Berlin said.

Groups should be prepared to hire more young radiologists, even if it means sacrificing income, Dr. Rao said. “We don’t want to send the message to medical students that there aren’t any jobs available in radiology. Radiology has always attracted the best and the brightest and we don’t want to see them shy away from entering the specialty.”

Utilization rates for CT, MR imaging and nuclear medicine have leveled off since experiencing rapid growth in the early part of the 2000s when they drew concern due to cost, potential overuse and, in the case of CT, the cancer risk associated with radiation dose.

“Imaging was the most rapidly growing of all physician services,” said Dr. Levin, professor and chairman emeritus of the Department of Radiology at Thomas Jefferson University, Philadelphia. “That led to a lot of concern, and that was partially responsible for the reimbursement cuts that have followed since then.”

The results of Dr. Levin’s study, however, showed that the rates began leveling off from 2009 until 2011, the most recent year with available data. CT dropped a small amount to 626 in 2010, and took a dramatic plunge to 500 in 2011, mostly the result of code bundling for CT of the abdomen and pelvis. Nuclear medicine also saw a gradual decline to 303 by 2009, then a sharp decline to 135 in 2010, again largely due to code bundling for primary myocardial perfusion imaging and its two add-on codes for left ventricle wall motion and ejection fraction. In 2011, the number fell again, to 128.

Despite code bundling appearing to have a dramatic effect on the trend lines for utilization rates, Dr. Levin said even without that development the growth had ended. He attributed the drop-off to a variety of factors beyond code bundling, including higher co-pays for patients and the growth of radiology benefits management companies (RBMs). Among other factors are reimbursement cuts, physician concerns about costs and radiation, and appropriateness criteria. The recession was also a factor, though the slowdown began before the recession hit.

All factors contributed to the leveling off, but Dr. Levin said RBMs played a major role. “RBMs have basically changed the way a lot of the ordering physicians think about ordering imaging,” Dr. Levin said. “They know they’re going to have to go through this preauthorization process. That has probably discouraged a lot of inappropriate use.”

Dr. Levin said it’s too soon to predict what the 2012 data will show, but he doesn’t believe the rates will increase. “There might be a little bit of growth, but it’s not going to be near the rate we saw in the early 2000s,” he said. “In fact, there may be no further growth.” 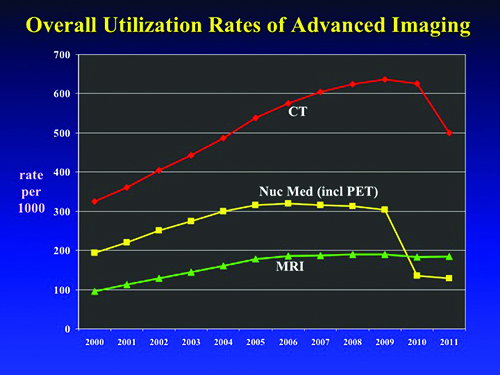