In concert with the RadioGraphics monograph, RSNA News recognizes the contributions of interventional radiology in patient care. Find additional research and articles at RSNA.org/News and RSNA.org/RadioGraphics.

A novel non-surgical approach that creates a fistula in the arm for dialysis access offers people with end-stage kidney disease a promising new option with a high success rate and minimal complications.

Patients with end-stage kidney disease require dialysis, either through the abdomen (peritoneal dialysis) or via hemodialysis, the more common option. With hemodialysis, blood is pumped out of the patient’s body into an “artificial kidney” dialysis machine that filters the blood before the blood is returned to the body. Safe, easy access to the blood vessels is critically important since patients typically undergo hemodialysis three times a week.

A surgical arteriovenous fistula (sAVF) has become the mainstay of vascular access creation and results in a surgically created connection between an artery and vein in the arm. It has advantages over other methods such as superior patency and lower thrombosis rates but also carries limitations, including the finite anatomic options for creation, high rates of non-maturation and the need for reintervention. 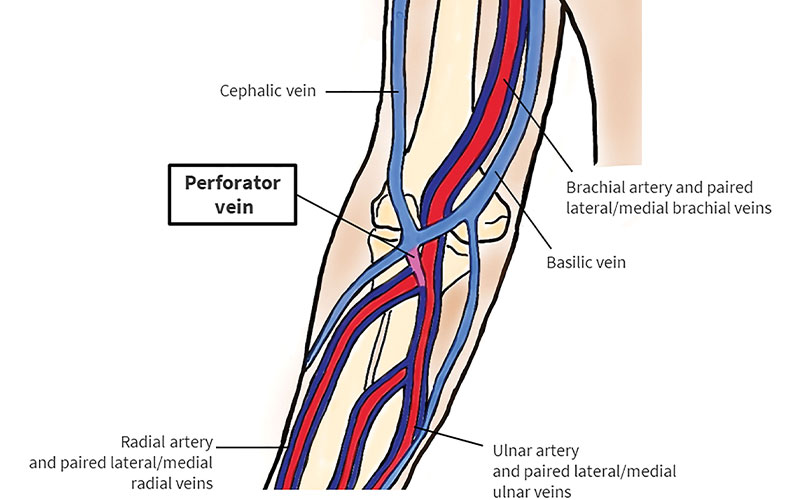 During the pAVF procdure, the doctor uses imaging to guide a tiny catheter device through the relevant blood vessels in the arm. The pAVF device—through either radiofrequency pulse or thermal energy—forms a connection between the vein and artery that allows blood to pass between them. The entire procedure takes approximately 30 minutes.

Benefits for the patient include the potential for reduced lifestyle disruption with fewer reinterventions and hospitalization requirements. In addition, the procedure does not leave behind a surgical scar and reduces the likelihood of aneurysmal formation owing to the split outflow. Candidates for pAVF formation include pre-dialysis patients, patients already undergoing dialysis, those with failing renal transplant or failing peritoneal dialysis and patients with previous surgically formed arteriovenous fistulae or grafts.

Conscious sedation or general anesthesia are not necessary, although individual institutional practice may vary, Dr. Jaffer said. At his institution, Dr. Jaffer works alongside an anesthetist or a suitably trained practitioner who can administer a regional nerve block for patients. The nerve block prevents arm movement during the procedure and can also promote vessel dilatation and minimize vessel spasm.

Dr. Jaffer emphasized that even though pAVF has numerous benefits, it is not intended to be a replacement for other forms of dialysis access. Instead, it adds to the complement of access options available.

“There is no one-size fits all approach, and the most appropriate access has to be matched to the individual patient on a case-by-case basis,” Dr. Jaffer said. Importantly, pAVF creation does not preclude future vascular access options.

The authors recommend a “distal to proximal” approach to pAVF creation to ensure that the full breadth of access options can be sequentially used, preserving proximal vessels for future vascular access sites.

The learning curve period for pAVF creation is estimated to be between five and 10 cases for operators with US and endovascular proficiency.

“As with any interventional radiology procedure, the learning curve reflects familiarity with the relevant anatomy, appreciation of how the device works, and common troubleshooting scenarios including requisite secondary interventions,” Dr. Jaffer said.

Introducing a pAVF service requires the collaboration of a cross-specialty multidisciplinary team, Dr. Jaffer said, including both nonclinical and clinical stakeholders who are aligned and unified in adopting a pAVF service. The service must offer accurate US screening for appropriate patient selection and safe follow-up surveillance with re-intervention as necessary.

In the near term, Dr. Jaffer and his research team hope that pAVFs will be recognized within both national and international guidelines and become more established as part of the standard framework when considering dialysis access.

“We are excited to see what the future holds for pAVFs,” Dr. Jaffer said. “As more data continues to emerge and more centers share their experiences in different patient populations, the evidence base will continue to grow and we will gain a better idea of which patient subgroups benefit most from pAVF.”