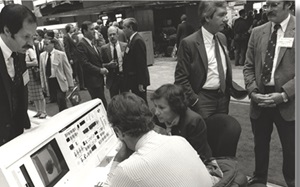 Attend the RSNA 2022 Technical Exhibits Halls to experience a dynamic array of advancements that are shaping the future of the specialty. This year, more than 600 manufacturers, suppliers and developers are ready to show you the latest medical imaging innovations and solutions. Gain even more insight when you visit the Virtual Exhibits where additional companies have created digital presentations and demonstrations that highlight the products that radiologists need in their practice now.

Filled with exhibits, demonstrations, presentation theaters and special events, the Technical Exhibits offer products, solutions and services to meet the needs of every attendee.

“This year’s annual meeting is the ideal setting to engage with industry experts and discover the latest imaging products and services,” said Curtis P. Langlotz, MD, PhD, RSNA Board liaison for information technology and annual meeting and professor of radiology and biomedical informatics, director of the Center for Artificial Intelligence in Medicine and Imaging, and associate chair for information systems in the Department of Radiology at Stanford University. “The Technical Exhibits Halls allow our industry partners to showcase products that help our attendees enhance their practices and improve patient care.” 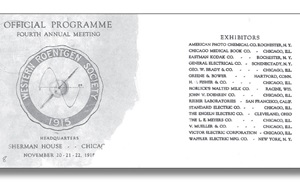 Growth In Technology Leads to Growing Technical Exhibits
It will surprise no one that 100 years ago,  the annual meeting’s Commercial Exhibit, which is the precursor to the Technical Exhibits Halls, was not the behemoth that it is today.

In the 1920s, there were often fewer than 20 exhibitors onsite for the annual meeting. Most of the exhibits revolved around X-rays and the sale of the plates, equipment and apparatus; therapeutic lamps, clinical demonstrations involving the fluoroscope and stereoscope; and instruments used in the application of radium.

Other early exhibitors included dental  film developers and the Eastman Kodak Company showcasing photographs, radiograms and photographic apparatus. Some of the more diverse demonstrations included the 1924 exhibit by the Horlick Malted Milk Company that demonstrated their use of milk as a suspension medium for gastrointestinal tract X-rays, complete with samples of the malted milk powder and tablets.

The Commercial Exhibit at the meetings of the early 1900s took up less than 8,000 square feet in a hotel ballroom. Early annual meetings rotated between cities, eventually ending up at Chicago’s Palmer House. Today’s Technical Exhibits Halls at McCormick Place cover more than 365,000 square feet of space.

Obviously, in the early 20th century if you weren’t onsite at the meeting you would miss out on the opportunities afforded at the Commercial Exhibits. To drive radiologists to attend, a special rate was promoted in 1928 by numerous railway transportation companies encouraging U.S.  and Canadian attendees (but only those east of Winnipeg) to travel to the meeting.

“RSNA Technical Exhibits have grown over the years to accommodate the incredible variety of technologies that have developed to support medical imaging,” Dr. Langlotz said. “A robust Virtual Exhibit experience is available for anyone who can’t attend in person or who wants a more immersive experience. The exhibitors of the early 1900s would have trouble envisioning today’s exhibit halls, with onsite CT, MRI, PACS and virtual reality.” 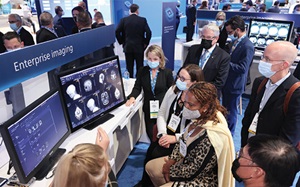 Technical Exhibits Halls Tailored To Meet Attendees Where They Are
The size of the floor may have increased and the technology may be lightyears ahead of where it was, but one thing remains consistent for the Technical Exhibits: the attendees.

While attendees at the early meetings might have visited a booth for a good  conversation, a few examples of products and a handshake to seal the deal, today’s attendees will experience a variety of ways to gain insight and partake in the advancements being showcased. Whether you enjoy hands-on learning, expanding your network or attending special engagement events, you will find a wide variety of ways to experience the Technical Exhibits.

For example, when you visit the AI Showcase, the hub for all AI innovation being presented at the meeting, you can walk through the exhibits, attend presentations at the AI Theater and see real-world scenarios of how AI fits into workflow at the Imaging AI in Practice demonstration.

You can also experience advances at the 3D Printing & Mixed Reality Showcase, where you can connect with experts specializing in these fields and even try some virtual reality patient care products. There is also the First-Time Exhibitor Pavilion, Educators Row and Recruiters Row, each offering attendees a unique opportunity to learn about radiology services and products. 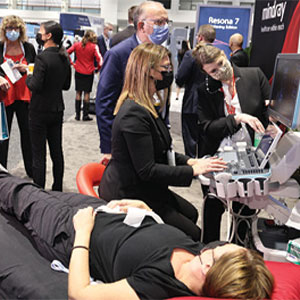 Dive deeper into information  about products and services at the one-hour Corporate Symposiums, the presentations at the Innovation Theater or by attending the Lunch & Learns.

Attending the Virtual Exhibits also gives you the chance to experience realworld simulation, participate in live chat discussions and network with colleagues who are interested in the technology driving the future of radiology. All meeting registrants can access the Virtual Exhibits and industry programming until May 1, 2023, at noon CT.

“Radiologists appreciate the opportunity to see simulations of how technology will benefit their workflow and, most importantly, improve patient care and the patient experience,” Dr. Langlotz said.  “The Technical Exhibits Halls are the place to take a deep-dive into the solutions and insights that will empower the specialty.”

Register for the meeting at RSNA.org/Annual-Meeting.