In 2019, shortly before the outbreak of the COVID-19 pandemic, doctors in Wisconsin discovered an unexplained respiratory illness. Although they didn’t know it at the time, the illness presented with many of the same clinical and imaging signs as COVID-19 pneumonia, including persistent cough and bilateral and symmetric ground-glass opacity in the lungs.

But unlike COVID-19, this illness was not caused by a virus. It was the result of vaping.

Because many smokers regard vaping as being safe, the use of e-cigarettes has significantly increased over the course of the past decade. As a result, cases of e-cigarette or vaping-induced lung injury (EVALI) have also increased.

“Although e-cigarettes, also known as vaping, were initially introduced as a safer alternative to traditional cigarettes, the recent discovery that vaping can cause acute lung injury shows that it also has potential health risks,” said Constantine Raptis, MD, associate professor of radiology at the Malllinckrodt Institute of Radiology at Washington University School of Medicine in St. Louis.

“The EVALI outbreak was widely publicized prior to the COVID-19 pandemic,” said Seth Kligerman, MD, associate professor of radiology and section chief of cardiothoracic imaging at the University of California, San Diego. “In fact, between March 2019 and February 2020, EVALI hospitalized 2,807 and killed 68 people.”

Patients with EVALI typically have a nonspecific clinical presentation characterized by a constellation of respiratory, gastrointestinal and constitutional symptoms. However, before an EVALI diagnosis can be made, the patient must have a history of recent vaping within 90 days, other etiologies must be excluded, and opacities must be present on chest imaging.

Vaping History is Key to Diagnosis

Dr. Raptis stressed that imaging is important in patients with acute lung injury to ensure early detection. EVALI’s symptoms can be very similar to many other respiratory diseases — including COVID-19. “Because both EVALI and COVID-19 can manifest with similar clinical and imaging findings, an accurate diagnosis is essential, especially considering the differences in treatment and the need for infection prevention and control,” Dr. Raptis said. 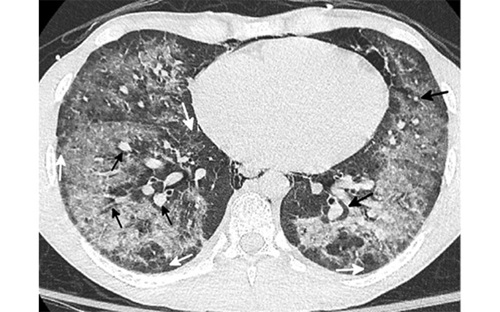 Axial CT scan in a 19-year-old man presenting to the emergency department in January 2021 with presumed COVID shows diffuse ground glass opacity with conspicuous subpleural (white arrow) and peribronchovascular (black arrow) sparing. A small amount of pneumomediastinum was present. Based on the pronounced peribronchovascular sparing in a young patient, an organizing pneumonia pattern of EVALI was suggested in addition to COVID related pneumonia. The patient admitted to vaping THC products multiple times a week and was negative for COVID on three consecutive PCR tests. He rapidly improved after steroid administration and was discharged from the hospital in two days.

Drs. Raptis and Kligerman co-authored a Chest Journal retrospective study describing the CT imaging appearances of 160 subjects diagnosed with EVALI, which was the largest cohort collected to date.

One of the study’s key findings is that most patients with EVALI have CT imaging findings along a spectrum ranging from organizing pneumonia (OP) to diffuse alveolar damage (DAD), both of which can mimic causes of acute lung injury.

“A DAD pattern was associated with patients who just started vaping compared to patients who had been vaping for many months or years,” Dr. Kligerman explained.

“Whenever a radiologist sees these findings in conjunction with the more typical manifestations of acute lung injury, EVALI should be considered as a potential cause,” Dr. Raptis noted.

“This is why I believe vaping exposure should be included in the clinical history of all patients with CT findings of acute lung injury without another known cause — particularly if they are young and otherwise healthy,” Dr. Kligerman added.

EVALI in the Pediatric Population

Both researchers indicated that they were surprised by the young age of EVALI patients, many of whom are still in high school.

However, according to the 2021 National Youth Tobacco Survey, more than two million middle and high school students are vaping. This makes e-cigarettes the most commonly used tobacco product among U.S. youth. As a result, patients under 18 years of age account for a significant portion of all reported U.S. hospitalizations due to EVALI.

“This population is particularly vulnerable to e-cigarette use and its potentially life-threatening consequences,” said Maddy Artunduaga, MD, assistant professor of radiology in the Pediatric Radiology Division at UT Southwestern Medical Center and a pediatric radiologist at Children's Health Medical Center, both in Dallas.

Dr. Artunduaga was the lead author of a study published in Radiology that specifically looked at the effects of EVALI on teens. The retrospective study reviewed chest CT images and X-rays of 14 patients (7 boys and 7 girls) ranging in age from 13 to 18 years old. All patients had respiratory symptoms and had used an e-cigarette or engaged in dabbing, which is the use of e-cigarettes or vapes that include cannabis concentrates, in the 90 days prior to symptom onset.

Although symptoms varied among patients, many exhibited shortness of breath, cough and chest pain. Some had initially isolated gastrointestinal symptoms, such as vomiting, nausea, diarrhea or abdominal pain. Others exhibited fever, chills, weight loss and fatigue.

“We first detected abnormal pulmonary findings in some of our patients who had this presentation and had undergone CT of the abdomen and pelvis,” Dr. Artunduaga said. “Therefore, radiologists may be the first to suggest EVALI as a diagnostic consideration.”

As Dr. Artunduaga explained, bilateral and symmetric ground-glass opacity in the lungs, frequently associated with consolidation, often of lower lobe predominance, was the key imaging finding for pediatric patients with EVALI. On CT, subpleural sparing was also visualized in 79% of patients.

“Another imaging feature observed on CT in 36% of our pediatric patients was the reversed halo sign, which is characterized by the presence of a central groundglass opacity surrounded by denser consolidation of crescentic shape or complete ring,” Dr. Artunduaga added.

Dr. Artunduaga notes that because chest X-ray alone does not allow for the sufficient characterization of the patterns of EVALI in pediatric patients, CT is needed for a complete assessment.

“CT provides a better evaluation of the extent and degree of involvement, as well as a better assessment of the characteristics of abnormal pulmonary findings,” she explained. “This can lead to the early diagnosis of EVALI, which would ultimately allow for its timely management in the pediatric population.”

Recent advances in low-dose CT techniques have yielded diagnostic exams that have decreased radiation dose up to 93%. Thus, according to Dr. Artunduaga, the radiation dose associated with low-dose CT is justified in the evaluation of suspected EVALI in pediatric patients. 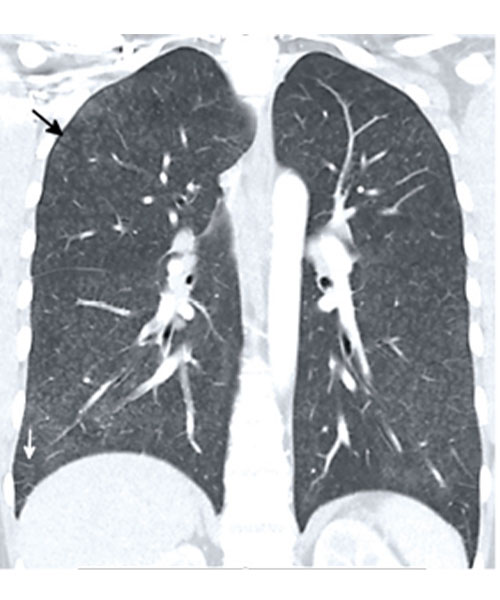 22-year-old man with fever, abdominal pain, and dyspnea presents to the emergency department in August 2021. Coronal CT image shows diffuse hazy centrilobular nodules (black arrows) and mild septal thickening (white arrows). The heart (not shown) was normal. The imaging pattern is consistent with an airway-centered organizing pneumonia pattern of EVALI, which was suggested based on the imaging findings. The patient admitted to daily vaping of THC with his symptoms developing after purchasing a new vape pen two days before admission from a legal vape shop in California. While diffuse centrilobular nodules can also be seen with excipient lung disease, the nodules in excipient lung disease and smaller and well-defined and right heart strain is also often present.

While there has been a noticeable decrease in EVALI cases since 2020 that is likely due to the COVID-19 pandemic, which has closed schools and limited social activities limited, the illness has not gone away. Furthermore, because EVALI is no longer being officially tracked, it is difficult to know whether cases are increasing.

“EVALI has by no means disappeared,” Dr. Kligerman said. “We continue to see numerous cases, even during the pandemic, many of which are initially misdiagnosed as COVID-19.”

Radiologists will continue to encounter acute/subacute lung injury from different triggers, including vaping.

“Radiologists continue to play an important role in the initial detection and follow-up of pediatric patients with EVALI,” Dr. Artunduaga said. “When these imaging findings are observed in pediatric patients, with or without the history of exposure to e-cigarette or vaping products, EVALI should be included as a diagnostic possibility.”

“By being able to recognize the CT findings of lung injury, we will be properly equipped to identify them and recognize their clinical importance,” Dr. Raptis concluded.

Access the Chest Journal study, “CT Findings and Patterns of e-Cigarette or Vaping Product Use Associated Lung Injury,” at journal.chest.org.