Radiologist Shortage in the U.K. Continues to Deepen

The worsening radiology shortage in the U.K. is becoming so critical that most radiology clinical directors say they do not have enough radiologists on staff to deliver effective patient care, according the Royal College of Radiologists (RCR).

The impact on the delivery of health care has been massive, said RCR President Nicola Strickland, MD. In fact, at any one time across the U.K., 250,000 patients will be waiting for more than 30 days (on average) for results on their imaging study, according to Dr. Strickland.

“The shortage has resulted in a huge reporting backlog and an inability to provide safe interventional radiology,” she said. “And you have to remember that imaging is absolutely fundamental to the whole of hospital-based medicine.

Released in April, the RCR’s “Clinical Radiology U.K. Workforce Census Report 2018,” found that just 2% of radiology departments were able to fulfill their imaging reporting requirements within contracted hours in 2018. In addition, only one in five U.K. trusts and health boards has enough interventional radiologists to provide safe 24/7 service to perform urgent procedures.

“The shortfall reflects the increased utilization of imaging in all patient pathways within the U.K.,” said Prof. Mark Callaway lead author of the report and the RCR’s medical director of professional practice for clinical radiology. “And it reflects the failure to train enough radiologists within the U.K. to meet the demand for imaging.”

The problem is a lack of resources to train radiologists, Prof. Callaway said. “We actually have an excess number of people applying for training,” he said. In fact, radiology remains a widely popular specialty. “We are turning away two or three junior doctors who want to specialize in radiology for every training post we have,” Dr. Strickland said.

The RCR report confirms that there are not nearly enough radiology training positions available in the U.K. to cover the shortfall in radiologists. One of the eye-opening findings of the report is the fact that between 2017-2018, National Health Service (NHS) hospitals spent £165 million on private teleradiology outsourcing and NHS insourcing (out of hours extra reporting) in order to cover radiology workload — more than three times what was spent in 2014.

This money would pay for 1,887 full-time consultant (staff) radiologists, which is more than enough to cover the current shortage. The irony is that if the government provided more funding for radiology training, it would provide a sustainable, cost-neutral solution to the radiology shortage, Dr. Strickland said.

“While a significant increase in funding would be needed initially to support these new trainees, it would pay for itself within five years,” she said.

In the meantime, the shortage is also causing low morale and burnout among radiologists facing increasing workloads over prolonged periods of time. In fact, according to the workforce census, 1 in 3 clinical radiologists reported experiencing work-related stress that negatively impacts their performance.

Additionally, more radiologists are retiring early due to concerns about work-life balance. And the situation is exacerbated by the increasing demand for imaging. “I think everyone would agree that there has been an explosion in the requirement for imaging,” Prof. Callaway said. “Our workload is going up all the time,” said Dr. Strickland, who pointed out that not only are radiology departments doing more imaging, but that the imaging is also becoming more complex. “We are doing studies like cardiac CT, CT colonography and multiparametric prostate imaging, all of which take much longer to report.”

The obvious long-term solution to the shortage is to invest in more training, Prof. Callaway said. One method would be to establish more radiology training academies, such as one that was launched this year in Wales. The academy has the capacity to teach up to 20 or more new trainees annually — a critical goal for a region that, after Northern Ireland, has the highest radiology post vacancy rate in the U.K.

In the short term, Dr. Strickland said, the RCR has been promoting a global fellowship strategy. Under this program, fully-qualified post-FRCR fellows from overseas can be appointed to unfilled consultant (staff ) radiology posts to perform work they are already trained to do, such as plain radiographic reporting, general ultrasound, general body and head CT.

“They will have the opportunity to get specialist training in whatever area of radiology they are interested in,” Dr. Strickland said. “They would come to the U.K. on an ‘earn, learn, and return’ basis for three years,” she said. “Of course, I would be delighted if they stay longer, but the point is this is a win-win situation because they come to the U.K. to get additional specialist training, and we get their contribution to the NHS.” 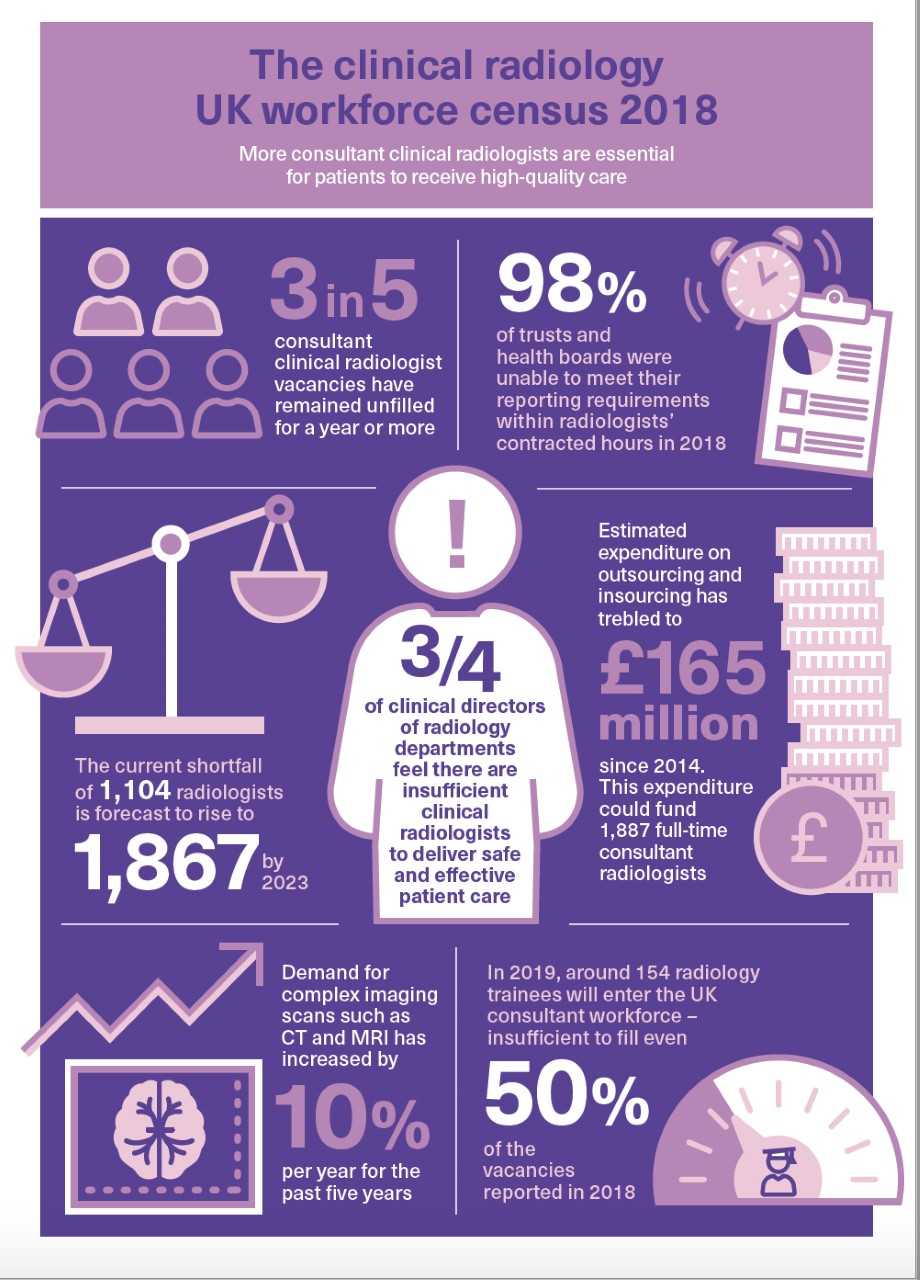