The developing field of radiogenomics has made gradual but significant advances in associating molecular profiling measurements with noninvasive imaging in oncology. Nevertheless, more work needs to be done in order to capture the full scope of disease phenotypes.

In recent years, researchers have realized that capturing the complex biology of such tumors and their response to therapy would require deeper classification systems – ones that incorporate information from high-throughput molecular profiling data.

Working with a team of researchers, Neema Jamshidi, MD, PhD, a clinical instructor at the Department of Radiological Sciences, David Geffen School of Medicine at UCLA, has developed just such a classification system: a radiogenomic risk score (RRS) that bridges the gap between quantitative tissue-based molecular data, clinical imaging findings and clinical phenotypes for renal cell carcinoma. The methodology applied to develop the RRS could have useful applications for detecting and tracking other types of cancer and potentially other diseases as well.

“Most radiogenomic studies to date have focused on simultaneously identifying imaging to genomic association maps in an untargeted fashion, but we were curious to do something different,” Dr. Jamshidi said. “What if we could systematically construct an imaging surrogate that targeted and tracked a specific molecular (in this case transcriptomic) signature, enabling clinical outcomes to be assessed noninvasively and longitudinally? We were able to do that, and it’s kind of exciting.”

Dr. Jamshidi and colleagues designed a noninvasive surrogate of the molecular assay (SOMAs) – the RRS – to serve as a surrogate for the previously developed gene expression based supervised principal component (SPC) risk score, a quantitative multigene expression signature that has been shown to predict disease-specific survival in patients with clear cell renal carcinoma.

Researchers then independently validated the predictive power of the RRS in an independent cohort of 70 patients with clear renal cell carcinoma and correlated that data with subsequent disease specific survival.

The resulting RRS was shown to correlate with the SPC score in the training group and in the validation group. In addition, the RRS for clear-cell renal cell carcinoma predicted disease-specific survival, independent of disease stage, disease grade and performance status.

The research breaks new ground in key areas, including its potential applications for other types of cancer, according to Radiology Editor Herbert Y. Kressel, MD.

“The methodology can potentially be applied to many other tumor types where the relationship of multi-gene expression data to outcome has been established,” Dr. Kressel said. “It is hoped that the use of similar tools may provide an effective means to noninvasively characterize tumors, to better understand the biology of tumor response and to potentially reduce the need for repeated tissue sampling while managing these patients.”

And instead of focusing on single measurements of features, the research gathers and integrates multidimensional measures to capture complexities of the biologic process and their response to therapy.

Calling the research a “truly collaborative effort,” Dr. Jamshidi credits the success of his research to the teamwork of colleagues from multiple institutions over several years.

“In particular, I want to specifically recognize the senior author, Dr. Mike Kuo, without whom the study would not have been performed, as well as Dr. Dieter Enzmann and his support from UCLA Radiology.

“The Margulis Award was completely unexpected, but it is extremely gratifying,” Dr. Jamshidi said. “It’s really a great honor and total surprise. I am so thankful that Radiology editors recognized our study, as it took many people multiple years to see the results of our research.”

Expanding on his Radiology research, Dr. Jamshidi and colleagues used the RRS biomarker to stratify outcomes in patients with metastatic renal cell cancer in a Phase 2 clinical trial in a study published in the August 2016 issue of European Radiology.

“One of our main goals is to achieve robust automated segmentation,” he said. “This would improve consistency, reproducibility and throughput in developing and using radiogenomic-based SOMAs.”

Margulis a Leader in Innovation, Research

One of radiology’s preeminent leaders, Alexander R. Margulis, MD, is a distinguished investigator and inspiring visionary whose pioneering work in gastrointestinal radiology is felt throughout the specialty today.

During his more than two decades as chair of radiology at the University of California, San Francisco (UCFS), he built the department into a preeminent global leader in research and education. Under his leadership, the department pioneered the development of CT and MRI as clinical tools.

Moreover, he built the radiology department into an internationally renowned center for education, training important radiology leaders in the U.S., France, Germany, Sweden, Japan and China.

Dr. Margulis is an emeritus clinical professor of radiology at the Weill Cornell Medical College in New York City.

Dr. Margulis was appointed to the rank of Chevalier of the French Legion of Honor for his contribution to radiology innovation and research. He received the RSNA Gold Medal in 1983. 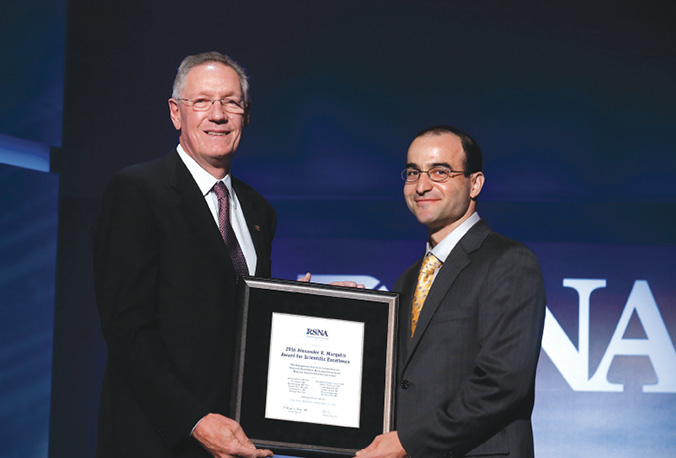