When interpreting abdominal CT studies, radiologists with more experience are more flexible in their eye movement behavior and are more likely to maintain better performance during long work hours than residents in training, according to researchers in Finland.

“Expert behavior is manifested in distinct eye-movement patterns of proactivity, reactivity and suppression, depending on the nature of the task and the presence and type of abnormalities,” said Raymond Bertram, MS, PhD, a senior lecturer in the Psychology Department at the Turku Institute of Advanced Studies, the University of Turku, Finland. The research was published in the December issue of Radiology.

Working with the university’s Department of Psychology, Dr. Bertram and colleagues determined that analyzing residents’ eye movement behaviors as they gain experience “could be useful to monitor individual residents’ learning curves, and contribute to a further shift toward competency-based resident training.”

As radiologists interpret studies, their eye movements are composed of fixations — maintaining the gaze on a single location — and saccades, the rapid movements of eyes as they shift between fixation points. “Saccade length and fixation duration are parameters that reflect the moment-to-moment cognitive processing of visual information,” the researchers noted.

In the study, 29 residents classified as having either early (less than two years of specialist education) or advanced experience (more than two years of specialist education) participated along with 12 specialists with a minimum of two years’ experience in abdominal radiology. To record the volunteers’ eye movements, the researchers used a desktop-model eye tracker with a forehead and chin rest, collecting eye movement data at a sampling rate of 1000 Hz.

Volunteers were shown CT studies as a continuous presentation at a fixed frame rate, one set at three frames per second and another at five frames per second. These speeds were chosen based on earlier data indicating that a frame rate of about four per second was satisfactory for comprehensive CT reading, the researchers explained.

The team determined that experienced radiologists showed more flexibility in their eye movement behavior than the residents.

Specialists and advanced residents exhibited longer fixation durations at five frames per second than at three. In the presence of lesions, saccade lengths of the experienced radiologists were shorter than those of the residents. Notably, the early residents’ detection rate decreased as they worked longer hours.

“However, in order to make a good assessment of this potentially important phenomenon, in the future, participants should be tested in the beginning and end of the working day.”

Dr. Bertram emphasized that the study was conducted under difficult visual circumstances in order to push the visual limits of radiologists and residents in training.

“It is remarkable that under these circumstances so many of the abnormalities were detected and that eye movement behavior is as efficient as it is, also signifying that adaptivity can be observed already for early residents,” Dr. Bertram said.

One observation that surprised Dr. Bertram’s team was how closely eye movement behavior of advanced residents resembled that of expert radiologists.

“Also surprising was that even some early residents were quite similar to experts in both eye movement behavior and diagnostic accuracy, even after one year of training,” he said. “We should investigate them more thoroughly in the future, because they probably will make ‘star radiologists’.”

Research in imaging perception is inspiring projects like the Image Perception Lab held at RSNA 2016. Sponsored by the U.S. National Cancer Institute (NCI), the lab invited RSNA attendees to volunteer their own time reading data in an interactive setting. 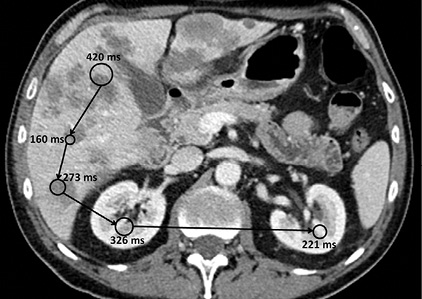 Fixations and saccades projected on a CT image of a patient with liver metastases. Each circle represents a fixation and the size of a circle reflects fixation duration, which appears next to each circle. Around fixations, fine image details can be perceived. Saccades are represented by arrows between fixations; the amplitude of saccades varies both within and across radiologists. ms = milliseconds.(Radiology 2016;281:3;805-815) ©RSNA 2016. All Rights Reserved