Radiologists are essential to developing the new research and technology driving the specialty, according to international experts who met at RSNA 2016

Communication is essential to advancing the critical, but complicated, relationship that exists between researchers, radiologists and the imaging industry throughout the world.

To that end, a group of radiology leaders from across the globe met during the International Trends meeting at RSNA 2016 to discuss some of the issues that are central to strengthening that relationship among all stakeholders — including those in developing countries.

“Our relationship with industry is very important,” said James Borgstede, MD, RSNA Board liaison for international affairs, during the session’s opening comments. “We have to facilitate an environment that will allow products to get to the market so they can flourish.”

Moderated by Maximilian F. Reiser, MD, of Germany, the session included radiology leaders from Uganda, China, the Netherlands, and the U.S., as well as industry representative Thomas N. McCausland, BSEE, MBA, former CEO of Siemens Medical Solutions, and past member of the RSNA Research & Education (R&E) Foundation Board of Trustees.

Attendees from radiological societies in Korea, Canada, Brazil and many other countries joined in a group discussion later in the session.

From an industry standpoint, McCausland stressed that research is the cornerstone of product development and that radiologists are critical to the progress of research.

“Radiologists are essential to developing new technology, which helps to ensure clinical efficacy for the imaging technology and products a company develops,” McCausland said. “Developing a product in a vacuum is inefficient.”

But the closer a product gets to clinical application, the more caution needs to be exercised between industry and the end user, said Anne G. Osborn, MD, Distinguished Professor, University of Utah School of Medicine, William H. and Patricia W. Child Presidential Endowed Chair in Radiology. “The process needs to be clear and transparent,” Dr. Osborn said.

McCausland and Dr. Osborn agreed that one of the best ways to ensure transparency is through nonprofit societies such as RSNA, which provides millions of dollars in funding to investigators across the world through its Research & Education (R&E) Foundation.

“Organizations like the R&E Foundation put a mechanism between industry and the end user,” said Dr. Osborn, a past chair of the R&E Foundation Board of Trustees and a 2006 RSNA Gold Medal recipient. “The process is transparent and unbiased.”

Public-private partnerships — such as the Innovative Medicine Initiative (IMI) in Europe — offer another model for advancing research, according to Gabriel P. Krestin, MD, PhD.

The IMI, a public-private partnership between the European Union and the pharmaceutical trade industry (represented by the European Federation of Pharmaceutical Industries and Association), brings together universities, industries, small and medium-sized enterprises, patient organizations and regulators in collaborative research projects, including imaging research.

“This is one example of how the public and private entities can collaborate to generate successful products,” said Dr. Krestin, a professor of radiology and chair of the Department of Radiology at Erasmus University Medical Centre Rotterdam, the Netherlands, who was named an RSNA Honorary Member in 2013. “Imaging plays a critical role in this initiative.”

While fostering technology that moves patient care forward is critical, radiology leaders from Uganda and China also stressed the need for industry to create robust products that accommodate the unique environmental needs that exist in developing countries.

Because experts aren’t always available to operate equipment, ease of use and access to training is also critical, he said. “Staff operating the equipment often don’t have the expertise necessary, which is why training is so important,” said Dr. Kawooya, also an honorary professor in radiology, Makerere University, Kampala, Uganda.

And although large countries like China have booming metropolitan areas, there is still a critical need for equipment that can adequately serve the outlying rural areas, said Xiaoyuan Feng, MD, professor and chairman, Department of Radiology, Huashan Hospital, Fudan University, Shanghai, P.R. China.

“China is a huge country, and we need simpler systems to serve our rural areas,” he said. “We need equipment that is high- performance, low-cost and easy to use by technicians.”

Drs. Kawooya and Feng stressed the need for industry to provide training and education to users so that technology can fully benefit the patients it was designed to serve.

That is also the goal of the imaging industry, McCausland said. “Industry has no desire to get equipment to market and not have it used properly,” he said.

Meeting attendees also mentioned the need for improvement of service from vendors and recognition of the many influencers and decision makers involved. 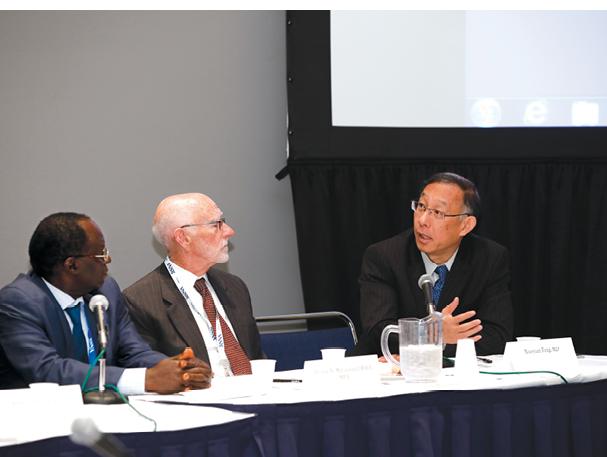 Radiologists from across the globe met to discuss the relationship between researchers, radiologists and the imaging industry at RSNA 2016.
Editor's Picks