The second version of the Prostate Imaging Reporting and Data System (PI-RADS) is proving to be an effective tool for preoperatively predicting clinically significant prostate cancers.

The first version of PI-RADS was developed by the European Society of Urogenital Radiology (ESUR) in 2012, prompted by a recommenation from the AdMe Tech Foundation’s International Postate MRI Working Group in 2010.

When limitations emerged, several other groups joined to form a PI-RADS v2 Steering Committee to update and build on the initial system.

The second version of PI-RADS was developed by the American College of Radiology (ACR), ESUR and the ADmeTech Foundation in 2014 as a tool to standardize the interpretation and systematic reporting of muliparametric MRI (mpMRI), which has shown great promise for diagnosing psotate cancer.

Introduced at RSNA 2014, PI-RADS v2 offers a simplified scoring system that focuses on the detection and exclusion of clinically significant prostate cancer. In coordination with RSNA’s RadLex® Steering Committee, which coordinates the development of a comprehensive lexicon for standardized indexing and retrieval of radiology information resources, PI-RADS v2 set standards for communicating the risk and location of aggressive prostate cancer.

Research is demonstrating the effectiveness of PI-RADS v2. In a July 2016 Radiology study, lead author Sung Yoon Park, MD, PhD, of the Department of Radiology and Research Institute of Radiological Science at Yonsei University College of Medicine, Seoul, and colleagues showed that PI-RADS v2 may help diagnose clinically significant prostate cancer before surgery, which would aid in clinical decisions regarding upfront treatment or active surveillance of prostate tumors.

Experts say the findings help validate PI-RADS v2 at a time when mpMRI is expanding considerably as a tool for detecting prostate cancer.

“It’s exciting to see research such as this that really demonstrates the widespread application of PI-RADS v2 and shows how useful this can be in clinical practice,” said Clare M. Tempany-Afdhal, MD, a member of the PI-RADS v2 Steering Committee.

In the Radiology study, Dr. Park and colleagues analyzed 425 patients with prostate cancer who had undergone MRI and radical prostatectomy.

“Our data suggest PI-RADS v2 has the potential to be a preoperative tool for risk stratification of prostate cancer,” Dr. Park said. “In addition, PI-RADS v2 may play a role as a parameter of various preoperative nomograms, which may also aid in treatment planning.”

Among other changes, PI-RADS v2 streamlined the scoring system that was used for the original version. PI-RADS v2 uses a 1-5 scale to categorize the likelihood of a clinically significant cancer being present. Dr. Park and colleagues sought to test the utility of the scale.

Dr. Tempany-Afdhal and colleagues were pleased that the Radiology results validated the updated guidelines.

“When we introduced PI-RADS v2 at RSNA 2014 and subsequently published that version in 2015, we really had no idea how well it would be accepted or validated,” said Dr. Tempany-Afdhal, professor of radiology at Harvard Medical School, the Ferenc Jolesz Chair of Radiology Research at Brigham & Women’s Hospital in Boston, and a member of the RSNA Committee on Scientific Affairs.

Two things stood out to Dr. Tempany-Afdhal about the Radiology results. First, by using a surgical population for the study, the researchers identified every patient who had a suspicious lesion as well as a biopsy-proven prostate cancer that required surgery.

She also pointed to the close inter-reader agreement demonstrated in the study. The readers’ weighted Kappa (k) score, which is used to measure statistical agreement, was 0.801 for PI-RADs v2 scores of 4 or better. A weighted k score of 1 equals total agreement.

“Results show really good agreement that has not been reproduced in most other U.S. studies I have seen,” Dr. Tempany-Afdhal said.

PI-RADS is a Living Document

The effectiveness of PI-RADS v2 has helped spur the prostate imaging boom by providing standardized guidelines for radiologists across the globe, said Jelle Barentsz, MD, PhD, co-chair of the ACR/PI-RADS v2 Steering Committee.

“Now we all speak the same language all over the world — and both radiologists and urologists are willing to learn this language,” said Dr. Barentsz, a professor of radiology and chair of the Radboud Prostate MR-Reference Center of Radboud University Medical Center, the Netherlands.

Because PI-RADS v2 is meant to be a living document, the steering committee’s work is ongoing. Dr. Tempany-Afdhal said the committee wants to see more research like the study conducted by the Korean researchers to help guide them.

“We want feedback from the community about where it’s working and where it isn’t working. PI-RADS is a living document, so it will definitely evolve over time,” Dr. Tempany-Afdhal said.

Demand for PI-RADS Training is Booming

Interest in prostate imaging has been booming since the second version of the Prostate Imaging Reporting and Data System (PI-RADS v2) was introduced at RSNA 2014. The effectiveness of multiparametric MRI (mpMRI) in diagnosing prostate cancer has increased the need for radiologists to be trained on the technique, said Jelle Barentsz, MD, PhD.

“Radiologists must now perform a technique they did not learn during their radiology education, since mpMRI of the prostate to detect significant cancers was not part of their training,” said Dr. Barentsz, professor of radiology and chair of the Radboud Prostate MR-Reference Center of Radboud University Medical Center, the Netherlands.

To meet the demand in the Netherlands and other countries, Dr. Barentsz’s center offers a two-week intensive course to technicians and radiologists that features one-on-one training. But more training is needed in Europe and North America.

“More and more hands-on training is needed. We need to establish centers of excellence where there is a guaranteed high quality of mpMRI of the prostate. These centers then can educate others,” said Dr. Barentsz, co-chair of the American College of Radiology PI-RADS Steering Committee and chair of the European Society of Urogenital Radiology Prostate MRI Subcommittee that developed the guidelines.

If attendance at the hands-on prostrate MRI course at RSNA 2016 is any indication, the desire for training is high. As co-organizer of the course, Dr Barentsz said the room exceeded its capacity of 100 participants the first day. The next three days, eager participants lined up outside the room an hour before class to claim a seat for the course, which focused mainly on PI-RADS v2, a tool to standardize interpretation and systematic reporting of mpMRI. The course, organized by Dr. Barentsz and a team of international experts, will be offered again at RSNA 2017. 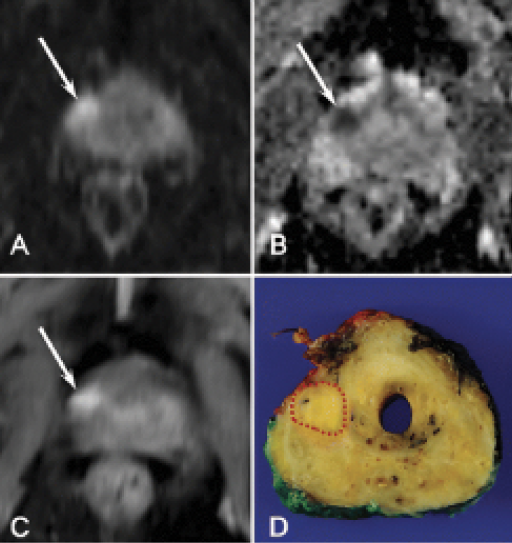 Images in a 74-year-old man with clinically significant prostate cancer. A, DW image and, B,ADC map show a focal area of diffusion restriction, measuring 1.1 cm in the longest diameter, in the right peripheral zone (arrow). The PI-RADS version 2 score of the ADC map was 4 according to both readers. C, DCE image also shows a focal area of early enhancement at the same site. The PI-RADS score of DCE imaging was positive according to both readers. Therefore, the overall PI-RADS score according to both readers was 4, which is suggestive of a high probability of clinically significant cancer. D, On the surgical specimen, clinically significant cancer (Gleason score = 7; tumor volume = 1.4 cm3; no extracapsular extension) is seen in the right peripheral zone (red dotted area). ©RSNA 2016. All rights reserved. Printed with permission 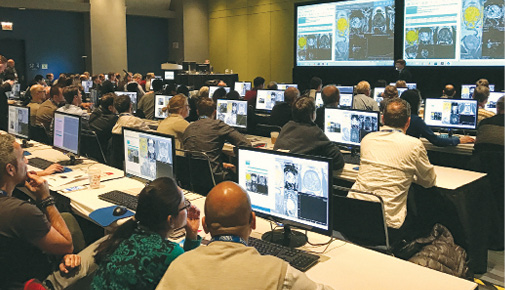 The demand continues for PI-RADs v2 training. Above: a prostate MRI session at RSNA 2016 drew a capacity crowd.