QIBA® Expands at RSNA 2016 and Internationally

The push to develop quantitative imaging biomarkers has gained momentum in recent years thanks to an expandingand increasingly international alliance of researchers, industry partners and other stakeholders.

RSNA has had a critical role in that expansion through its Quantitative Imaging Biomarker Alliance (QIBA®), which has grown considerably since forming in 2007 with the goal of advancing quantitative imaging and the use of imaging biomarkers in clinical trials and clinical practice.

The growth is also reflected at the RSNA annual meeting, where QIBA hosts a kiosk (see sidebar, next page) and a mid-week working meeting that last year was attended by more than 150 key researchers from around the globe.

Quantitative imaging refers to the extraction of quantifiable features from medical images for assessment of disease, injury or chronic conditions. Clinical radiology has been slow to embrace advanced quantitative measures. A 2012 study from Vanderbilt University found that only two percent of 761 CT and MRI reports contained an advanced quantitative metric, defined as a “numerical parameter reporting on lesion function or composition, excluding simple size and distance measurements.”

“Over the history of radiology, quantitative measurs have not been commonly reported, despite the fact that quantitative imaging can provide a consistent measure of a patient’s disease and response to treatment over time,” said QIBA Chair Edward F. Jackson, PhD, chair of the Department of Medical Physics at the University of Wisconsin School of Medicine and Public Health in Madison.

Daniel C. Sullivan, MD, Dr. Jackson’s predecessor as QIBA chair, first brought the idea of forming QIBA to RSNA while working at the National Institutes of Health, where in the late 1990s attention was shifting to perzonalized medicine — now also known as precision medicine.

“We knew that if radiology was going to be relevant in precision medicine, the results from imaging scans had to be more quantitative,” Dr. Sullivan recalled.

With support from the RSNA and the National Institute of Biomedical Imaging and Bioengineering (NIBIB), the alliance grew swiftly, from approximately 50 people and three committees in 2007 to more than 800 participants and 12 Biomarker Committees today.

Further evidence of QIBA’s expansion can be found in industry support, which was initially lukewarm, according to Dr. Jackson, but grew over time.

“Now there is strong interest and increasing participation in QIBA committees from representatives of device vendors,” Dr. Jackson said. “Recently, we presented an update on QIBA to NIBIB leadership and representatives were there from radiology, oncology, imaging device manufacturers, image analysis software companies, imaging contract research organizations and regulatory agencies.”

As QIBA has grown, it has inspired the formation of similar groups outside of North America. A formal collaboration between QIBA and the European Society of Radiology (ESR) was achieved through the establishment of a European Imaging Biomarker Alliance (EIBALL) subcommittee of the ESR Research Committee.

Japanese radiology leaders are crafting their own alliance based on QIBA structure and processes. A special QIBA symposium was held in April 2016 at the 75th Annual Meeting of the Japan Radiological Society (JRS), where Dr. Jackson was joined by Kevin O’Donnell, senior manager at Toshiba Medical Research Institute USA and chair of QIBA’s Process Committee.

“QIBA reflects a need for systems to integrate standards better,” said O’Donnell, who worked in Japan for five years. “The Japanese researchers were seeing a similar chasm and were interested to see what QIBA is doing to bridge that gap.”

“It’s important to have something quantitative that can help us categorize disease as mild, moderate or severe,” O’Donnell said. “These biomarkers can also guide whether or not to treat and if so, how aggressively, and evaluate the success of different treatments.”

The biomarkers under study are expected to improve upon existing criteria like the Response Evaluation Criteria in Solid Tumors (RECIST) technique, which involves formalized rules for measuring single-dimension tumor response using x-ray, CT or MRI.

“Each of the quantitative imaging biomarkers we are addressing goes beyond what RECIST measurements can assess,” Dr. Jackson said. “Functional methods like diffusion MRI or FDG-PET can assess changes that occur much earlier than changes in lesion size or volume.”

The QIBA committees focus on developing Profiles — documents used to organize and record the results of collaborative work by QIBA members. A QIBA Profile includes one or more performance claims that tell users what quantitative results can be achieved. For instance, the performance claim for CT volumetry states that a measured volume change of more than 30 percent for a tumor provides at least a 95 percent probability that there is a true volume change.

“When you send blood samples out, the labs are certified, there are quality control procedures in place and the numbers generated are reliable and consistent,” O’Donnell said. “In imaging, we’re aspiring to achieve the same kind of system.”

To be included under the QIBA umbrella, imaging biomarkers must satisfy five criteria: they must be transformative, translational, feasible, practical and collaborative. The QIBA Profile advances through several steps including a public release and comment period followed by agreement on a consensus version. The Profile requirements must then be successfully implemented in at least two different centers and on two different platforms in order to be considered Technically Confirmed. The Profile can then be demonstrated to achieve the Claim Confirmed stage through small-scale studies by at least two different groups.

“The chief obstacle to the translation of QIBA efforts to clinical care is the last step of the process,” Dr. Jackson said. “That’s where it becomes challenging, because the funds we have are insufficient for the necessary clnical trials and can’t currently be used for human subject studies.”

QIBA leaders agree that the dissemination and implementation of quantitative measures in the clinical area will be vital to their mission’s success in the future.

“Radiology tends to be conservative, with groups that are slow to change until either they’re pressured by consumers or they see compelling data,” Dr. Sullivan said. “It takes time to develop clinical data and for referring physicians to become aware of it.”

“The engine is running, but right now I can’t predict when we’ll cross the finish line,” Dr. Jackson added. 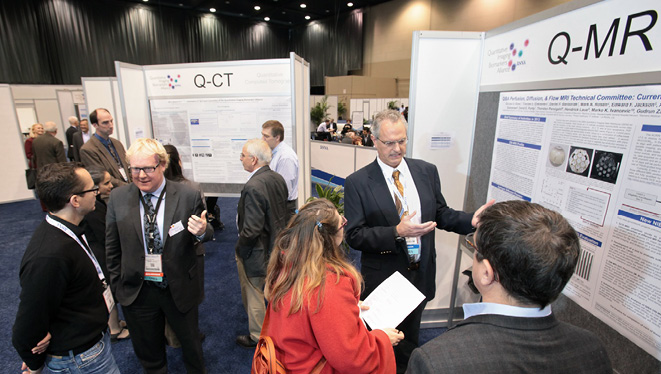 Attendees are invited to drop by the QIBA Kiosk at RSNA 2016 to learn about QIBA activities and projects and meet colleagues.
Editor's Picks