Those increases were in line with the 3.1 percent average increase experienced by physicians across the board, according to AMGA, which received survey responses from 260 medical groups representing 92,000 providers across a variety of specialties.

Although salary increases were relatively flat, radiologists remain one of the most highly compensated specialties, ranking behind only cardiothoracic surgery ($645,112), cardiology/cath lab ($584,118), orthopedic surgery ($582,056), and gastroenterology ($505,194) in terms of median salary, the survey shows.

Experts caution against reading too much into the numbers considering the rate of change within the healthcare environment.

“Dramatic changes can occur from year to year based on the way Medicare bundles codes and the way they compensate,” said Howard Forman, MD, professor of diagnostic radiology and biomedical imaging at Yale University. “This year’s increase may be a slowed increase, but it’s still an increase. And in particular, interventional radiology compensation growth rates are still robust.”

It is also important to remember that results are based on relatively small sample sizes. For example, just 460 interventional radiologists responded to questions about compensation.

“That’s a very small sample when you think of the size of interventional radiology across the nation,” said Dr. Forman, who directs the healthcare management program in the Yale School of Public Health and teaches healthcare economics at Yale University.

While compensation for radiologists — particularly diagnostic radiologists — is growing slowly, productivity, represented by relative value units (RVUs), is rising at a faster rate. In 2015, RVUs increased by 3.5 percent overall in radiology, the survey shows.

And in fact, RVU rates have been outpacing radiology compensation since 2012.

Over the past four years, the AMGA survey has shown that compensation for non-interventional radiologists has increased by 8.2 percent while RVUs have increased by 12.9 percent over the same time period.

“These numbers show that radiology’s productivity and efficiency are definitely increasing,” said Yuri Peterkin, MD, chief radiology resident at Winthrop-University Hospital in Mineola, New York, who presented research on RVUs in radiology at RSNA 2015 and has authored numerous articles on radiology reimbursement. “But productivity is increasing at a much faster pace.”

Nevertheless, Dr. Forman sees a good deal of potential for radiology in these numbers.

“The RVU numbers show that radiology has a far, far greater ability to grow productivity than a lot of other fields,” Dr. Forman said.

For example, internal medicine RVUs have increased by just 3.6 percent since 2012, while pediatric RVUs have actually decreased. Dr. Forman noted that even a field like general cardiology, which like radiology is heavily based on procedures, experienced just a 3.7 percent increase in RVUs since 2012.

Radiology on an Upward Trajectory

In terms of radiology’s future, Dr. Peterkin believes that while downward pressure on compensation will likely continue, radiology will continue to thrive because it is such a rapidly evolving, dynamic field. But he urges radiologists to embrace awareness and action — particularly concerning RVUs — as the specialty transitions to a pay-for-performance model.

“Radiologists need to be aware of and understand the RVU system, which will help them better understand their current productivity and reimbursement,” Dr. Peterkin said.

Dr. Forman said that he is quite optimistic about the future of the specialty on a number of fronts.

“Radiology will continue to be one of the greatest beneficiaries of productivity gains,” he said. “We have mastered the art of continuing to grow real productivity that’s not making the radiologist work more hours in the day, or days in the week, but rather have more productive hours when we are working.”

Technology such as machine learning and artificial intelligence will further facilitate a radiologist’s ability to interpret images and be more efficient in reporting and communicating findings, he said.

“So we might continue to face challenges in the sense that our reimbursements will continue to be cut,” Dr. Forman said. “And we’ll continue to have to make the case we are adding value to the system and should be compensated appropriately. But, I think the trends for radiology continue to be stronger than many people seem to believe.”

Study: Women Radiologists Earn as Much as Male Colleagues

Not only is radiology a highly-compensated profession, but the specialty ranks as one of the few — if not only — medical specialties in which female practitioners earn as much as their male counterparts.

At least that’s the conclusion of a recent analysis of salary differences by sex in U.S. public medical schools. The study, published in the August, 2016 issue of JAMA Internal Medicine, determined that radiology was the only specialty in which women’s salaries were comparable to men’s.

However, radiology bucked that trend. Results show that mean salaries for women (after multivariable adjustment) not only meet but actually surpass those of men ($285,127 compared to $282,749).

So why has radiology succeeded where other specialties have failed?

“I think this is really an open question and a source of potential remedies for other fields,” Dr. Jena said. “In a prior paper in JAMA, my colleagues and I found that female radiologists are equally likely as male radiologists to hold the rank of full professor, which was not the case in the majority of other specialties. More radiology-specific research is needed to identify why gender differences in promotion and compensation appear to be non-existent in radiology.”

Lucy Spalluto, MD, assistant professor of radiology and radiological sciences, Vanderbilt University Medical Center, co-director of the university’s Women in Radiology initiative, pointed out that there has been a strong movement in radiology to promote diversity, equity and inclusion.

“This includes the efforts of many individuals and groups such as the ACR Commission for Women and General Diversity and the American Association for Women Radiologists,” said Dr. Spalluto, who is also associate director for Diversity, Equity and Inclusion for the Department of Radiology at Vanderbilt.

While the results of the study are encouraging, Dr. Spalluto cautioned that the study focused only on public university medical schools and not on private academic institutions or private practices.

“Additionally, the salary information obtained focuses on base pay,” Dr. Spalluto said. “There may be a large discrepancy not accounted for in the supplemental or bonus salaries often associated with higher rank faculty positions and leadership positions, the very types of positions in which women in radiology remain grossly underrepresented.”

Still, the study is promising for women in radiology, Dr. Spalluto said. “This research suggests that women are beginning to approach salary parity in radiology. And by doing so, we can serve as a model for success for other specialties.” 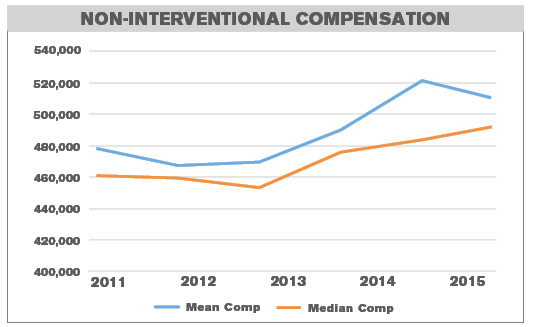 Radiology compensation increases in 2015 were in line with the 3.1 percent average increase experienced by physicians across the board, according to AMGA. Compensation levels for non-interventional radiology increased by 1.4 percent from $483,660 in 2014 to $490,399 in 2015 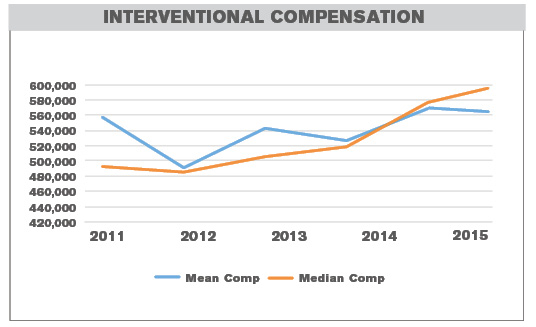 Meanwhile, median compensation rate for interventional radiology increased by about 2.7 percent, rising from $577,250 in 2014 to $592,750 in 2015. Charts courtesy of the American Medical Group Association (AMGA)
Editor's Picks