Finding new ways to foster a sense of com­munity among RSNA trainee members was the key issue discussed during the RSNA Resident and Fellow Committee (RFC) meeting in April. The committee also discussed ways to use RSNA social media to reach out to trainees.

“Our members greatly value network­ing and opportunities to build life-long friendships with other trainees across the country,” said Nancy J. Benedetti, MD, the RFC chair and a neuroradiologist at Radiology Imaging Associates, Englewood, Colo., during the meeting held at RSNA headquarters in Oak Brook, Ill. “The RFC is brainstorming ways to increase trainee engagement and to foster a sense of com­munity throughout the year.”

Networking will also be central to the RSNA 2016 Resident and Fellow Symposium, which will include a variety of sessions on career and professional development topics of interest to trainees. The symposium luncheon, held between the morning and afternoon symposium sessions, will bring together trainees and practicing radiologists.

This year’s symposium (See sidebar) will focus on a variety of issues including financial planning, a topic of great interest to trainees.

“The millennial generation of doctors is working hard to empower themselves with the tools and knowledge for financial success,” Dr. Benedetti said. “The Resi­dent and Fellow Symposium is one plat­form that RSNA uses to deliver content important to trainees, particularly career and financial planning topics that are not taught in most training programs.”

The committee also discussed how they could help trainees become and stay engaged with RSNA after they transition to the next stage of their radiology careers.

The RFC would like residents and fellows to build on those numbers and help spread the word on topics of interest by liking, sharing or retweeting RSNA posts.

“We want to engage our trainees and use social media as a tool to disseminate useful infor­mation,” said Courtney M. Tomblinson, MD, RFC Social Media Subcommittee Chair and a radiology resident at the Mayo Clinic Hospital in Phoenix. “That could mean opportunities that are available through RSNA to make information readily available for such things as deadlines for abstracts, grant applications or trainee leadership opportunities.”

Dr. Tomblinson served as a Social Media Superuser member during a panel at the Amer­ican Society of Neuroradiology annual meeting in May in Washington, D.C. She uses multiple social media platforms, but primarily uses Twitter as an educational tool by curating information and stimulating discussion within her future field of neuroradiology.

“There are so many options available to allow users to select a platform based on what they hope to achieve from it — each one has a some­what unique reach and interaction,” Dr. Tomb­linson said.

The committee also shared examples of con­tent that would be of interest to their peers and discussed using social media tools such as Tweet chats and sharing content links and news stories.

“Social media is such a powerful platform for sharing knowledge and stimulating creative think­ing, as well as for networking,” Dr. Tomblinson said. “As trainees, we are in this interesting posi­tion of trying to develop a professional presence by engaging in dynamic discussion of topics that will affect us soon after we leave training, and social media is a means for accomplishing that.”

Reviews are positive after the first year of the RSNA Radiology Resident Representative (R3) program that serves as a bridge between RSNA and residents’ respective institutions.

The representatives serve as a local resource and point of contact to help educate residents about the full range of services and resources provided by RSNA and to encourage continuing involvement with RSNA both as trainees and beyond.

When the program was launched, the RFC emailed the 180 residency program directors across the U.S. asking them to nominate candi­dates. The response was impressive — 101 insti­tutions joined the program.

“We have had excellent participation across the country,” said Daniel I. Glazer, MD, chair of the RFC Communications Subcommittee, as of July 1, a radiologist at Brigham and Women’s Hos­pital, director of abdominal and pelvic CT, and an instructor of radiology at Harvard Medical School, Boston. “Our next step is deciding the optimal way to utilize these representatives and how best to incorporate them into the overall communications strategy of the RFC. The goal is to continue increasing resident engagement and resident retention.”

Another initiative already implemented involved sending emails to R3s that highlight RSNA offerings geared toward trainees. Prior to last year’s RSNA annual meeting, the committee sent out information on resident-specific courses and details of the meeting, and also publicized the new trainee stipend available for accepted abstracts.

The committee considered other ideas for similar messaging, such as reminding residents of the study offerings available through RadioGraph­ics and the RSNA physics modules prior to the American Board of Radiology examinations.

Dr. Glazer said another benefit of the program is that information flows both ways.

“We can provide a lot of information about what RSNA has to offer, and we can then get a lot of feedback from individual R3s relating to anything we do. It’s a great resource,” he said.

Another round of emails was sent to the 180 program directors to solicit participants for the next year. As familiarity with the program grows, the number of participating institutions will grow in turn, Dr. Glazer said.

The RSNA Resident and Fellow Symposium will be held Tuesday, Nov. 29, during RSNA 2016. Attendees must be registered for RSNA 2016. Go to RSNA.org/Register. 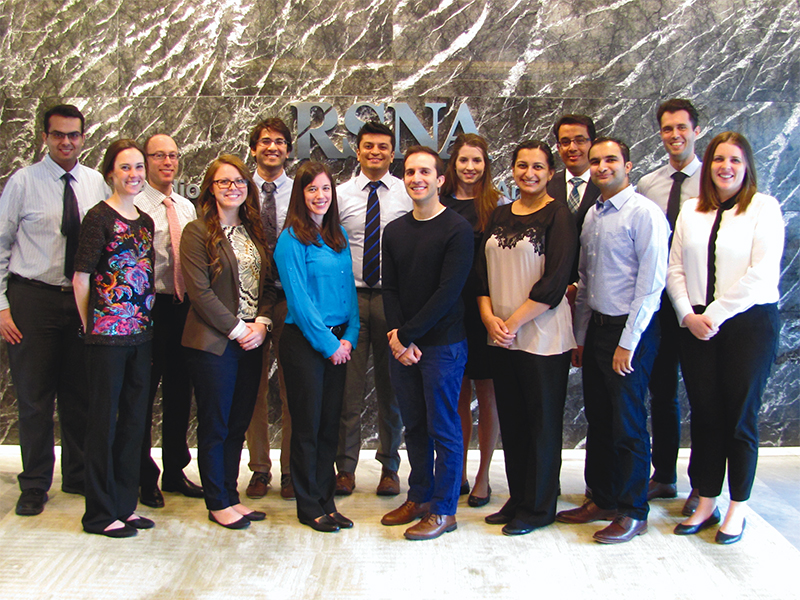 The RSNA Resident and Fellow Committee (RFC), met at RSNA headquarters in Oak Brook, Ill., in April to discuss issues including social media, networking opportunities and progress of the first year of the RSNA Radiology Resident Representative (R3) program.