Patients with isolated small brain hemorrhages may not benefit from the repeat head CT scans that are now the treatment norm for any intracranial hemorrhage, according to a study presented at RSNA 2015.

Only three out of 90 patients studied had any increase in bleeding evident on follow-up CT, and all three had impaired clotting ability, due to either medications or underlying blood conditions. For the other patients, the hemorrhages either were stable or decreased in size on a follow-up scan.

“Nothing much happens to these patients—they stay the same,” said radiology resident Kavi Devulapalli, M.D., who presented the findings. If they are confirmed by additional studies, Dr. Devulapalli said the standard of care may—and should—shift to doing follow-up CT scans only on patients who have issues with anticoagulation. The presence of intracranial hemorrhage might prompt starting the patient on an anti-seizure medication or changing their anticoagulant medication, but follow-up CT might not be worth the time, expense or extra radiation exposure for the patient, he said.

The study examined images from all patients presenting to UCSF’s Level 1 trauma center from January 2013 through March 2015 undergoing initial and short-term follow-up head CT with initial findings positive for isolated subdural hemorrhages along the falx and/or tentorium. Patients with penetrating trauma, other sites of intracranial hemorrhage, brain contusion or depressed skull fractures were excluded. An electronic health record review provided information including gender, age and history of anticoagulation.

A second study looked at whether midline subarachnoid hemorrhages detected on CT could predict severe diffuse axonal injury and be used as a marker for referring patients for follow-up MRI. The study received a 2015 RSNA Trainee Research Prize.

Researchers studied 270 head trauma patients who underwent CT within 24 hours and MRI within 30 days. Six CT findings were studied as potential predictors of DAI: status of basal cistern, status of midline shift, epidural hematoma, IVH, SAH, and volume of hemorrhagic mass. The SAH findings were further analyzed based on six locations, two of which, interhemispheric and perimesencephalic, were classified as midline. Based on MRI results, the patients were divided in two groups: DAI present (77 patients) and DAI absent (193 patients).

While the finding may not be strong enough to change the overall utilization of follow-up MRI for patients without midline SAH, especially when MRI capabilities are in the same building or nearby, Dr. Mbemba said it could potentially serve as a useful screening indicator in locations where obtaining a follow-up MRI might entail transferring an unstable patient to a distant location. 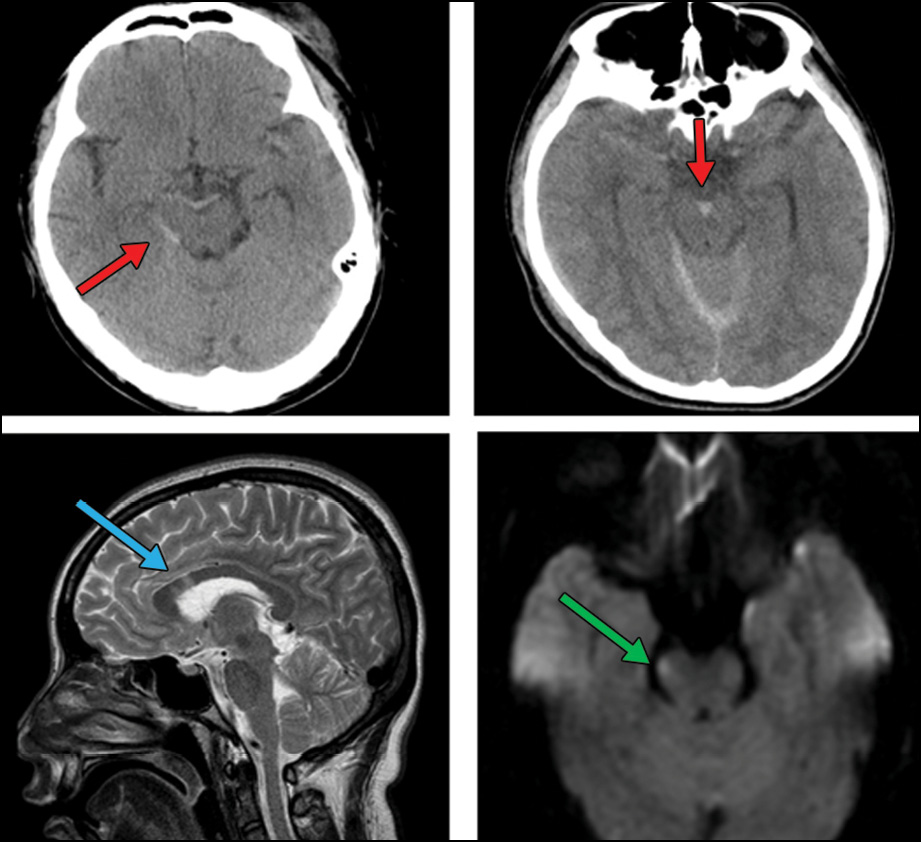 An image from Dr. Mbemba's research showing the initial CT performed 50 minutes after onset showed the presence of midline (perimesencephalic) subarachnoid hemorrhage (red arrows), which predicted the presence of severe DAI [DAI located in the corpus callosum (blue arrow) or in the brainstem (green arrow)] as shown on subsequent MRI performed 3 days later.