RSNA 2015 researchers study the evolution of polyps with CT colonography

Studying the natural evolution of medium-sized polyps with volumetric measurements instead of linear measurements might better inform the management of these polyps, in particular determining whether surveillance or colonoscopy should be recommended, according to research from the University of Amsterdam presented at RSNA 2015.

“Previous literature showed a 3-6.6 percent chance of harboring advanced histology for medium-sized (6-9 mm) polyps, but little is known about their natural course,” said presenter Charlotte Tutein Nolthenius, M.D., of the Department of Radiology at the Academic Medical Center of the University of Amsterdam. "CTC is probably the best method for determining longitudinal growth of these polyps, because we leave them in place allowing a reproducible localization and measurement," she added.

The study looked at 70 participants who had one or two 6-9 mm polyps at primary screening CTC and received surveillance CTC after three years. Those who still had lesions 6 mm or larger were offered colonoscopy and polypectomy. Semi-automated volumetric measurements were performed at both CTCs, and mean volume was calculated for prone and supine volume measurements.

No polyps progressed to colorectal cancers or adenomas with high-grade dysplasia during the surveillance interval.

A separate study looked at how well CT colonography compares with colonoscopy at detecting cancers.

A team from Bristol, England, found that the sensitivity of CTC was 98.9 percent in almost 5,000 patients screened during the study period, which slightly exceeded the performance of CTC in other published studies. Only five cancers were missed by CTC, and three of them were also not visible on follow-up scans post-diagnosis.

The sample included 198 patients with a diagnosis of colorectal carcinoma entered into the cancer registry between January 2010 and January 2015 who had had a CTC before being diagnosed. These patients represented about four percent of the total number of patients screened with CTC.

The two missed cancers had specific characteristics that made them difficult to spot on CTC, said presenter David Little, M.B.Ch.B. Lesions that are flat, close to the ileocaecal valve, ulcerated, or hidden by a complex fold are more likely to be missed on CTC, he said. Both patients were treated and are currently cancer-free.

Dr. Little said the research team plans to follow the patients in the study until 2018. 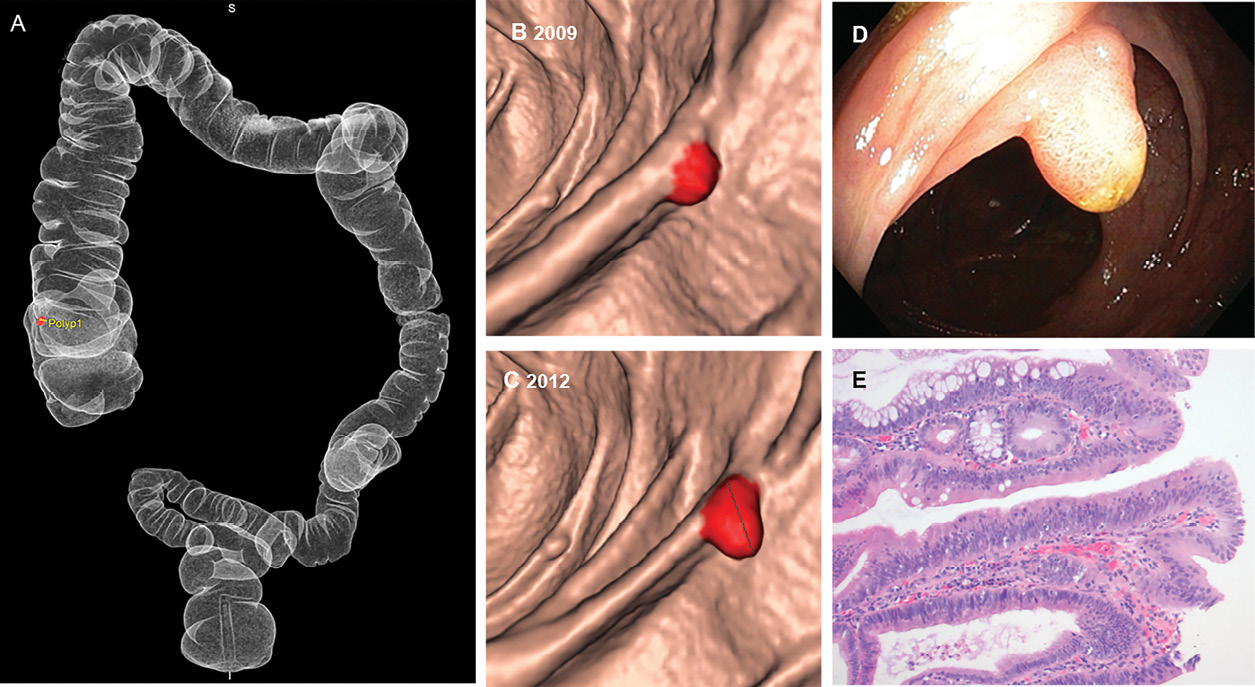 An image from Dr. Nolthenius' research showing progressing advanced adenoma. Sessile polyp in the ascending colon on 3-D images (A), measuring 104.1 mm3 in volume on index CT colonography in 2009 (B). After a surveillance period of 3.1 years volume (205.1 mm3) had increased (C). After endoscopical removal (D) histopathological analysis revealed a tubulovillous adenoma  with low-grade dysplasia (x100 magnification and H&E stained section) (E). On both 3-D images is a small sessile polyp (5 mm) visible in the background which was not included in this study as it was <6mm.