As imaging technology advances, so does the role of radiology in treating athletes at Olympic Games — including at the 2016 Summer Olympics

While spectators around the world were treated to thrilling competition at the Summer Olympics in Rio de Janeiro, Brazil, some of the most critical moments took place away from the spotlight where scores of volunteer radiologists and technologists brought advanced imaging technology to injured athletes.

Throughout the Olympics, the imaging suite was one of busiest areas of the Polyclinic, a 3,500-square-meter healthcare facility located in the middle of the Olympic Village. During the games, 1,540 imaging studies were performed over the 16 days, including 469 x-rays, 893 MRIs and 178 ultrasound exams. Imaging of the knees, lumbar spine, ankles and shoulders were most common.

“Seeing the state-of-the-art equipment at the Polyclinic gave the athletes and medical staff fantastic confidence,” said Richard Budgett, MD, medical and scientific director of the International Olympic Committee (IOC). “The team doctors have come to rely considerably on radiologists and they were really impressed with what was accomplished.”

Work began in earnest on the Polyclinic in 2009 after Rio de Janeiro became the first South American city ever to be selected to host the Olympic Games. General Electric (GE), an IOC sponsor, worked closely with Brazilian authorities to coordinate delivery of the imaging equipment and pave the way for the use of electronic medical records (EMRs), which had never been used before at the Olympics.

“It took a lot of work by a lot of people to get the Polyclinic going,” Dr. Budgett said. “There were more than 3,000 staff members coming to work twice daily during training.”

Athletes with painful muscles and joints crowded the Polyclinic during the games. As is often the case, some memorable Olympic moments involved injuries, such as when French gymnast Samir Ait Said broke his leg during a vault, or when American Abbey D’Agostino limped to the finish after stopping to help New Zealand runner Nikki Hamblin get up after a fall during a 5,000-meter heat. Athletes with more serious injuries were transported to the hospital, while others were taken to the Polyclinic. Care for the injured athletes required close coordination among international federation doctors, team doctors and ambulance staff.

“It was like working in a goldfish bowl,” Dr. Budgett recalled. “You’re in a situation where everyone watching the games knows about the injuries, and you have to make sure there’s a chain of communication so that the right people are informed immediately.”

The technology used at Rio 2016 exemplifies the rapid evolution of sports imaging over the past three decades, according to Dr. Budgett, who has a unique perspective on the issue.

Dr. Budgett — who earned a gold medal for rowing for the United Kingdom at the 1984 Olympic Games in Los Angeles — was named British team doctor at the 1992 Winter Games in Albertville, France.

“In those days, things were done on a much smaller scale,” he remembered. “We had one x-ray machine, no ultrasound and MRI was done offsite.”

In the 2006 Olympic Games in Torino, Italy, GE provided Dr. Budgett with an ultrasound scanner, a harbinger of the increasingly important role the technology would play in future games.

At the 2016 Olympics, GE’s Vscan, a portable ultrasound tool the size of a smart phone, was often the first step in imaging injured athletes. Those with more complex injuries or indeterminate findings would then be turned over to the specialist radiologists in the Polyclinic offering more sophisticated ultrasound, MRI, CT and x-ray equipment.

“We were able to use individualized protocols to optimize scans,” Dr. Budgett said. “We had the best machines and some of the best musculoskeletal radiologists in Brazil there to interpret the scans.”

One of those radiologists, Rômulo Côrtes Domingues, MD, who chose the team of radiologists and volunteer technicians, said the team’s work was critical to athletes at the games.

“Musculoskeletal radiology is of the utmost importance because the majority of injuries related to the athletes come from the musculoskeletal system: bones, tendons, muscles, cartilages, ligaments, menisci, labra and nerves,” Dr. Domingues said. “In such cases, we gave a prompt report enabling the delegation of doctors to decide upon the best conduct.”

The use of EMRs also had a dramatic impact on care at the games by enabling physicians to connect the diagnosis and treatment of all Olympians while providing a digital record to enhance their post-game medical care.

“Through EMRs, doctors tracked thousands of data points on each athlete, analyzed that data in near real-time and coordinated care with providers from all over,” said Daurio Speranzini Jr., MBA, who heads Latin American operations for GE Healthcare. “The digital solution permitted reliable information and helped to ensure the exact medical history of each athlete.”

The use of EMRs is expected to have a major impact on the Olympic Games going forward, according to Dr. Budgett, who competed at a time when health information about athletes was jotted down on cards or pieces of paper — if it was recorded at all.

Today, EMRs provide longitudinal surveillance of athletes, helping to predict what injuries and illnesses are most common over time while making it easier for multidisciplinary teams, including radiologists, orthopedic specialists and other healthcare workers, to share information.

For instance, surgeries for the U.S. Women’s Olympic wrestling team were reduced by 60 percent after EMRs were adopted, according to the U.S. Olympic Committee (USOC). Officials attributed the reduction in part to the ability of EMRs to translate data into insights and identify trends that can inform changes in training and care.

“Athletes have benefited from this solution, getting faster diagnoses and treatments and receiving more assertive handling that enabled their faster physical recoveries, along with increasing their chances of avoiding unnecessary procedures,” Speranzini said.

The IOC’s Medical and Scientific Commission is encouraging institutes, National Olympic Committees and squads to take up EMRs and use them throughout the four-year period between Olympic Games to monitor athletes and assess treatment effectiveness by different practitioners with the hope of preventing injury and illness from occurring.

An earlier version of an EMR developed specifically for the USOC was used successfully during the London 2012 and the Sochi 2014 Games. At the Sochi 2014 Paralympic Winter Games, an athlete suffered a brainstem injury after a fall in the snow, compromising his breathing. By the time the athlete arrived in Frankfurt, Germany, for additional care, he was not able to speak.

“When the medical team accessed his health record on the smart phone, they could verify that he had allergies, which would influence his treatment, and they could see the number of anticoagulants he had ingested,” Speranzini said.

The equipment used at the Polyclinic in the 2016 Summer Olympic was also used for the Paralympic Games held in September 2016. Rio 2016, the Brazilian nonprofit association that sponsored the games, is donating the equipment to hospitals in Brazil.

In addition, GE donated 24 pieces of equipment to Rio de Janeiro’s Souza Aguiar Municipal Hospital, one of the biggest emergency hospitals in Latin America and the main public trauma hospital in the city. The donation enabled hospital officials to replace some outdated imaging equipment with more advanced technology and provide a PACs for the renovated radiology clinic.

“This new medical equipment will bring speed and safety to patient care and increase by 30 percent the potential operations performed by the institution per month,” Speranzini said. 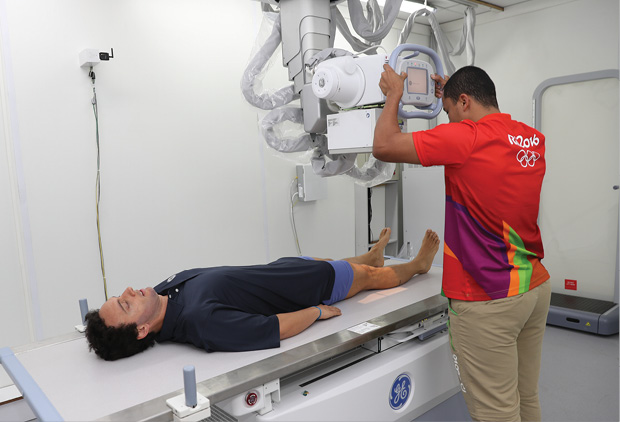 The Olympic Games Polyclinic (above) was equipped with the latest diagnostic imaging technologies as well as data and record management to help doctors treat and track athletes. Image courtesy of GE Communications. 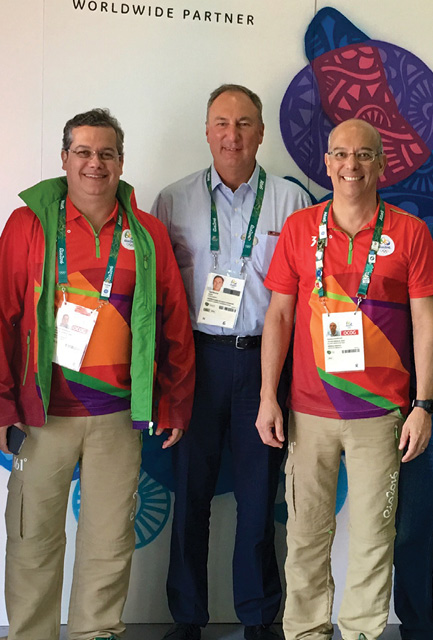