Given the overall lack of awareness many people have about the risks versus benefits of imaging exams, physicians should make deliberate efforts to hold discussions with their patients about their viewpoints of imaging procedures, according to another RSNA 2015 session.

"A lack of patients' knowledge regarding both medical imaging and use of radiation has the potential to harm patient cooperation and trust," said Leila Mostafavi, M.D., of the University of California, Los Angeles. "Ideally, information such as type of procedure and technique as well as potential risks and benefits of the imaging test, including risk related to radiation exposure and accuracy of the test, should be available to the referring physician and shared with their patients."

CT patients were more likely to know that CT utilized radiation (85 percent) as compared to those receiving other imaging procedures (43.5 percent). Most patients (84 percent) correctly stated that the X-ray imaging requires radiation.

Overall, the study showed that patients lack a general understanding of how much radiation they receive from cardiac CT and MRI. On average patients mistakenly associated MRI with the use of radiation and underestimated the amount of radiation associated with a cardiac CT.

To combat this knowledge deficit, doctors should start by making time to initiate discussions with patients about their perceptions of medical imaging, Dr. Mostafavi said. "As patients may not be forthright with their opinions or views, this physician-initiated discussion may be beneficial," she said.

Also, explaining radiation doses with common relatable measurements can reduce patient confusion, Dr. Mostafavi said. Participants in the study were asked to rate the amount of exposure on a radiation benchmark arranged on a logarithmic scale, with 1 being the highest dose and 5 being the lowest. The benchmarks were: 1) the limit for a radiation worker per year; 2) the average yearly background dose; 3) the average annual dose from food; 4) the dose from an airplane flight from Los Angeles to New York City; and 5) the extra dose from spending two days in Colorado.

Finally, there is a need for standardized information that can be distributed to patients, she said.

The good news, however, is that despite a low level of knowledge about radiation exposure, the majority of patients in the study indicated a high level of trust in the appropriateness of cardiac CT and MRI and in their physicians, Dr. Mostafavi said. For example, 73 percent agreed that radiation risk is acceptable when their physician recommends an exam and 79 percent believed the benefits from exams outweigh the risks associated with radiation.

Non-radiologist Physicians May be Uninformed

Radiologists might run into problems educating patients, however, if most communication is done through non-radiologist physicians, Dr. Mostafavi said. "Previous studies have shown that non-radiologist physicians are often relatively uninformed about the involvement of radiation for imaging tests—most specifically the dose and therefore the risk patients may be exposed to," she said.

Another challenge is that published data regarding radiation exposure is often confusing and undergoing rapid change, Dr. Mostafavi said. And referring physicians don't always know the type of equipment being used at referring hospitals. 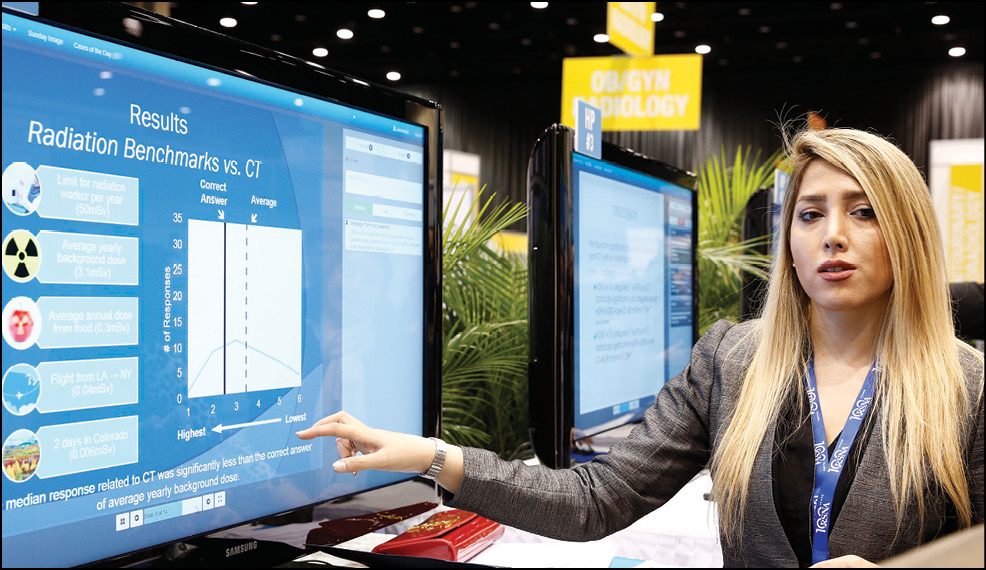