Two recent studies show the significant role imaging can potentially play in fighting obesity. In the first study, researchers demonstrated that gastric artery embolization may be a safe, less-invasive weight-loss technique for morbidly obese patients, potentially paving the way to a minimally invasive treatment for obesity that could be performed as an outpatient procedure.

“We think gastric artery embolization potentially can be a major treatment for obesity in the future,” said Mubin I. Syed, M.D., who presented the pilot study at RSNA 2015. “This procedure really can transform medicine.” Of the four patients who have undergone the procedure, one lost 48 pounds in a year, which was almost half of her excess body weight, said Dr. Syed, an interventional radiologist at Dayton Interventional Radiology in Dayton, Ohio. “This finding is equal to results typically offered by bariatric surgery, so this is a tremendous advancement,” he said.

Before the study, Dr. Syed confirmed that the Food and Drug Association (FDA) authorized a diabetic patient to undergo this procedure for the first time because of the link between morbid obesity and diabetes.

“We demonstrated that you can normalize or near-normalize blood-sugar levels as a result of this procedure, which is a huge achievement,” Dr. Syed said.

Dr. Syed conducted the Phase 1 Trial through an Investigational Device Exemption (IDE) from the FDA. The FDA approved the pilot study— the Gastric Artery Embolization Trial for Lessening Appetite Nonsurgically (GET LEAN)—for four morbidly obese patients with a body mass index of 40 or higher, who had failed previous attempts at weight loss through diet, exercise and behavior modification. He is seeking his fifth patient and expects to be allowed to increase the trial size.

Although only two of the four patients showed significant weight loss, Dr. Syed believes the procedure is promising because the two patients who did not lose weight withheld parts of their medical history that would have excluded them from the study. Dr. Syed said the experience taught him how to refine his screening procedure.

Some patients experienced nausea and stomach pain, but no symptoms required hospitalization, Dr. Syed said. He added that superficial ulcerations occur in the embolization area but they heal within 30 days and are an expected part of the procedure.

Embolization for Obesity is New

Interventional radiologists have performed gastric artery embolization for decades as a way to stop bleeding in emergency situations, but the idea of performing the procedure to treat obesity is new.

The embolization technique suppresses the production of ghrelin, a hormone that stimulates appetite, by limiting blood flow to the area. This technique is less invasive and less traumatic than laparoscopic sleeve gastrectomy, Dr. Syed said.

As opposed to surgically removing part of the stomach, the embolization technique only requires access via the radial artery. “That's a very safe access site even in a very obese patient,” he said. Dr. Syed said he accessed the left gastric artery through the arm instead of the groin because the patients' fatty tissue makes those arteries difficult to locate in the first place and to later put pressure on to stop any bleeding.

The pilot study used Beadblock 300-500 micron particles for the embolization. Dr. Syed said smaller beads, which were used in previous studies on animals, might be more effective but the sizes used in this study were as small as the FDA would approve.

Using another noninvasive imaging technique, researchers in the Netherlands linked heart failure with fatty liver in obese people, according to a study recently published online in Radiology. Non-alcoholic fatty liver disease (NAFLD), also known as hepatic steatosis, carries a prevalence of up to 30 percent in the general population and between 70 percent and 90 percent among those who are obese or have type 2 diabetes.

Ralph L. Widya, M.D., and colleagues from the Leiden University Medical Center in Leiden, the Netherlands, used proton MR spectroscopy to noninvasively measure hepatic triglyceride content and cardiac MRI to assess left ventricular (LV ) diastolic function in 714 men and women aged 45 to 65 years. Of the 714 patients, 44 percent were categorized as overweight, and 13 percent were classified as obese.

Results indicated that an increase in hepatic triglyceride content was associated with a decrease in mean LV diastolic function in the obese subgroup of the study population. The association between hepatic triglyceride content and LV diastolic function existed independently of the metabolic syndrome, suggesting that fatty liver itself could, at least in obese people, pose a risk of heart dysfunction above and beyond known cardiovascular risk factors that are clustered within the metabolic syndrome.

“Our results may be of importance in cardiovascular risk stratification in obesity, because there is a large variation in the degree of hepatic steatosis in obesity,” Dr. Widya said. “Also, more emphasis should be put on dietary interventions to reduce or prevent hepatic steatosis.”

Dr. Widya added that future research is required to study the effect of NAFLD on cardiovascular events and to investigate to what extent the association exists and differs among normal weight, overweight and obese persons.

“We are investigating the relationship of fatty liver and aortic pulse wave velocity and carotid intima media thickness as well in an even larger study sample,” Dr. Widya said. “Furthermore, we look forward to the follow-up results of the Netherlands Epidemiology of Obesity study to analyze incident cardiovascular events in relation to fatty liver and biomarkers.”

As the role of imaging in combating obesity continues to grow, radiologists will continue to face challenges specific to larger patients.

In terms of technology, radiologic services and equipment have yet to fully adapt to larger patients in many cases, said Mubin I. Syed, M.D. For example, the equipment in his practice, Dayton Interventional Radiology, Ohio, has table limits of 400 pounds, meaning radiologists are not able to image patients who weigh more than 400 pounds without purchasing new equipment.

And while CT works well with obese patients because the images allow better delineation of tissue and more contrast, obese patients require a higher dose of radiation to produce high-quality CT images. Patients who can’t fit into the gantry necessary to have the exam could pose another hindrance, and the gantry for MRI is even smaller than for CT.

Still, most MRI systems are taking patient comfort during the examination into account and are already being built with wider bores, said Ralph L. Widya, M.D. He said most systems are suitable for patients up to approximately 550 pounds.

“That makes MRI an ideal imaging modality to study obese patients,” said Dr. Widya, from the Leiden University Medical Center in Leiden, the Netherlands. “Moreover, MRI is preferred in the imaging of obesity because of the absence of radiation in contrast to CT.”

“Imaging will need to keep adapting to meet the needs of the morbidly obese as interventional radiologists continue to fight this major public health problem,” he said. 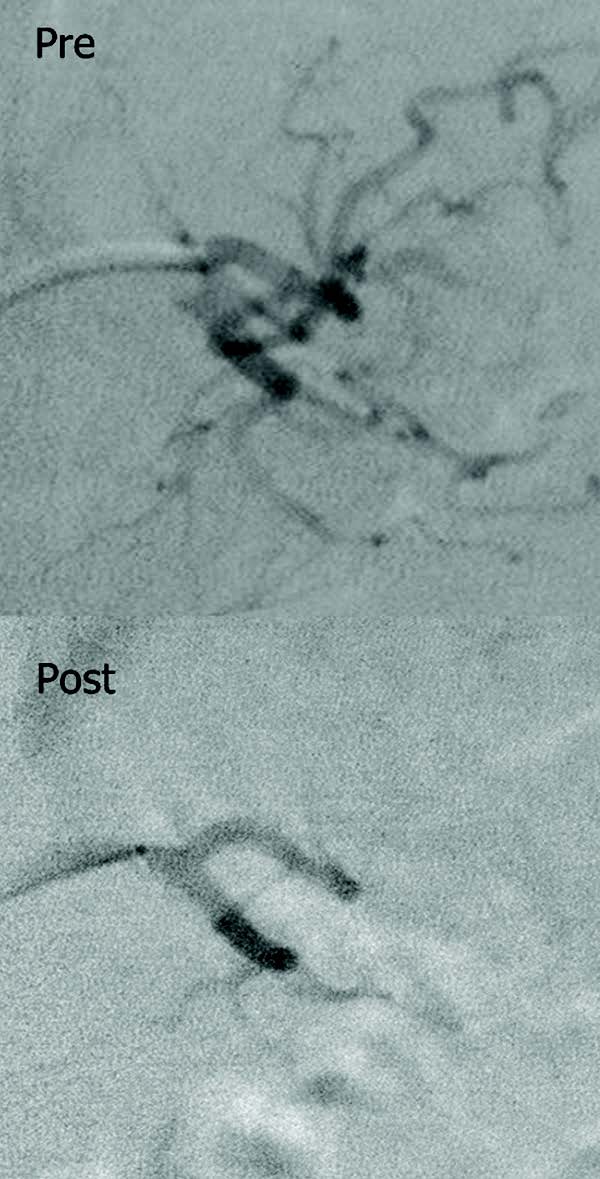 Pre-and post-bariatric embolization images of the main trunk of the left gastric artery in a morbidly obese diabetic patient. 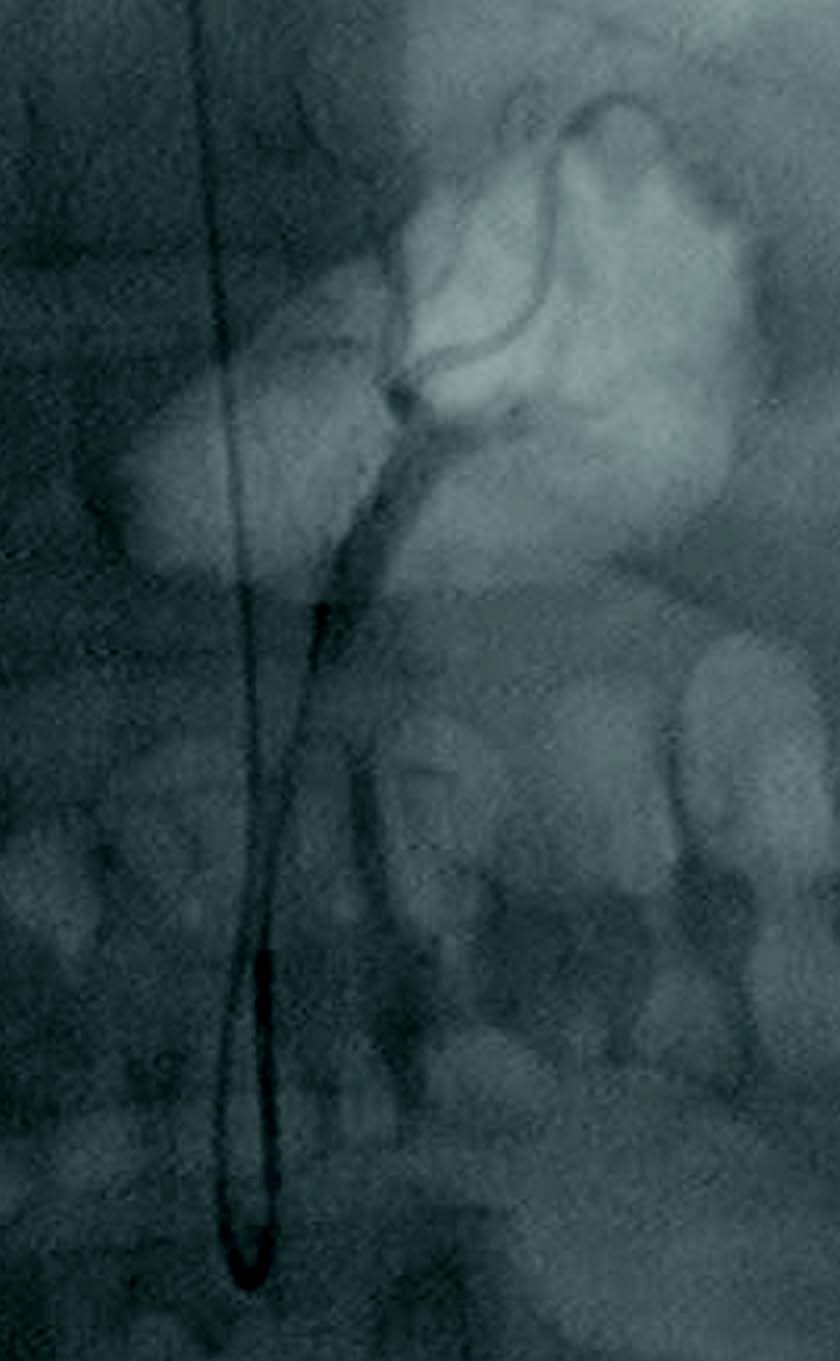 Embolization of the left gastric artery via radial artery approach in a morbidly obese patient. 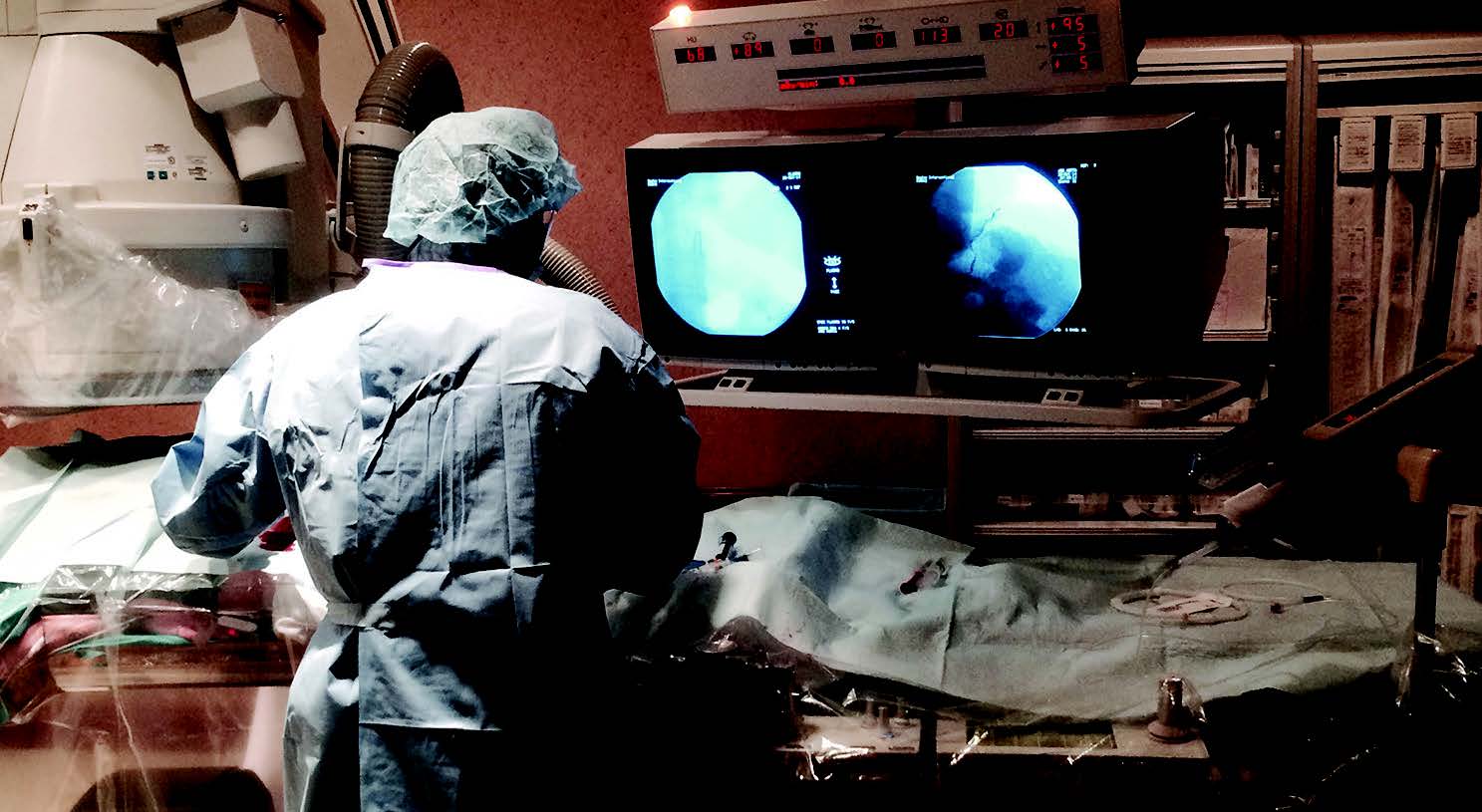 A doctor performing gastric artery embolization on a patient.