New studies using advanced imaging have shown how the brains of men and women respond differently to cigarette smoking and why some former smokers are more likely to relapse. The results suggest a role for imaging in helping develop personalized therapies for people addicted to smoking, researchers said.

Despite a recent decline in the smoking rate, tobacco use remains the single largest preventable cause of death and disease in the U.S., according to the Centers for Disease Control and Prevention. Cigarette smoking kills more than 480,000 Americans each year, and smoking-related illness in the U.S. costs more than $289 billion annually. In 2012, the most recent year for which statistics were available, an estimated 42.1 million U.S. adults were current cigarette smokers.

Smoking elicits brief bursts of dopamine, a neurotransmitter that plays a major role in addiction and is difficult to measure with standard imaging models, according to Evan D. Morris, Ph.D., an associate professor of diagnostic radiology, biomedical engineering and psychiatry at the Yale School of Medicine in New Haven, Conn., and senior author of the study published in the Dec. 10, 2014, online issue of the Journal of Neuroscience.

“Most techniques have been designed to look for a long-lasting, almost constant effect,” Dr. Morris said. “Clearly, what happens in smoking is brief and a new technique is needed to observe that activity.”

Working with his Yale colleague Kelly Cosgrove, Ph.D., associate professor of psychiatry, diagnostic radiology and neurobiology, Dr. Morris developed a technique that captures PET images once every three minutes and combines them in a kind of movie that shows the patterns of dopamine activation in the brain over time.

Yale researchers used the technique to examine the brains of eight male and eight female nicotine-dependent smokers. In observational studies, women and men report that they smoke for different reasons.

“Men are more sensitive to the nicotine level, while women tend to smoke out of habit and for mood stabilization and social reasons,” Dr. Morris said. “It stands to reason that their brains are doing something different.”

The subjects smoked cigarettes in the PET machine to capture what Dr. Morris called “quasi-naturalistic behavior.” “It was important to have the subjects smoking in the scanner, smoking their own brand of cigarette and smoking at their own pace,” he said. “In this case, we wanted to capture the behavior that was addictive to each individual.”

Once the subjects began smoking, stark differences emerged between the men and women. Smoking-induced dopamine activation occurred faster in the men and was most noticeable in an area of the brain called the right ventral striatum.

“The right ventral striatum is believed to be specifically involved in drug reinforcement and explains why people want to seek more drugs, distinct of other aspects of addiction like sight and smell,” Dr. Morris said.

A similarly rapid dopamine response was found only in women in a part of the dorsal striatum, a brain region important for habit formation. The findings provide paths for developing and testing gender-sensitive medications and other approaches for quitting smoking, Dr. Morris said.

“If our hypothesis pans out, then dopamine movies may help explain why nicotine-replacement therapies, such as nicotine patches, appear to be more effective for male smokers than for females,” he said.

Because the technique is ideally suited to study drugs that cause a brief response, it could have applications beyond smoking, Dr. Morris added.

Advanced imaging also played a central role in a recent study of smoking from the Perelman School of Medicine at the University of Pennsylvania in Philadelphia. The study, published in the January 7 online edition of Neuropsychopharmacology, explored the effects of brief abstinence from smoking on the brains of 80 smokers seeking treatment. Participants reported smoking more than 10 cigarettes a day for more than six months.

The researchers performed functional MRI (fMRI) immediately after a subject smoked and another 24 hours after abstinence began. They measured changes in the blood oxygen level-dependent (BOLD) signal, an MRI measure of regional differences in blood flow, from various areas of interest in the brain.

People in the relapse group also had reduced suppression of activation in the posterior cingulate cortex (PCC), a central part of the brain’s default mode network, which is active when a person is not focused on a specific task.

“PCC is part of the default mode network and is activated in response to task-irrelevant thoughts, so reduced suppression of activity in PCC would lead to relapse,” Dr. Lerman said.

As a prognostic marker for early smoking relapse, the combination of abstinence-induced decreases in left DLPFC activation and reduced suppression of PCC may represent an improvement over today’s clinical or behavioral tools, Dr. Lerman said. Examinations of this brain activity also could lead to improved personalized intervention strategies for smokers.

“These results help us to understand where to target new interventions designed for neuromodulation; that is, interventions like cognitive exercise training or brain stimulation that can alter regional brain activity,” Dr. Lerman said.

Evan D. Morris, Ph.D., and colleagues developed a technique that captures PET images once every three minutes and combines them in a kind of movie that shows the patterns of dopamine activation in the brain over time. Above, a dopamine movie (left) of one male smoker and one female smoker who both started smoking 45 minutes into the scan. 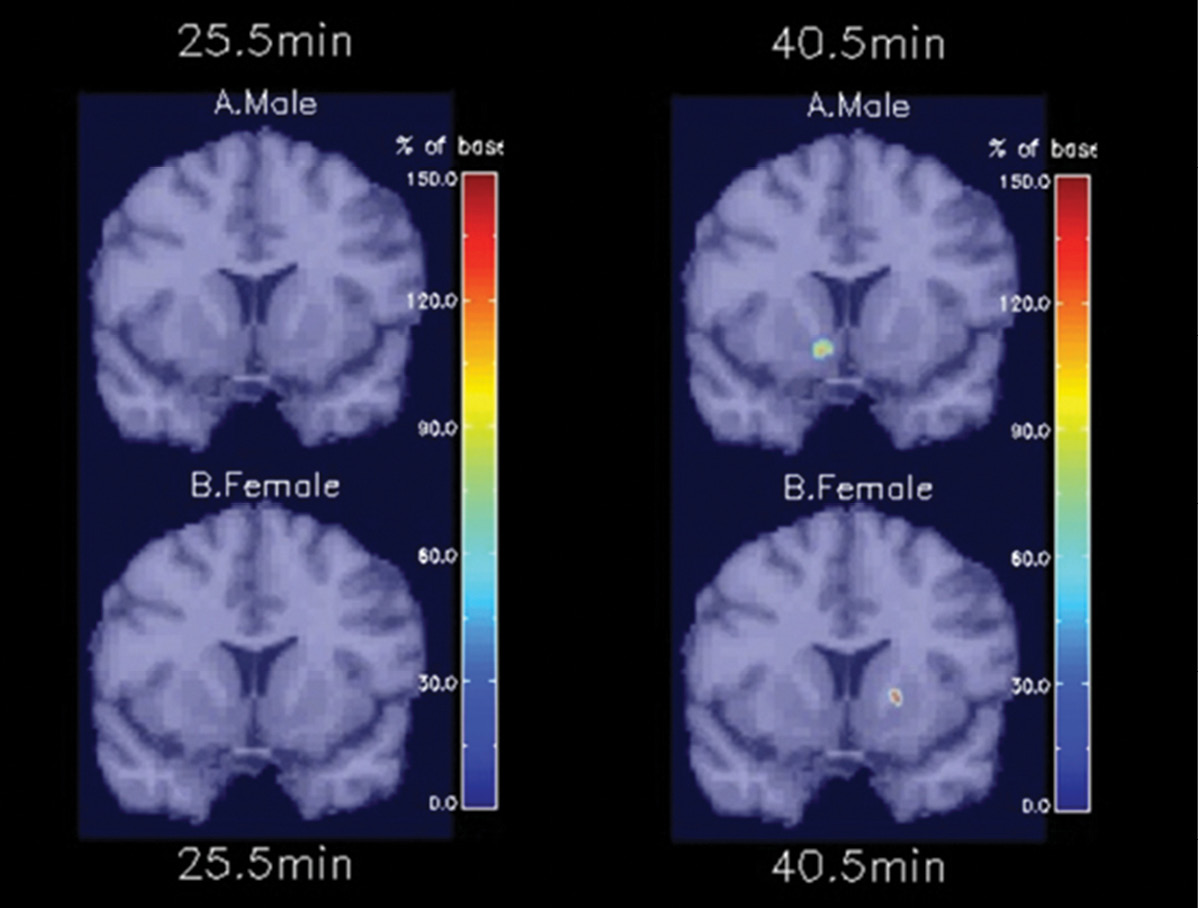 New research from Yale University shows that men and women respond to cigarettes differently, demonstrating that smoking-induced dopamine activation occurs in a different brain region and much faster in nicotine-dependent men than women. Left: The same four contiguous brain slices are shown for the male and the female. The dopamine level that changes over time is color-coded to represent the percentage elevation above the baseline level (prior to smoking). Researchers detected a prominent activation in the male in the right ventral striatum which is absent in the female. Image courtesy of Yale News