Radiology Must Be Part of Discussion on POC Ultrasound

Experts discuss the rising use of bedside point-of-care ultrasound (POC), which presents both opportunities and challenges for the medical community

The rising use of bedside or point-of-care (POC) ultrasound presents both opportunities and challenges for the medical community, along with a need for increased training in the modality for medical students and practitioners.

For radiologists, the growth in POC ultrasound among non-imaging specialties causes concern about lost business and shortfalls in patient care. Nevertheless, two leading authorities who presented the RSNA 2014 Controversy Session, “Point of Care Ultrasound: Is there an Owner or Do We All Just Rent?” stress that POC should not be viewed as a threat and may even present opportunities for radiologists to become more relevant in the ultrasound sphere.

“From the perspective of radiologists, there is plenty of fear and trepidation and in some cases anger about anybody but radiologists doing ultrasound,” said co-presenter Brian D. Coley, M.D., a pediatric radiologist at Cincinnati Children's Hospital and treasurer of the American Institute for Ultrasound in Medicine. However, he added, much of this fear and anger is unfounded and fails to recognize the potential benefits of POC ultrasound to medicine and the opportunity radiologists have to impact the discussion on this burgeoning modality.

“What if I told you that point-of-care ultrasound could be a good thing?” he asked. “There is real, evidence-based data showing that in the right hands with the right training, it's a very powerful tool for patient care.”

In only a few decades, ultrasound has evolved from refrigerator-sized machines on carts to relatively inexpensive devices that fit in the palm of the hand. In fact, the cost of ultrasound units has dropped from $40,000 for a cart-based machine to $7,000 for a hand-held unit in just five years, according to J. Christian Fox, M.D., a professor of clinical emergency medicine and director of instructional ultrasound at the University of California, Irvine.

This evolution, along with concerns over radiation exposure, has launched a boom in POC ultrasound that shows no signs of slowing. In a study published in the January 2014 edition of the Western Journal of Emergency Medicine, Dr. Fox wrote that affordability and improved image quality could make bedside ultrasound the new figurative stethoscope. “Besides the stethoscope, since the time of Hippocrates, there has been no technology that doctors use at the bedside that's had any impact on clinical diagnosis,” Dr. Fox said.

“The stethoscope is an antiquated device,” said Scott D. Solomon, M.D., a professor of medicine at Harvard Medical School in Boston. “Although we can learn an enormous amount with it, the capability offered by POC ultrasound far exceeds it.

“Handheld ultrasound didn’t exist until about 10 years ago,” Dr. Solomon added. “There are devices now that aren’t much bigger than an iPhone, with image quality as good as those produced by large machines 10 to 15 years ago.”

Among the benefits is the fact that POC ultrasound has no body region or organ of interest limitations, said Michael Blaivas, M.D., a professor of emergency medicine at the University of South Carolina Medical School. “POC ultrasound providers can scan anything and everything that is helpful to the patient in the clinical setting,” Dr. Blaivas said. “If a patient needs a biopsy, then ultrasound will be used to guide the needle. POC users can scan the eye looking for a detached retina. There is no limitation to the focused exam anatomically as far as relevant clinical questions.”

As a result, the modality is increasingly being used by emergency physicians, intensivists and anesthesiologists—among other specialties—in the U.S. and beyond.

Despite its expansion into non-radiology specialties, the prospect of radiology losing business is likely overblown, according to Dr. Coley. POC applications are for different issues, he said, such as resuscitations and other procedures where time is of the essence. “Ultrasound is one of the few areas in imaging where not everyone is trying to divide up the same pie,” he said. “Ultrasound volumes are not dropping in the radiology department, because point-of-care applications have made the pie bigger.”

Still, concerns persist over non-radiologist physicians doing ultrasound without adequate education, training and experience. Even the so-called “yes or no” questions answered in a focused ultrasound exam carry with them the possibility of false-negatives, Dr. Coley noted.

Practitioners should be well-trained in normal and abnormal sonographic findings, artifacts and proper use of the controls on the ultrasound machine to achieve good image quality, according Peter M. Doubilet, M.D., Ph.D., senior vice-chair of the Department of Radiology at Brigham and Women’s Hospital, Boston, and a professor of radiology at Harvard Medical School. “Otherwise, we will see a plethora of false positive diagnoses leading to inappropriate follow-up testing and treatment, false negative diagnoses leading to delays in diagnosis and management, and misguided needles leading to patient injuries.”

That training should begin in the first year of medical school, said David Bahner, M.D., director of ultrasound at the Ohio State University Department of Emergency Medicine in Columbus, who co-presented the Controversy Session on POC Ultrasound at RSNA 2014. “Ultrasound in medical education is growing,” he said. “Barriers exist, including a lack of space, equipment and financial support, but they can be overcome.”

Training needs to occur in two different realms: medical school and continuing medical education (CME), Dr. Solomon said. But it appears that won’t happen overnight. Dr. Bahner expressed concern about the slow pace of change, noting that almost a third of U.S. medical schools are lagging behind in bringing ultrasound training into the curriculum. He attributed the slow adoption to a problem common in medicine, which he described as a “cacophony of voices.”

“We're all speaking with different voices when we need to speak with one, and that's why a lot of healthcare is broken,” he said. As an example, Dr. Bahner noted that the POC ultrasound/ultrasound training is not yet on the agenda of the Liaison Committee on Medical Education, jointly sponsored by the Association of American Medical Colleges and the American Medical Association, as the recognized accrediting body for programs leading to medical degrees in the U.S.

With medical education struggling to catch up to the boom in ultrasound, it's more essential than ever that radiologists drive the discussion and ensure quality care, Dr. Coley said. “There has been a contentious history, but there also are many areas of collaboration,” he said. “For instance, the medical executive committee often will go to the radiologist and ask what the requirements should be for non-radiologists to use ultrasound. And if you volunteer to help, 99 times out of 100 you will be welcomed with open arms and you can direct the course for a particular institution.”

“Radiologists are finally coming around and saying, 'we have to be involved’,” Dr. Coley said. “It's not the same field it was 30 years ago and that's OK.”

But ultimately, coordination needs to occur among all specialties for POC ultrasound to realize its full potential, Dr. Bahner said. “The future of medicine needs to be built by the house of medicine rather than ‘an apartment complex’ of medicine with individual silos not working together in a coordinated fashion,” he said.

Added Dr. Fox: “We need to join together and set criteria for each medical specialty, as well as clear indications for the use of POC ultrasound and screening protocols.”

The American College of Radiology (ACR) issued a 2013 resolution on Point of Care (POC) ultrasound, stressing the need for training, credentialing and ongoing quality assurance for all healthcare providers performing and interpreting sonographic examinations.

“Targeted POC ultrasound can be useful as a limited bedside adjunct to the physical examination but is fundamentally different from comprehensive diagnostic ultrasound examinations such as those ordered by clinicians and performed in radiology departments with interpretation by radiologists,” according to ACR.

POC exams without formal training, adequate standards and documentation “can be detrimental to patient care, including the risk of the patient receiving an incorrect diagnosis from an improperly performed sonographic examination,” the organization stated. 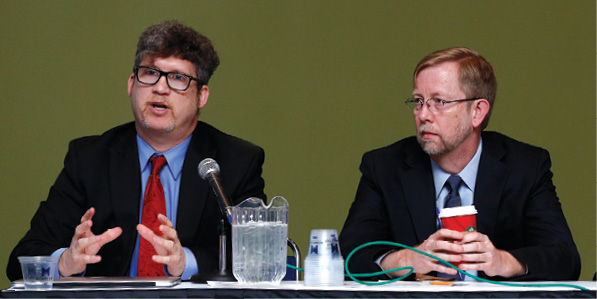 Bahner, Coley at RSNA 2014
MARY HENDERSON, is a writer based in Bloomington, Ind. Richard S. Dargan is writer based in Albuquerque, N.M. Both specialize in health and medicine.

Access the American Institute of Ultrasound in Medicine’s (AIUM) Education Portal Clearinghouse of resources designed to facilitate the integration of ultrasound into medical school education at AIUM.org.