Outpatient advanced imaging is shifting from private imaging centers to higher-cost hospital facilities, according to a new study, raising concerns about reduced access for patients and increased costs to payers.

In the study, first presented at RSNA 2014, researchers from Thomas Jefferson University in Philadelphia analyzed Medicare data from 2000 to 2012 and determined procedure utilization rates per 1,000 beneficiaries for each year.

Total utilization rates for advanced imaging in private offices rose 111 percent from 2000 to 2008, and then declined for three straight years—a drop attributed to code bundling in echocardiography, nuclear cardiac exams and CT of the abdomen/pelvis. Despite no further code bundling, the decline continued in 2012, while the hospital outpatient rate increased from 418 to 426 per 1,000 beneficiaries.

“Since 2011, there have been small increases in utilization rates in hospitals even as private offices continue to decline,” said presenter and study author Bhavik Patel, M.D., a third-year resident at Thomas Jefferson University.

The ratio of private office to hospital outpatient advanced imaging fell from 1.67 in 2008 to 1.11 in 2012. The shift was most apparent in MRI, echocardiography and nuclear medicine, and to a lesser degree in ultrasound and CT.

“Medicare has been dropping reimbursement for mostly the technical component and to a lesser extent the professional component of advanced imaging,” said David C. Levin, M.D., professor and chairman emeritus of the radiology department at Thomas Jefferson University Hospital. “As they drop reimbursements, we’re seeing private offices begin to close, so the work is shifting to hospitals.”

The shift appears to be an unintended consequence of measures taken by the Centers for Medicare and Medicaid Services (CMS) to reduce healthcare costs by attempting to slow the rate of imaging growth, according to the researchers.

A 2009 study by Dr. Levin and his Thomas Jefferson University colleague Vijay M. Rao, M.D., found that while total outpatient imaging rates increased by 45 percent from 1996 through 2006, the hospitals’ share of the market dropped as more and more patients opted for the convenience and atmosphere of private centers.

The growth in private centers positioned the facilities as prime targets for cuts, even though the actual source of much of the growth was a loophole in the Stark Law that allowed physicians to refer patients to imaging equipment that they owned. The Stark Law governs physician self-referral for Medicare and Medicaid patients.

“Physicians who own their own equipment used imaging at five to seven times the rate of physicians who did not own their own equipment and referred patients to others,” said Dr. Rao, RSNA Board Liaison for Information Technology and Annual Meeting. “Because of rising costs, CMS cut reimbursement per unit rather than addressing self-referral, and the upshot of all this is that reimbursement has been slashed for offices.”

The Deficit Reduction Act of 2005, which went into effect in January 2007, sowed the seeds for this recent shift by cutting reimbursements for Medicare private office outpatient imaging so that it was on par with hospital reimbursement. “Outpatient centers took a lot of the hit through things like code bundling and the utilization factor, and now we’re seeing the consequences,” Dr. Rao said.

The consequences for imaging centers, in the form of closures, layoffs and postponed plans for equipment acquisition, are already affecting patient access, according to the researchers. “Reimbursements have been slashed so substantially that the technical revenues barely cover operating costs, so many private offices have been closing their doors,” Dr. Rao said. “More and more patients are going to hospitals for advanced imaging, which ultima tely will cost the payers more money because the rate of reimbursement is higher at hospitals.”

Additionally, groups at imaging centers may struggle to upgrade or get new equipment, which could affect image quality and interpretation, Dr. Rao said. And patients who have opted for insurance plans with higher deductibles may put off getting necessary tests in order to save money.

“The goal of these cuts is to reduce costs, but if the hospital is paid more for patient services, then the costs may actually go up,” Dr. Patel said. He likened the shift in advanced imaging to what occurred in cardiology in recent years after reimbursements for echocardiography and myocardial perfusion were cut.

“The literature suggests that many cardiology offices closed or were bought out by hospitals,” he said. “Radiology is susceptible to the same macroeconomic forces.”

“The Medicare program needs to stop cutting reimbursement for private imaging and equalize payments to hospital outpatient departments and private offices,” Dr. Levin said. “CMS is already talking about it, but it’s hard to make any changes because the hospital lobby will fight them.”

In the meantime, the researchers said they will continue to monitor the annual utilization rates, although they do not expect the shift in outpatient advanced imaging utilization to change anytime soon. “We have more work to do, particularly in studying the impact of reimbursement cuts on CT, but we’ve painted a picture of the link between cuts and shift in imaging, and it’s not unreasonable to think trends will continue,” Dr. Patel said.

“I don’t see anything right now that will reverse the trend, but I’m hoping that this research will bring attention to the fact that it’s not advantageous to continue on this track,” Dr. Rao added.

Effective January 1, 2015, CMS is using a new modifier to collect data on the shift in advanced imaging toward hospital-based physician practices. Reporting of the two-digit “PO” modifier “Services, procedures and/or surgeries furnished at off-campus provider-based outpatient departments” will be voluntary for one year before being required beginning on January 1, 2016.

CMS hopes to use the data collection to gain a better understanding of which practice expense costs typically are incurred by physician-owned imaging centers, which are incurred by the hospital, and whether there is a significant difference in resource costs given the differences in ownership arrangements. The move comes after the Medicare Payment Advisory Commission’s (MedPAC) comments that CMS should set hospital outpatient payment rates at the same rate as physician offices when the office rates are the lowest. 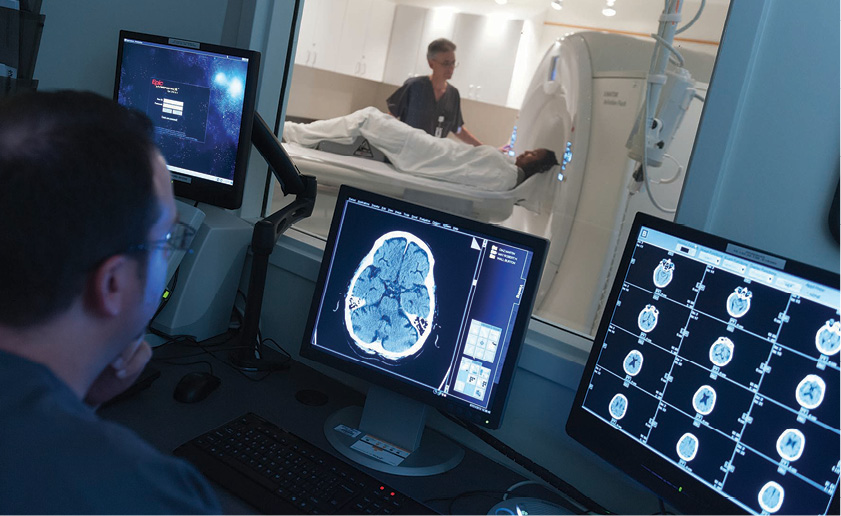 The shift in advanced imaging from private imaging centers to hospitals is already affecting patient access, experts say. "Reimbursements have been slashed so substantially that the technical revenues barely cover operating costs, so many private offices have been closing their doors," said Vijay M. Rao, M.D.
Richard S. Dargan is a writer based in Albuquerque, N.M., specializing in healthcare issues.
Editor's Picks