Researchers at Johns Hopkins University School of Medicine used the novel MR imaging technique to determine with 95 percent statistical certainty a leakage amount associated with the side effects of tissue plasminogen activator (tPA) treatment, which breaks down blood clots. Currently, tPA is the only FDA-approved treatment for ischemic stroke.

Published online May 2014 in the journal Stroke, the research could be a first step in refining the almost 20-year-old FDA protocol requiring that tPA treatment be administered within a three-hour window after a stroke, said Richard Leigh, M.D., lead author, who served as an assistant professor of neurology and radiology at Johns Hopkins during the research.

More recent guidelines, including criteria from the European Cooperative Acute Stroke Study (ECASS), recommend tPA use within 4.5 hours of a stroke in some patients. ECASS guidelines are not FDA-approved.

“The study highlighted an important data point that we aren’t using,” said Dr. Leigh, who is now an assistant clinical investigator with the National Institute for Neurologic Disorders and Stroke (NINDS) at the National Institutes for Health. “The hope is that, based on MRI scans, we can treat patients who are not currently eligible for tPA. That’s really the next big question.”

Researchers analyzed the data of acute ischemic stroke patients provided by the Stroke Imaging Repository and Virtual International Stroke Trials Archive. The images were then divided into three groups according to ECASS criteria: no hemorrhage, hemorrhagic infarction and parenchymal hematoma. Next, researchers developed an algorithm that uses an arrival time correction quantitatively to remove the effects of blood flow and dispersion from the recorded signal, allowing an index related to BBB permeability to be estimated.

The analysis quantified a threshold of BBB damage after which tPA treatment harms a patient. “When a mean permeability was elevated to 20 percent, then that was associated with the larger hemorrhages,” Dr. Leigh said.

Another key finding: the study quantified that not all BBB damage is the same, Dr. Leigh said. The detail provided by MR imaging scans enabled researchers to classify the severity of BBB damage. “Mild blood-brain-barrier damage was not necessarily a bad thing according to our analysis, which is a little counterintuitive because it is currently thought of as all bad,” Dr. Leigh said. The idea of “mild blood-brain barrier damage” points to the need for further study, he said.

Expanding the tPA treatment population is significant considering that less than 10 percent of stroke patients receive the treatment, according to Max Wintermark, M.D., a professor of radiology and chief of neuroradiology at Stanford University and stroke expert who serves as chair of the imaging working group of the NINDS-funded stroke clinical trial network (StrokeNET).

The Johns Hopkins study provides an “exclusionary approach” by showing which patients should not receive tPA treatment even within the three-hour treatment window, Dr. Wintermark said. He said he is also encouraged that the study explores the role of MR imaging in providing biomarkers to guide treatment. “Sometimes patients wake up with their symptoms, so we don't know when they started. In those situations, imaging plays an important role,” he said.

Nevertheless, the technique could have limitations. In an already time-critical situation, an MR scan adds more time to the process as opposed to a CT scan, which is currently recommended under the American College of Radiology (ACR) Appropriateness Criteria for Cerebrovascular Disease for determining whether tPA treatment should be administered.

Dr. Leigh acknowledges the time considerations but said the technique is “not technically difficult” once the appropriate software has been put in place. Implementation in a clinical setting would require an MR imaging manufacturer to include the technique within the technology’s analysis functions. “You could pull images off the scanner and analyze them on a workstation, but that adds more time,” Dr. Leigh said.

Even if some MR imaging protocols last only 6 minutes, Dr. Wintermark pointed out that the routine does not include the permeability analysis required by this new technique. “You have to work on all the other logistic issues in a real-time hospital setting,” he said.

Dr. Leigh agrees on the need for more biomarkers, adding that this study provided “a new piece of data that will help us in our goal of treating as many stroke patients as safely as possible. But it’s really one piece of data that is part of the larger puzzle.”

The RSNA Alexander R. Margulis Award for Scientific Excellence was presented Monday to Anna E.H. Zavodni, M.D., and colleagues, for the article, “Carotid Artery Plaque Morphology and Composition in Relation to Incident Cardiovascular Events: The Multi-Ethnic Study of Atherosclerosis (MESA)," published in Radiology in May 2014.

Named for Alexander R. Margulis, M.D., a distinguished investigator in the science of radiology, the award recognizes the best original scientific article published in a particular year in Radiology. The Margulis Award Nominating Committee and the Margulis Award Selection Committee review published manuscripts based on their novelty, quality, importance, and potential scientific and clinical impacts.

The study investigated the predictive value of a number of MRI features in determining the risk of subsequent cardiovascular events in an asymptomatic population. A total of 946 participants in the Multi-Ethnic Study of Atherosclerosis (MESA) were evaluated with MRI. Patients were followed for an average of 5.5 years to determine the subsequent occurrence of major cardiovascular disease, including fatal and non-fatal myocardial infarction and cerebrovascular disease.

The paper was the first population-based, prospective study to determine if vulnerable plaque features shown on MR images add to the risk of a cardiovascular event beyond the traditional risk factors and adds to the growing body of information on biomarkers that may be used to determine the risk of major cardiovascular disease in asymptomatic individuals.

Cardiovascular events occurred in 59 of the patients in the study. Abnormal thickening of the carotid artery wall and the presence of a lipid core and calcium in the internal carotid artery on MRI were significant predictors of subsequent events. A lipid core was present in almost half of the patients who had an event, compared with only 17.8 percent of those who did not have an event. 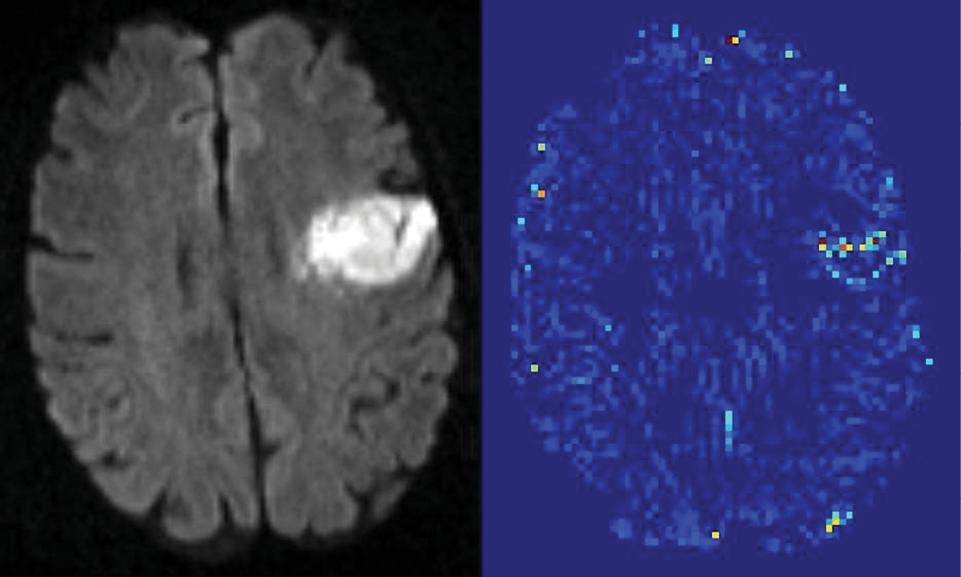 Shown are two different MRI images of the same part of the brain of the same patient. The image on the left shows the stroke (bright area), and the image on the right is the permeability image showing blood-brain barrier damage in the area of the stroke. Images courtesy of Johns Hopkins Medicine.
Ed Bannon is a Chicago-based freelance writer.