An inexpensive, disposable surgical cap effectively reduces radiation exposure to the brains of interventionalists and assistants, according to new research presented at RSNA 2014.

Radiologists and technologists involved in interventional procedures are chronically exposed to ionizing radiation. Irradiation of the cranium, even at low doses, can increase the incidence of all cerebral neoplasms, including meningioma. A 2013 study identified 31 interventionalists who developed brain cancer and found that 85 percent of cases were left-sided tumors—the physician’s left side is typically closer to the radiation source during interventional procedures.

Imgen, the Las Vegas-based research arm of the Nevada Imaging Centers, recently evaluated the radioprotective properties of the No Brainer®, a cranial radiation protection surgical cap manufactured by RADPAD of Kansas City. The disposable surgical caps are available in four levels of protection based on the thickness of the heavy metal shielding. At 0.375 millimeters, the Red level provides the thickest lead equivalent shield, while the Blue level’s 0.07-millimeter-thick shield is the thinnest.

Dose reductions for the procedures ranged from 83 percent for the Blue level to 100 percent for the Red and Orange levels. “Both the phantom study and the actual procedures demonstrated statistically significant ionizing dose reductions to cranium when using the protective caps,” said presenter Luke A. Byers, D.O. “Increased protection correlated with increasing thickness of radiation shielding material.”

The interventionalist and the assistant reported that the surgical caps were minimally different from those typically worn for interventional procedures and there was no reported discomfort even after a full day of wear. “The study results show you can use disposable surgical caps in an interventional setting to significantly reduce or completely negate the amount of radiation that the cranium is exposed to,” Dr. Byers said. “Hopefully, this device will stem the increasing number of interventionalists reported with cerebral malignancies.”

The caps cost about $5 each and can be used for multiple procedures before disposal, according to radiologist and study co-author William W. Orrison, M.D., M.B.A. The thinner, lighter caps are ideal for brief procedures, while the thicker ones would be recommended for longer interventions, Dr. Orrison said.

In the next phase of the research, the investigators plan to see if the caps can help reduce cranial dose to patients during interventional procedures. 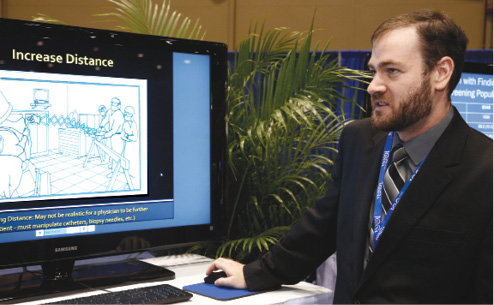 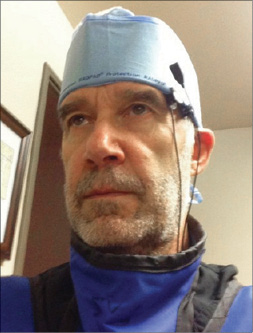 In his RSNA 2014 research, Luke A. Byers, D.O., demonstrated the effectiveness of disposable surgical caps that are available in four levels of protecon based on the thickness of the heavy metal shielding. Image courtesy of Dr. Byers.
Richard S. Dargan is a writer based in Albuquerque, N.M., specializing in healthcare issues.
Editor's Picks