The technique has also been a source of contention—both in the clinic and in the courtroom, according to researchers who addressed the question, “Is DTI ready for prime time?” during an RSNA 2014 Controversy session.

Not yet, according to presenters Pratik Mukherjee, M.D., Ph.D., a professor of radiology and bioengineering at the University of California, San Francisco, and Michael Lipton, M.D., Ph.D., associate director of the Gruss Magnetic Resonance Research Center at the Albert Einstein College of Medicine and medical director of MRI at Montefiore Medical Center in New York City.

Dr. Mukherjee said that one point of controversy surrounding the use of DTI centers on the question, “Is this really helpful on an individual patient basis as far as being able to diagnose a mild TBI concussion and say something useful about how a patient will progress afterwards?”

“And this really hasn’t been validated yet in multi-center trials that are designed to measure its specificity, sensitivity and utility of predicting outcomes in patient—all of the things you would want in a scientific test,” Dr. Mukherjee said.

What was called DTI almost 20 years ago is much different than DTI now, said Dr. Mukherjee. “It is far superior in terms of image quality and measurement precision, and in many other ways that are helpful for diagnosis. I’m optimistic long term that something good is going to come out of this, but right now people are treating this like it’s a done deal, and it’s not.”

He said he is currently conducting the imaging for a multi-center study “and one of the biomarkers we are looking at is DTI.” He hopes the study will give researchers more information about how DTI can be standardized across different U.S. centers so that it can be compared to a normative population in order to get reliable results with good specificity and sensitivity for diagnosis and outcome prediction.

Is DTI Being Fairly Assessed?

Turning the question around, Dr. Lipton asked, “Are radiologists ready for DTI?”

For one thing, he pointed out, DTI requires radiologists to “deal with things like data quality, data consistency, analysis and even interpretation at a quantitative level, which is very different from the way most radiologists are trained.”

DTI is being held to an uncommonly high standard and is being assessed in a way that other imaging techniques haven’t been, Dr. Lipton added. “But what I think is important in terms of critically assessing the utility of DTI, is that other things we basically take for granted and do all the time in terms of relying on imaging findings are supported by much, much less evidence.”

Dr. Lipton referred to a study that he said demonstrates that more than 70 percent of what radiologists do in the reading room has no evidence behind it. “Does that mean it’s not valid, or that it’s not useful?” he asked. “No, it means that the evidence doesn’t exist and is based on opinion and experience.”

“The bottom line is that there is quite a lot of evidence supporting the use of DTI in detecting abnormalities in the brain,” Dr. Lipton continued.

Dr. Lipton agreed that imaging continues to be used improperly in the courtroom. “I think that DTI and quantitative imaging and quantitative diagnostics in general—because there are other things outside of imaging that have a similar challenge—is an approach that really raises the stakes because it is revealing an injury that we know is there, but we haven’t had a way to really put a finger on it.” 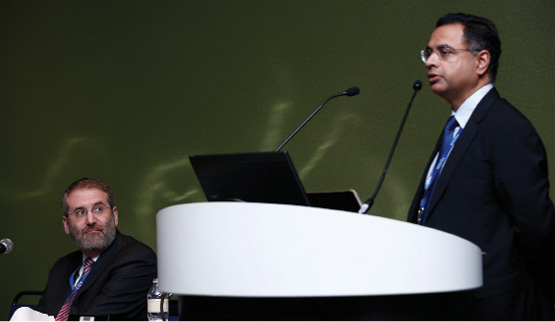 Michael Lipton, M.D., Ph.D.,(left) and Pratik Mukherjee, M.D., Ph.D., debated the use of diffusion tensor MRI in diagnosing and treating traumatic brain injury during an RSNA 2014 Controversy Session.
MIKE BASSETT is a writer based in Holliston, Mass., specializing in health and medicine.
Editor's Picks