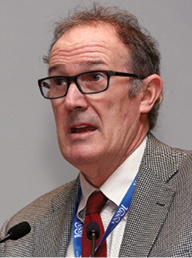 Experience and expertise are key when weighing decisions about imaging the structures of the head and neck, according to head and neck imaging experts at RSNA 2014 who discussed and debated available imaging options for three clinical scenarios: parathyroid surgery, cancer surveillance and hearing loss in one ear due to a suspected tumor.

The first scenario involved localization of the parathyroid tissue for minimally invasive parathyroid surgery (MIPS). At one time, surgeons opened up and explored the neck to localize the often-difficult-to-find glands, but improvements in surgical technique and imaging technology have enabled a more focused approach—important considering that in most people with hyperparathyroidism only one gland of the four is diseased.

With the help of 4DCT, surgeons can access the parathyroid through a tiny incision and remove a single lesion, said C. Douglas Phillips, M.D., of Weill-Cornell Imaging at New York-Presbyterian Hospital in New York City. The exam can be learned quickly, is easily interpretable and offers a volumetric study, which is very important when imaging parathyroid disease, he said.

“You need to have every millimeter of the parathyroid evaluated,” Dr. Phillips said. “The problem with ultrasound and nuclear medicine is that you may not see every lesion.”

Dose reduction measures from manufacturers have helped mitigate the concern over radiation exposure from CT, Dr. Phillips added. “Our dose for a three-phase exam today is lower than the dose we previously had for a single-phase CT exam,” he said.

Laurie A. Loevner, M.D., from the University of Pennsylvania Medical Center in Philadelphia, argued against the use of 4DCT. Surgery has become much easier for patients, she said, with shorter operating times and no general anesthesia requirement. “The take- home message is that we have a 95 percent success rate without any imaging, and only a minority of cases requires any imaging other than sestamibi and ultrasound,” she said.

There was considerably less controversy in the second segment of the session, as presenters Barton F. Branstetter, M.D., from the University of Pittsburgh Medical Center, and Hugh D. Curtin, M.D., of Massachusetts Eye and Ear in Boston, largely agreed on the value of PET/CT for surveillance of treated head and neck squamous cell carcinoma. PET/CT detects cancer recurrence sooner than other methods and is cost-effective in part because it prevents unnecessary surgery, Dr. Branstetter said.

Expense, availability and patient tolerance are the chief problems with PET, Dr. Curtin said. The leading alternatives are CT with contrast and MRI with contrast, he said. He described how his institution stratifies patients into different risk categories, and those at medium risk for recurrence undergo PET/CT.

The final segment of the session focused on the use of gadolinium-based contrast agent in MRI of the internal auditory canal (IAC) for suspected vestibular schwannoma, a benign tumor of the nerve that conducts hearing and balance information from the inner ear to the brain. MRI with contrast is considered the best imaging option, but gadolinium has been associated with side effects in patients with compromised kidney function. A T2-weighted approach is now available that enables visualization of the nerve without contrast.

William P. Dillon, M.D., of the University of California in San Francisco, said the non-contrast approach requires experience and a “good eye,” as it can miss lesions outside of the IAC and has a high potential for false-negative findings. “In some cases you can’t identify a very tiny tumor or other pathology without contrast,” he said. “If I want a quick, definitive answer and I don’t want to have to bring people back for additional imaging, I’m going to use contrast.”

In addition to the gadolinium exposure, added time and expense are drawbacks of contrast- enhanced MRI, said Franz J. Wippold II, M.D., from Washington University School of Medicine in St. Louis. The T2-weighted approach takes only 4.5 minutes—compared to 25 for a limited gadolinium-enhanced scan—and improvements in the approach have reduced the rate of false-negative findings. In addition, the T2-weighted MRI eliminates “the small but real chance of adverse effects from contrast,” he said.