Along with expanding into numerous medical applications, 3D printing has even made its way into paleontology where researchers can create accurate copies of fossilized bones

An emerging technology, 3D printing is rapidly expanding from manufacturing into a variety of medical-related applications. Physicians—especially radiologists who work with 3D datasets and surgeons planning treatments—can readily appreciate its potential. 3D printing has even made its way into paleontology, where researchers can now create accurate copies of fossilized bones.

At RSNA 2013, researchers demonstrated how 3D printing was used to aid orthopedic surgeons in pre-operative planning. In addition, the surgeons showed the 3D models to their patients to help them better understand their condition and the plan for treatment.

In his research, “3D Printing in the Pre-operative Assessment of Subtalar Coalitions Compared to 2D and 3D CT Datasets,” Dr. Starosolski focused on CT images from 12 patients ages 8 to 17 who had been previously diagnosed with subtalar coalition using traditional 2D CT imaging. The images were used to segment the calcaneus and talus for 3D printing.

To compare the findings from the 3D models and the 2D images, researchers estimated the area of coalition in four ways: a radiologist reading conventional CT data; curved multiplanar reconstructions; an orthopedic surgeon visually examining the 3D print; and breaking apart the 3D print and physically measuring the area.

Coalition areas were classified as greater than or less than 50 percent, or as needing further assessment. Using Cohen’s Kappa statistic, researchers estimated the correlation between the methods after two experts reviewed the anonymous data sets. The Kappa statistic indicated substantial agreement (0.64) between manual reads and the 3D print and moderate agreement among the manual reads (0.4).

The research did have drawbacks, notably a limited number of cases. “If we expanded the cohorts for the study, I wouldn’t expect to have drastically different results,” Dr. Starosolski said. He added that while the 3D model would aid in a surgeon’s decision-making process regarding potential surgery, the model cannot be solely relied upon for the decision.

More recently, Dr. Starosolski has been extending the technique to other surgical planning purposes, including cranial distraction and congenital heart defect repair.

For patients, who often do not understand the technical terms or the images they are shown, the 3D model can serve as a valuable educational tool, Dr. Starosolski said. It provides a strong visual element that helps the layperson understand the object and its scale. “On the screen, objects are often rendered in a variety of ways,” he said. “For the brain, it can be difficult to assimilate it all. But when you have a real object in your hand, you can understand it all very quickly.”

In Germany, data from CT scans coupled with 3D printing proved valuable in identifying fossilized dinosaur bones and for providing accurate copies that could be shared among paleontologists.

In a study published in the March 2014 issue of Radiology, researchers at Charité Campus Mitte in Berlin, Germany, were able to separate fossilized bone from surrounding sediment to produce a 3D model of the image itself.

“This process is much faster than conventional preparations for paleontologists,” said Ahi Sema Issever, M.D., of Charité’s Department of Radiology and lead author of the Radiology study. “Another benefit is you don’t harm the original object, which can be a real challenge for museum workers who are studying rare objects. Often, their painstaking work can take weeks or months and there is always the danger of damaging an object irreversibly.”

Dr. Issever and researchers from the nearby Museum für Naturkunde, a major natural history museum in Berlin and the 3D Laboratory of the Technische Universiat, applied the method to fossils. During a World War II bombing raid, the museum collapsed and fossils stored in the basement were scattered among the rubble and some of the labeling was destroyed. In many cases the fossils had been identified using similar but not identical labeling systems, making it a difficult and time-consuming process for paleontologists to recreate.

Working with the museum’s Oliver Wings, Dr. Rer. Net., Dr. Issever and her team studied an unidentified fossil using a 320-slice CT scanner, which allowed for a clear image of the fossil despite the plaster cast surrounding it as a protection from damage while in storage.

The researchers compared the CT scan with the old excavation drawings and traced the fossil’s origin to a major archeological dig in Germany from 1910 to 1927. Originally, Dr. Wings believed the fossil was from an excavation in Africa because of its labeling. “On the excavation drawing, however, it looked exactly the way we scanned it,” Dr. Issever said. “We were able to clearly show that it had been mislabeled.”

Researchers then went a step further, collaborating with Ben Jastram at the 3D Laboratory of the Technische Universiat, by utilizing a 3D printer to create an identical replica of the fossil. Digital models of the objects can now be transferred rapidly among researchers, and endless numbers of exact copies can be produced and distributed, greatly advancing scientific exchange, Dr. Issever said. The technology also potentially enables a global interchange of unique fossils with museums, schools and other settings.

Dr. Issever noted that the findings come at a time when advances in technology and cheaper availability of 3D printers are making them more common as research tools.

“What we wanted to show is that you can actually prepare an object, a fossil, virtually and you can make a 3D print and visualize the fracture lines and take measurements without risk of damaging the original object,” she said. “And you can copy the dataset onto a DVD and send it to a colleague on a different continent who can make their own 3D print; it is much easier to exchange data in this way.” 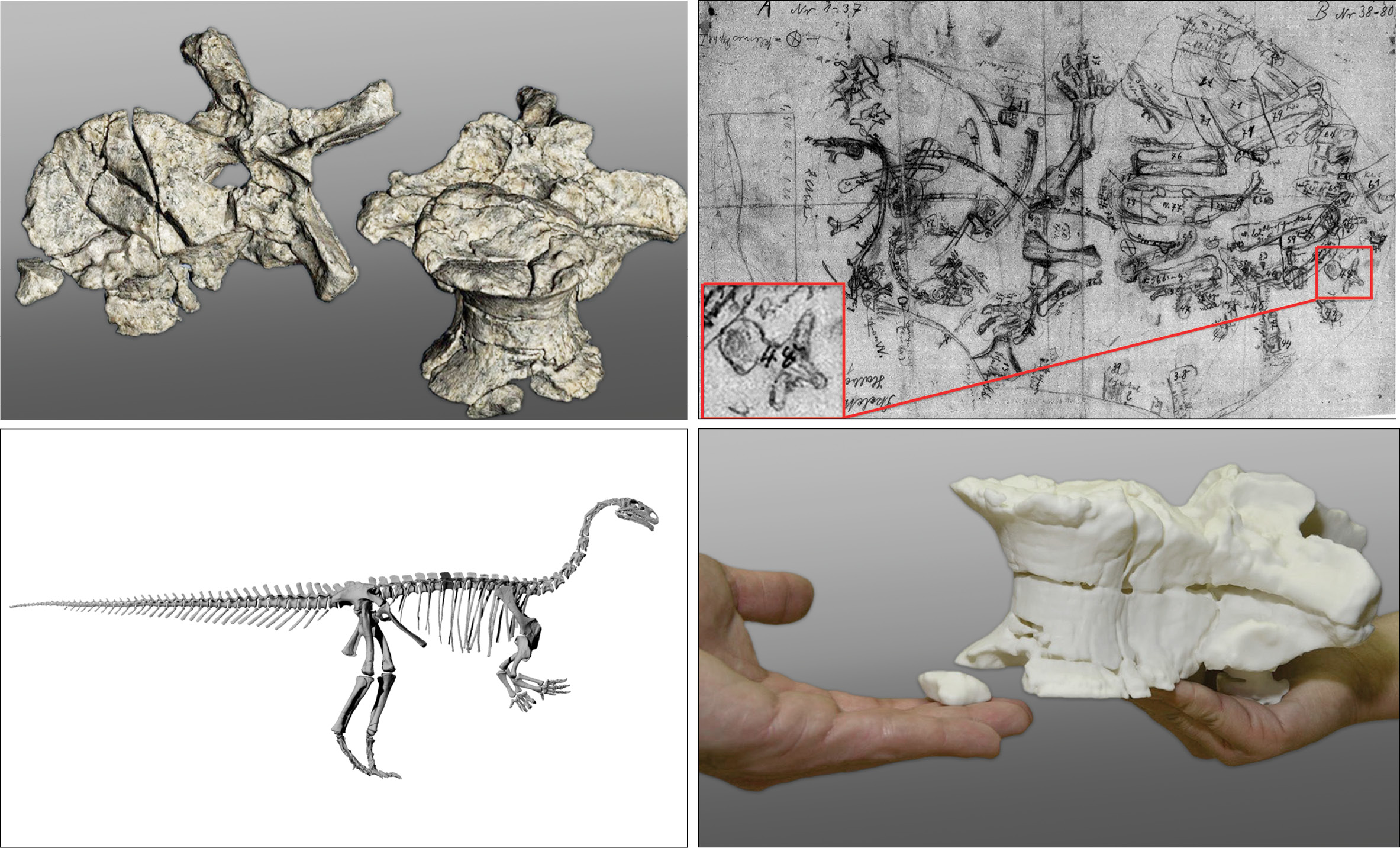 Along with expanding into medical-related applications, 3D printing is even making its way into paleontology, where researchers are using data from CT scans with 3D printers to make accurate copies of fossilized bones. Top left: Virtual 3D reconstructions of fossilized vertebral body after surrounding sediment matrix and protective plaster have been digitally removed through segmentation of CT dataset; Top right: A digitized image of an original excavation field map from Halberstadt, 1923. Inset is magnification of fossilized vertebra; Bottom left: An illustration of a Plateosaurus skeleton; Bottom right: On the Cover—A 3D print of a vertebral body. (Radiology 2014:270;3;864-871) 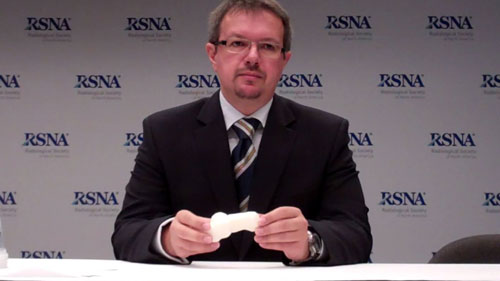