The fascinating, often unpredictable history of radiology holds important lessons for today’s radiologists, according to a number of experts who are working to preserve and celebrate the story of the profession.

“Understanding the history of radiology puts our work in context, helps us to avoid cynicism and gives us a sense of meaning,” said Adrian M. Thomas, M.D., F.R.C.R., co-author of the 2013 book, “The History of Radiology” and a radiologist at the Princess Royal University Hospital in Kent, U.K. “We are not isolated individuals living in the present: We have a past and a future.”

“It is all well to concentrate on the technical aspects of radiology, but it is also important to understand the cultural and historical aspects of what we do and how we got here, and to learn about the struggles of others and avoid mistakes of the past,” added Arpan Banerjee, M.D., co-author of “The History of Radiology” and a radiologist at Birmingham Heartlands Hospital, U.K., and chairman of the British Society For the History of Radiology.

In 2011, Drs. Thomas and Banerjee helped found the International Society for the History of Radiology (ISHRAD), the first international society dedicated to the history of radiology and radiologic technology. The organization recently held its annual meeting in Vienna, where members outlined an agenda for the coming year that includes developing a book celebrating the International Day of Radiology (IDoR); a military radiology-themed meeting in Verona, Italy; a historical session at the meeting of the Argentinean Society of Radiology in Buenos Aires; and visit to RSNA 2014, the 100th Scientific Assembly and Annual Meeting (See sidebar, here).

For Dr. Thomas, the motivation to preserve history stems from what he calls “an awareness of the centrality of radiology to the patient pathway.” He was in medical school the year CT was announced, and he trained in radiology at Hammersmith Hospital in London during the early days of the institution’s groundbreaking MR imaging work.

“I have seen a complete transformation in patient care during my career,” he said. “The younger generation is not aware of how much things have transformed.”

Dateline: Radiology by the Numbers

Indeed, a look back at radiology history reveals a remarkable number of advances over a relatively short amount of time. In the year after Wilhelm Conrad Roentgen’s 1895 discovery of the X-ray, several books and more than 1,000 papers relating to the X-ray were published. The medical possibilities of the technology were quickly apparent, although the 45-minute exposure times of early radiographs made fluoroscopy a more viable option—something the renowned inventor Thomas Edison recognized.

“Edison was the person who really jump started radiology,” said Ronald L. Eisenberg, M.D., J.D., a professor of radiology at Harvard Medical School and Beth Israel Deaconess Medical Center in Boston and author of the 1992 book, “Radiology: An Illustrated History.” “His display of the fluoroscope at the Electrical Exhibition in New York City in 1896 created a public sensation.”

Alongside the breathtaking promise, dangers emerged. Edison’s chief assistant, Clarence Dally, died from disease brought on by repeated exposure to radiation. Some scientists blamed electrical currents from the machines, but the experiments of a dentist named William Herbert Rollins proved that X-rays were the culprit. “Williams Rollins is one of the people who was very important to the history of radiology, but has largely been forgotten,” Dr. Eisenberg said.

With Rollins and others focused on improving the safety of X-ray examinations, the technology spread quickly. Soldiers in the Boer War (1899-1902) in South Africa pedalled stationary bicycles to generate electricity to run the X-ray machines. During World War I, Marie Curie developed and equipped 18 X-ray cars, known as “little Curies,” with engines that supplied the current for the X-ray apparatus.

“Madame Curie was better known for developing the radiological car as a mobile X-ray unit than she was for the discovery of radium,” Dr. Eisenberg said.

The early ranks of radiologists were made up of surgical interns who had grudgingly agreed to help run the X-ray machines. But the profession quickly grew in esteem thanks to the formation of professional societies like the American Roentgen Ray Society founded in 1900, and RSNA, formed as the Western Roentgen Society in 1915. Radiologists helped speed evolution of the specialty by availing themselves of the latest equipment, like the improved X-ray tube developed at General Electric’s research laboratory by physicist William D. Coolidge in 1913.

“Early radiologists were able to see the potential of the Coolidge Tube to treat under the skin, and this led to a boon in radiation therapy,” Dr. Eisenberg said.

The practice of incorporating new and improved technologies into medical practice continued throughout the 20th century. Medical ultrasound grew from radar and sonar, CT was made possible with computers and MR imaging arose from nuclear magnetic resonance research.

“The developers of the hardware for CT and MR were not radiologists,” Dr. Eisenberg noted. “They had to coordinate their efforts with radiologists to transform basic science to a modality that would have clinical usefulness.”

“All of the various discoveries fit together, enabling developments that were not necessarily predictable,” Dr. Thomas added. “For example, the beginning of interventional radiology came at the end of a long series of developments including contrast media, the Seldinger technique, catheters and wires, plastics and X-ray television.”

Technology played an important role in the progress of radiology, but ultimately it was the power of creative thinking that enabled major advances. The best ideas often came from unlikely sources, according to Dr. Banerjee.

“One thing that stands out in the history of radiology is how many of the pioneers were considered odd, bizarre people,” he said. “They succeeded through great determination, often in the face of skepticism and hostility.”

A prominent example was ultrasound pioneer Ian Donald, M.D., who earned the disparaging nickname “Mad Donald” for his interest in gadgets and his belief that technology previously reserved for detecting cracks in metal could be used on patients. Ultrasound has become the most commonly used imaging modality.

CT pioneer Sir Godfrey Hounsfield faced similar suspicion trying to launch his inventions in the clinical sphere. When told that the long-haired, mustachioed Hounsfield wanted an appointment, one doctor reportedly asked, “Why should I meet with such a crank?” Fortunately, James Ambrose, M.D., chief of radiology at Atkinson Morley’s Hospital in London, recognized the potential of Hounsfield’s work and set him up with an office and equipment. Hounsfield went on to win the Nobel Prize, becoming one of the few laureates without a university degree.

“Hounsfield was met with hostility initially, but people were astounded when they saw his findings,” Dr. Banerjee said. “His work revolutionized how medicine is practiced around the world.”

The achievements of Hounsfield, Dr. Donald and others set the stage for the rapid advances of recent decades that have poised the profession for even more dramatic growth in the future.

“None of these advances would have happened without the discovery of X-rays and the curiosity and ingenuity of the pioneers,” Dr. Thomas said.

RSNA’s pivotal role in the history of radiology will be celebrated at RSNA 2014, the 100th Scientific Assembly and Annual Meeting. Meeting attendees are invited to explore the Centennial Showcase, an onsite experience that lets attendees see, hear and touch the advancements that shaped radiology. Also on tap is the Sip & Savor Social, a “celebration of the century” featuring drinks, entertainment and tastings by some of Chicago’s top restaurants. Admission to the Centennial Showcase is included with meeting registration. Tickets for the Sip & Savor Social are available for $40 and can be purchased during meeting registration.

Throughout 2014, RSNA News is featuring Centennial Snapshots—a look back at milestones in RSNA’s history—and will report on RSNA’s historic anniverary in a feature story in the October-November 2014 issue. 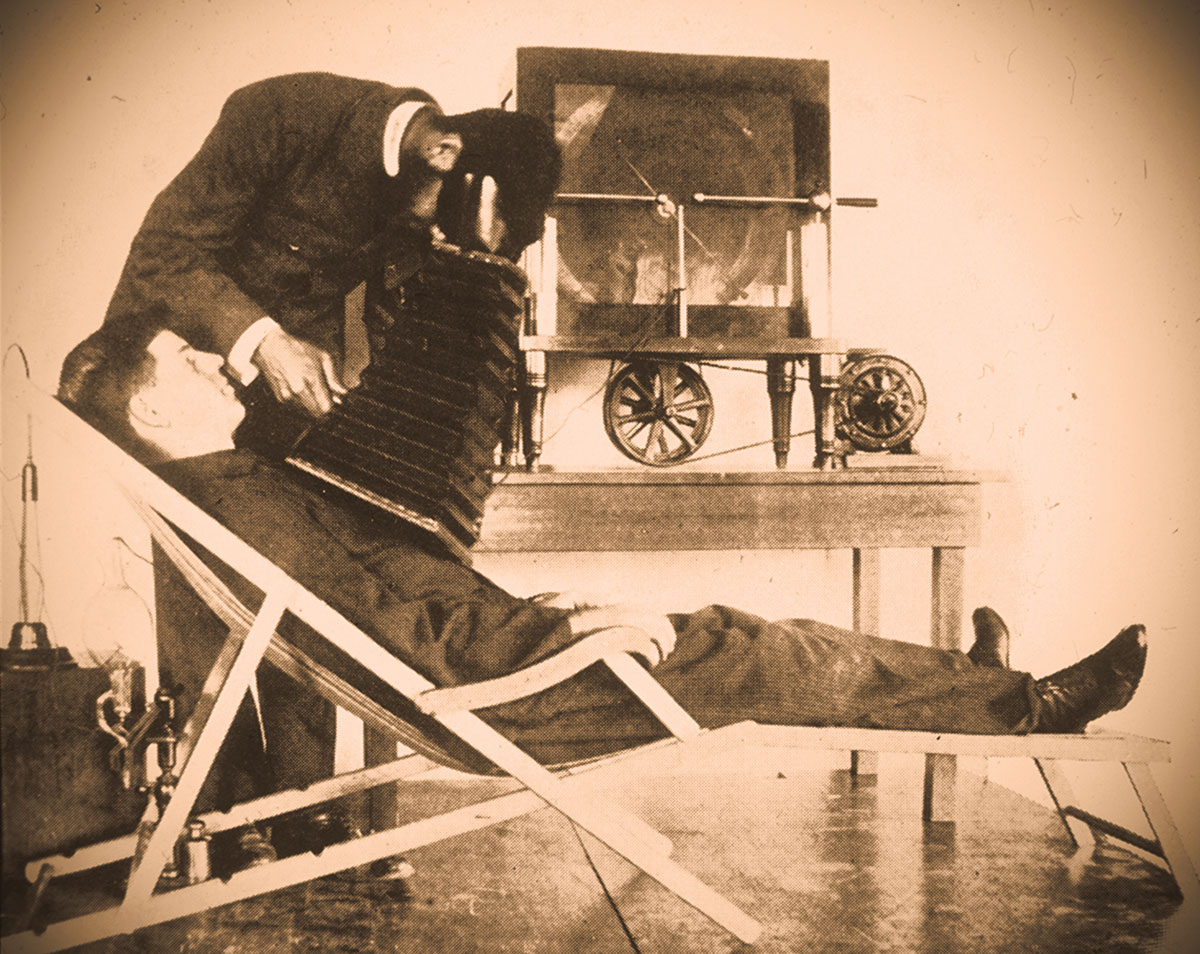 Richard Dargan is a writer based in Albuquerque, N.M., specializing in healthcare issues.
Editor's Picks